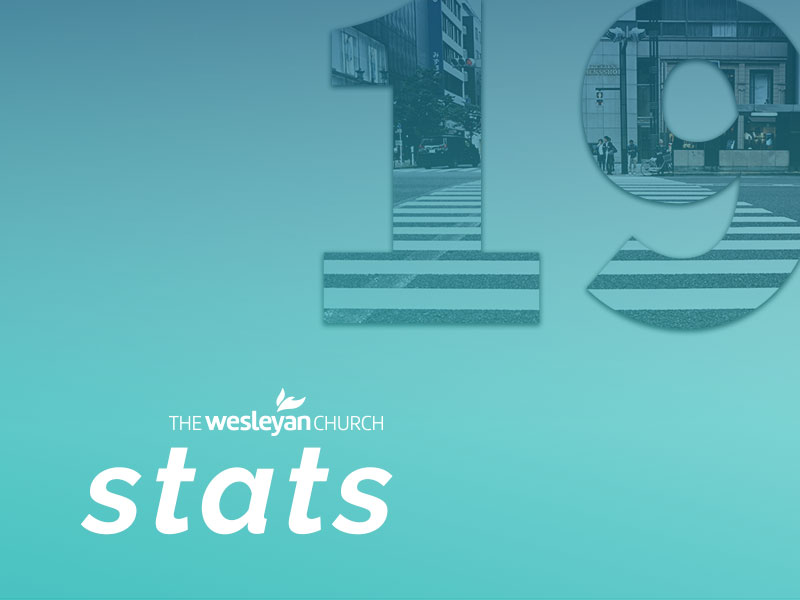 “I thank God for the commitment each of you is placing on discipleship and multiplication."

Statistics for the 2018-2019 Conference Year are official. They reveal that 17.8 percent of Wesleyans are actively involved in making disciples.

For the first time this year, pastors were asked to report on the number of persons who are making disciples. They indicated 22,326 individuals are involved in the disciple-making process, thus furthering The Wesleyan Church’s mission of celebrating every time a disciple makes a disciple and a church multiplies itself until there is a transforming presence in every ZIP code. Surveys were sent to 1,439 pastors and 1,029 pastors responded.

An average of 233,581 persons attended Wesleyan churches on any given Sunday in North America. The average online attendance was 28,852 (a 57 percent increase over last year). Membership totals for this year are 124,837. Churches reported 29,775 conversions and 11,005 baptisms during the year. The number of onsite, membership, conversions and baptisms declined from last year’s totals.

Statistics were reported by 1,513 churches in 26 districts. Since those reports were filed, two district mergers took place, with Wisconsin merging into the Great Lakes District, while Central New York and Western Pennsylvania joined to form the new Penn York District.

Seventy-nine churches reported an average worship attendance of 500 or more. This is the highest number of churches ever to achieve this status in any year.

“While there are many statistics we celebrate, and I thank God for the commitment each of you is placing on discipleship and multiplication, there are still statistics indicating that The Wesleyan Church is not yet a Kingdom Force unleashed to close the Gospel Gap,” said General Superintendent Wayne Schmidt.

“We are eight months away from General Conference 2020 where we will gather as a body, onsite and online, to pray for the unleashing of the Holy Spirit so that we can be sent out to reach those who do not yet know Christ as Savior.

“Continue to pray and to serve wherever God is calling you,” said Schmidt. “Our progress is visible, and our potential is unlimited.”