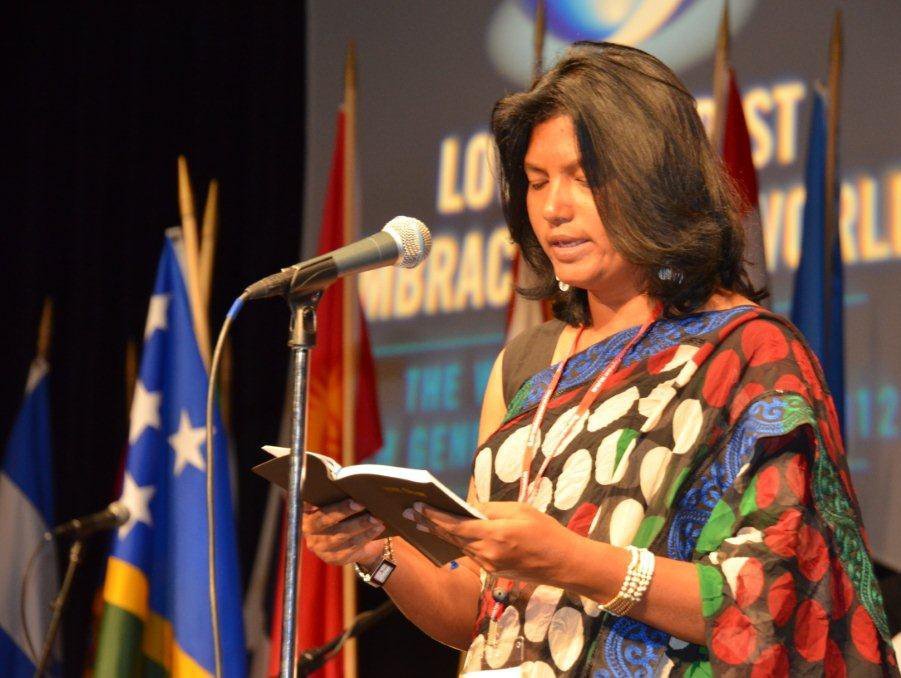 "Loving Christ, Embracing Our World" through global ministries was the theme of the Sunday morning rally at the 12th General Conference of The Wesleyan Church.

“Loving Christ, Embracing Our World” through global ministries was the theme of the Sunday morning rally at the 12th General Conference of The Wesleyan Church. The service began with a parade of flags from the ninety-three countries of the world where The Wesleyan Church has a presence through its missions arm, Global Partners.

Global Partners General Director, Dr. H.C. Wilson, introduced the rally with a warning that the lives of audience members would be touched to possibly give their lives, their children, or their resources to fulfilling the Great Commission in the spirit of the Great Commandment.

Stirring videos of Global Partners’ ministries included that of the second largest Wesleyan church in the world, the Northern Bogota Wesleyan Church in Bogota, Columbia. Its 7,000 active members have impacted its community with outreach, financial resources, and broadcasting.

The Wesleyan national superintendent of Haiti was introduced, and through an interpreter, thanked The Wesleyan Church for over 500,000 lbs. of earthquake relief supplies that have been sent to his country. He said that over 60 rebuilding teams have visited Haiti to help in the restoration, with teams continuing to arrive.

Veteran missionary nurse, Doris Wall, who pioneered The Wesleyan Church mission in Guyana, South America, was given tributes by third generation Wesleyans whose lives had been touched by her sacrificial missionary service. Dr. Lyon presented her with a leather-bound Bible in the Amerindian language that Miss Wall and her team had translated.

The national superintendent of Nepal reported that 18 of 43 Wesleyan churches had been launched through the ministry of The JESUS Film Partnership of Global Partners. Prior to 2001, there were only four churches in all of Nepal, one of which was Wesleyan.

Dr. Wilson introduced the Campaign 300, which would show the historically influential video of the life of Jesus to three million people over the next three years through 30 JESUS film teams. It will also announced that Rev. John Croft will become the new director of the JESUS Film Partnership, succeeding Dr. John Conner who has supervised the showing of the film to 2.5 million people. Since The Wesleyan Church has joined The JESUS Film Partnership, an average of one Wesleyan church per week has begun on mission fields.

More than $19,000 was raised during the morning rally. During the evening rally, Dr. Wilson announced that an anonymous donor gave $20,000 more toward the original goal of $9,000—bringing the total raised to more than $39,000.

Dr. H.C. Wilson, who retires at the rise of the General Conference, gave a final summary address of his years of service. He said at the outset of his report on the “Powerful Lessons Learned” that he would have to check his emotions. His speech included accounts of meeting people who had walked three days to receive a Bible from a Global Partners’ missionary.

Communion was served at the conclusion of the service at stations throughout the Lexington Convention Center auditorium. As a young lady dressed in a wedding gown marched to the platform, Dr. Wilson told of a communion service in the democratic republic of Congo where similarly a young lady came to the platform to remind the church that they are the Bride of Christ. After communion, nationals and missionaries alike read Scripture in various languages.

An invitation was then given for those who wanted to repent of not being good stewards in a world of need. Tendered hearts flooded the front of the auditorium as General Superintendent, Dr. Jo Anne Lyon, led in prayer on behalf of The Wesleyan Church. “Help us to see the world through Your eyes as we have never seen before.”

View the video of the morning session here.