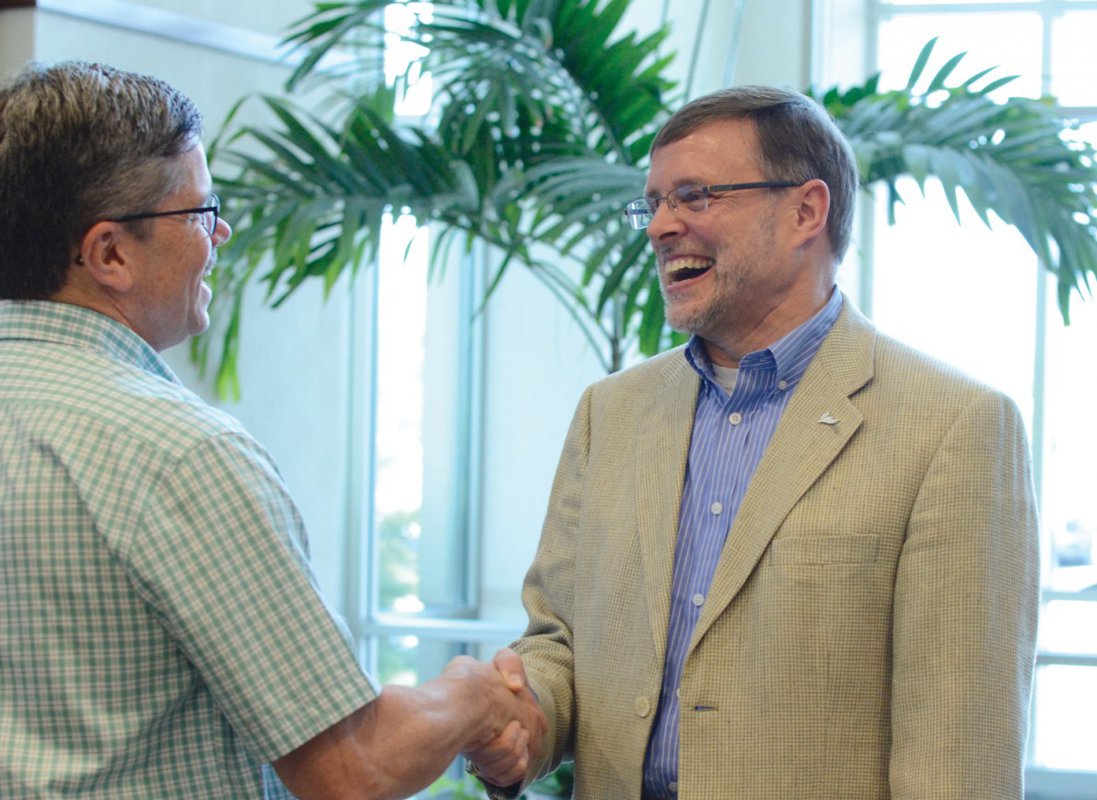 ​A shortage of listeners: comments on post-election America

If political talk surfaces at our tables this Thanksgiving, let's remember the most important thing we can do: listen.

“In a society of super sophisticated communication, we often suffer from a shortage of listeners.” -Erma Bombeck

This is the season in the United States where we set aside time to be thankful, perhaps enjoying a meal with those whom we are closest with, and recounting our blessings. I hope we do that—I certainly plan to do so with my family. However, it is also going to be a time when we are reminded yet again of our divisions. It is not only our country that is divided, it is our states, our counties, our cities, and sometimes even our churches and families. Many of us will be hoping that politics doesn’t come up over the Thanksgiving table.

If politics does come up at that table, please do the most important thing: listen.

The Wesleyan Church I am honored to serve as General Superintendent is active in 96 countries and growing. Half of those ministries were started or are sustained by indigenous leadership or by missionaries from outside North America.

As I view our church in terms of age, ethnicity, and even politics, it is clear we are diverse. Our unity is not in our uniformity. Multi-ethnicity is part of our mission to multiply. We disciple all believers, not only those like ourselves. Our churches find themselves in various zip codes—urban, suburban, and rural. And we know if we are to multiply ourselves, we must lose some of what we have been to become more of what God wants us to be. The common root of our identity is found in Christ, nowhere else.

We believe the mission of the church is so important that we need all-hands-on-deck to accomplish the task. Without empowering the full giftedness of women in leadership and ministry, we cannot achieve the mission. Without removing the barriers facing marginalized groups, we cannot succeed. Those with differing experiences make us better—their perspective helps us combat groupthink and their experience strengthens the whole.

We Wesleyans, people whose “hearts are strangely warmed,” are a strange bunch. We are hard to categorize. This is why you will see some of our leaders break the conservative mold on issues like immigration reform, or who opposed President-elect Donald Trump’s nomination. This is why some of our leaders break the progressive mold on issues like abortion, or who opposed Hillary Clinton’s nomination. If Wesleyans had a political platform we would want it to look like Scripture, not Washington, DC.

We Wesleyans have respected leaders who are outspoken about the fact that they disagree on 95% of today’s political issues. Some of the titans of our tradition have been debating one another about politics since I was born. As a whole, we are neither Republican nor Democrat. We are neither Green nor Libertarian. We are neither partisan nor complacent. If we have sworn eternal allegiance to any party, it is the party of the Lamb, not the donkey or the elephant.

Part of our strangeness is because we are biblically and prayerfully fervent in our relationship with God, but we also have a deep desire to stand up for those who are marginalized. Our very roots are in the work of abolishing slavery and advocating for women to have the right to vote. This makes us an odd duck of sorts, and while our denomination is not large, it is a bigger tent politically than one might imagine. All kinds of political perspectives have found a home here.

As the church steps back to look at the political fray, I believe she can notice that very few are listening to those unlike them. Each has formed his or her own echo chamber of opinion—and this is not only bad for America, it is not how the church should function and we should actively work to change it.

Some say Mr. Trump was elected by people who felt forgotten and not listened to—who finally were heard in their votes. Others say that certain minority groups, be it African-Americans or Hispanics, have had their voices disregarded with political speech that threatens them and leaves them fearful. Various efforts and movements have come to a head bringing attention to those that can’t seem to get our attention. The effort to remind people that black lives matter is one of those examples.

Very quickly these efforts become a debate about who has the right to say what. Whether my injustice is comparable to yours, whether my pain is legitimate or my offense justified. We don’t debate ideas, as much as we debate whether each person has the right to their ideas. Arguments are decided before they begin.

May we be counted among the wise ones who listen to others, instead of the fools who always “think their own way is right” (Proverbs 12:15, NLT).

Pastor Phill Tague of The Ransom Church in Sioux Falls, South Dakota, shared with our board members recently a story from Erma Bombeck of when she was boarding a plane, reading a novel in the line. A woman next to her tried repeatedly to begin a conversation. Bombeck kept her answers short. She just wanted to be left alone.

The woman eventually shared that the body of her deceased husband of 53 years was on the plane. As they went their separate ways, Bombeck was ashamed that she had ignored “another human being screaming to be heard.” Bombeck reflected that all the woman needed was “a listener . . . no advice, wisdom, experience, money, assistance, expertise or even compassion . . . but just a minute or two to listen.”

Hearing this story brought to mind one of my favorite quotes. David Augsburger said, “Being heard is so close to being loved that for the average person, they are almost indistinguishable.” I wonder if you might join me in becoming a movement of people who really listen.

What I Am Hearing

As I have listened in this season I am concerned:

I have heard of a Wesleyan pastor’s grade school daughter, who was adopted from Africa, come home from school terrified as other children told her that because of the election she had to move back to Africa. When the parents followed up at school the only good news the administrators could give was that the child was not alone—they were getting dozens of complaints that children from other countries or whose skin just happened to be brown were being told similar things.

It is not just the cruelty of children that has been inflamed. One of our seminary students at an institution other than our own had “KKK” spray-painted on his dorm wall and it took the institution weeks to paint over it even after many complaints.

I am hearing of people whose Christian leaders, even in our own ranks, do not show the fruit of the Spirit in the way they engage the political sphere. They share concerns that their leaders talk about things one way when they are present; yet talk another way when they are not. They ache questioning, “Is there room for me among Wesleyans?”

What We Are Doing

The answer is yes, but tangible action is needed to prove our trust. We must start talking less and listening more.

Relationship must be prioritized. We need to break bread with one another. We need to ask ourselves hard questions: “Have I had a couple or family over to eat at my home that is different than me? Who has different skin than I wear? Who has a different income level than mine? Who lives in a different part of our city than I live? Who was born in a different country than I was?”

We need to take responsibility. While The Wesleyan Church is historically a part of the holiness movement and not a direct byproduct of the oft-termed “Evangelical Church,” because of the election outcome and because of an assumption about how our people voted, we are questioned.

I do not know how most of the holiness people I serve voted. We don’t do polling of Wesleyans, and we don’t plan to start. But this is a time to remind ourselves of our core convictions, that we, as I said before, are the strange Wesleyans that are biblically and prayerfully fervent in our relationship with God, and have a deep desire to stand up for those who are marginalized. If we lose this, we lose ourselves, and become something different and something unbiblical.

I think a portion of Proverbs teaches us well—if we were to have a humble posture in these days, it would not only serve the world well, it would honor Christ most, and make us a faithful presence, a well-discipled church worthy of multiplying.

Tune your ears to wisdom, and concentrate on understanding. Cry out for insight, and ask for understanding. Search for them as you would for silver; seek them like hidden treasures. Then you will understand what it means to fear the Lord, and you will gain knowledge of God. (Proverbs 2:2-5, NLT)

May we become people who so consistently model the fruit of the Spirit and clearly present an empathetic posture that it is obvious we are safe people ready to listen.

May God grant us ears of wisdom, so we can truly concentrate on understanding our fellow citizens, our neighbors. If we listen, we might just hear God speaking through them as we are faithful to him.