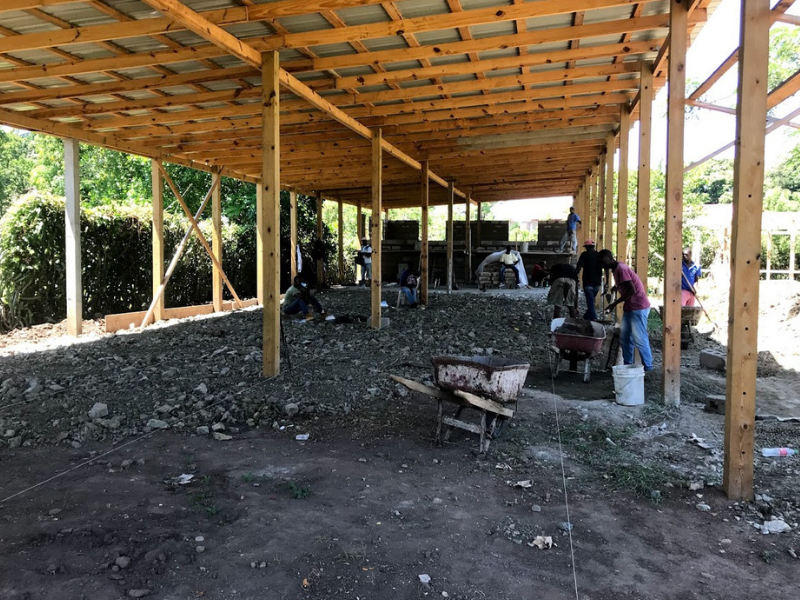 The passion to give to missions is growing in the Indiana South District.

Giving to missions is a growing trend and transforming influence in the Indiana South District.

In 2014, the district was looking for a new project to support with missions-related giving, one that would “be used to draw district churches into a pattern of supporting missions.”

By faith, the district pledged to raise $80,000 to focus on helping rebuild Haiti after the disastrous 2010 earthquake that destroyed the island. Haiti is also a country in which The Wesleyan Church has a strong presence. The goal for the $80,000 included the rebuilding of eight Wesleyan churches damaged by the earthquake, as well as a school building.

In the past five years, the district has surpassed its original goal, raising more than $107,000 for the project.

Rev. Aaron Marshall, missions director for Indiana South and pastor of Blue River Wesleyan Church in Arlington, Indiana, is pleased with how leaders and laypersons have responded with giving.

“We have seen a marked increase in GP (Global Partners) giving in response to our involvement in Haiti missions,” said Marshall. “We’ve encouraged each church to do something, anything. Each one has exceeded its goal. It’s been encouraging to be a part of this transformation.”

As the district has increased its giving, so have the number of mission team trips to Haiti. In October 2016, a district team began building roof-truss kits for eight church roof systems. Several church work teams from Indiana South District have traveled to Haiti since then to paint, build tables and load trucks with wood to be shipped to churches in rural mountain areas.

The district is focusing on a second project phase, a school building in Trou-du-Nord, a town in northern Haiti. The local Wesleyan church continues to grow. The number of schools does not. Haitian leaders and pastors are excited to have a school in the same area as their local church. One pastor has dreamed and prayed for years about having a school nearby.

“Many doubted the possibility of such a school becoming reality,” said Marshall. “When we started the school building and the community saw the roof go up, [the local residents] came to see what was going on.”

As the school was built, Haitians said, “prayers have come true.”

Marshall encourages pastors to take an interest in what the district is doing in Haiti.

“We have had at least one pastor on each work trip that we as a district have supported,” said Marshall. “It really is about the pastors seeing [the work firsthand], tasting the shared meals, working with the local Haitian pastors and sharing with them on Sunday mornings in the local services. That has helped our district.”

Pastor Dennis Holley of Jackson Street Wesleyan Church in Brazil, Indiana, has encouraged his church to begin giving to help support the school.

“Our church is filled with people with big hearts,” said Holley. “They love to see their money and effort build God’s kingdom.”

Dr. Mark Eckart, Indiana South District superintendent, is pleased with how the district he leads has stepped up with its giving to missions.

“This district has a real heart for missions and helping others,” said Eckart. “I want to personally thank each person who has prayed, given and went to help build the school and nine churches in Haiti.”

Marshall believes the work being done in Haiti will continue to have a substantial impact, there and in the Indiana South District.

“The spiritual and educational benefits of these churches and this school in Haiti will literally impact Haiti for generations,” said Marshall.

Tentative plans are in place to dedicate the school building in the spring of 2020.