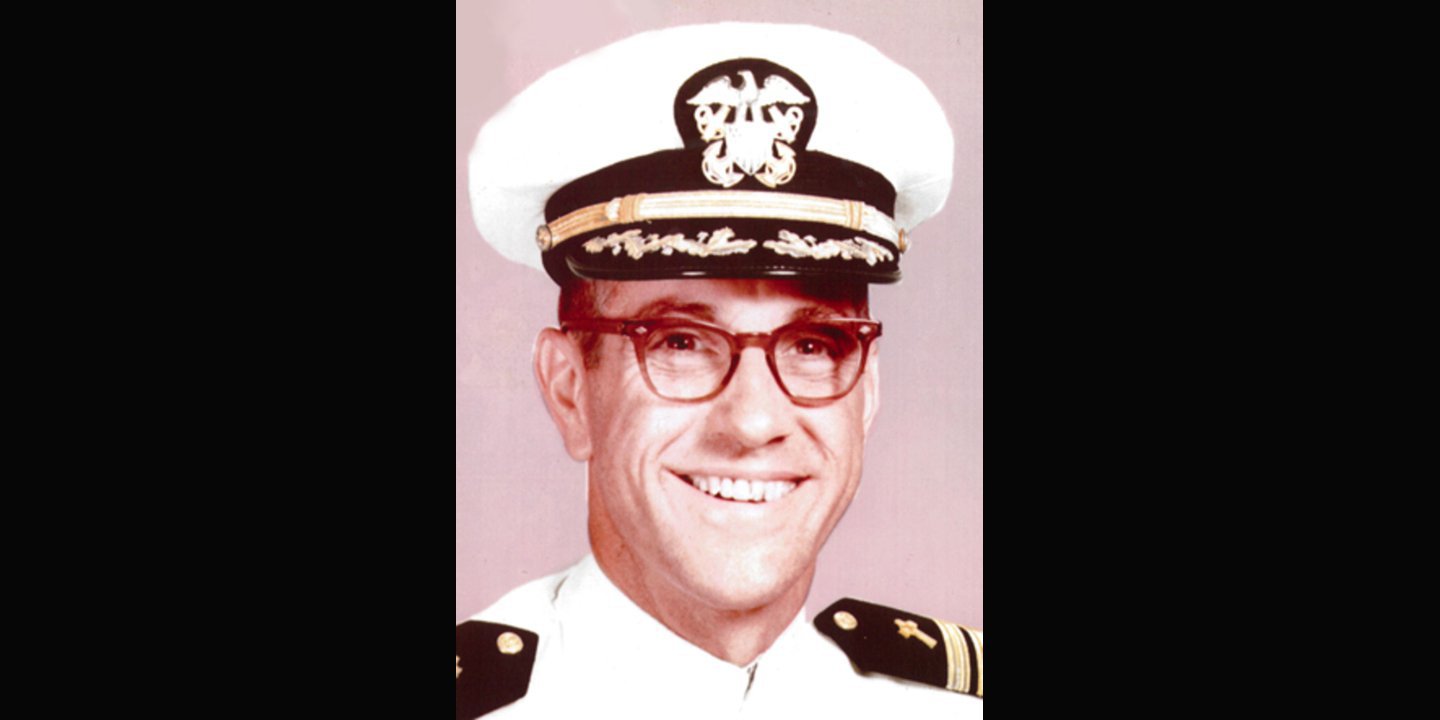 “All I know is how to be a chaplain”

A commissioned chaplain reflects on his service in both the military and at two Wesleyan colleges and universities, saying "All I know is how to be a chaplain."

Richard Bareiss can be forgiven if he doesn’t respond immediately when someone calls him by his first name. For the past 60 years, Bareiss has answered not to the name, Richard, but to the title, Chaplain.

His 20 years in the Navy was matched by his 20 years as a chaplain at the two colleges: nine years at Houghton and 11 years at IWU.

After retiring at IWU, Bariess was instrumental in establishing chaplaincy programs for both the Marion Police Department and the Grant County Sheriff’s Department.

“All I know is how to be a chaplain,” said Bareiss, who now lives with his wife, Elinore, in an apartment at Colonial Oaks, an IWU-owned retirement community near the Marion campus.

Elinore Bareiss shares a story of Richard’s first year at IWU, where their daughter, Cathy, also was a student.

“Cathy was walking across campus one day, a few steps behind her father,” Elinore said. “She called out a couple times, ‘Dad! Dad!’ When he did not respond Cathy tried another approach, ‘Chaplain!’ That caught her father’s attention.”

It came as little surprise in 2012 when Richard and Elinore Bareiss decided to establish the Military Chaplain’s Endowed Scholarship Fund at IWU. One criterion for the renewable scholarship is that recipients must be dependents of Wesleyan military chaplains, either active duty or retired.

In addition to giving $1,000 annually to fund the scholarship, the Bareisses also have included IWU in their will and have established an annuity.

Richard and Elinore Bareiss met as students at Houghton College, a Wesleyan sister institution of IWU in upstate New York. Richard was a native of Massachusetts, and Elinore came from Long Island, New York.

“I went to a Baptist church when I was a child but never heard the gospel,” Richard said. “When I told my high school pastor that I was going to Houghton, he said, “‘Don’t let those Wesleyans mess up your theology.’ ”

“I was endorsed by the Baptist church during my career in the Navy, but denominational titles don’t mean much in the military because you minister to people from all backgrounds,” he said.

Elinore was raised in a conservative Baptist church on Long Island. “They were not too happy when I went to Houghton,” she said.

Richard and Elinore were married in 1952 after they graduated from Houghton, and celebrated their 62nd wedding anniversary in June.

Their current apartment in Marion is their 17th home since they were married. They have four children.

The Bariesses spent their first two years of married life in Massachusetts as Richard completed work on his Master of Divinity degree at the Gordon Seminary. While he was on active duty, Richard earned two additional master’s degrees, one in counseling and the other in student development services.

Elinore Bareiss earned a bachelor’s degree from Houghton with a major in Christian education and minors in Bible and psychology.

For many of his 20 years in the Navy, Richard’s primary residence was aboard a ship while Elinore was at home with their children. At various times, the family lived on the East Coast, the West Coast and in Hawaii.

One of Richard’s more interesting experiences in the Navy was his assignment as the chaplain for an entire squadron of eight destroyers. He explained: “They moved me from ship to ship with something called a high line. They did that by positioning two ships parallel within about 20 yards of each other and then throwing a line from one ship to the other. Then they put me in a chair attached to the line and pulled me from ship to ship.

“One day, I was transferred eight times. It was better than a $2 ride at an amusement park. Today they do it with helicopters,” Bareiss said.

The U.S. Navy also provides chaplains for the Marines and the Coast Guard, and Bareiss was called on at various times to serve both those branches of the military.

“One of my last deployments, for nine months, was as a Marine chaplain in Vietnam,” he said. “That is where the bad guys had my name on an assassination list. I guess they didn’t like me.”

His last tour of duty was with the Coast Guard.

“I never intended that I would spend my entire 40-year career in ministry as a chaplain instead of being a traditional pastor of a church,” said Chaplain Bareiss.

“That is just the way the Lord led us,” Elinore said.