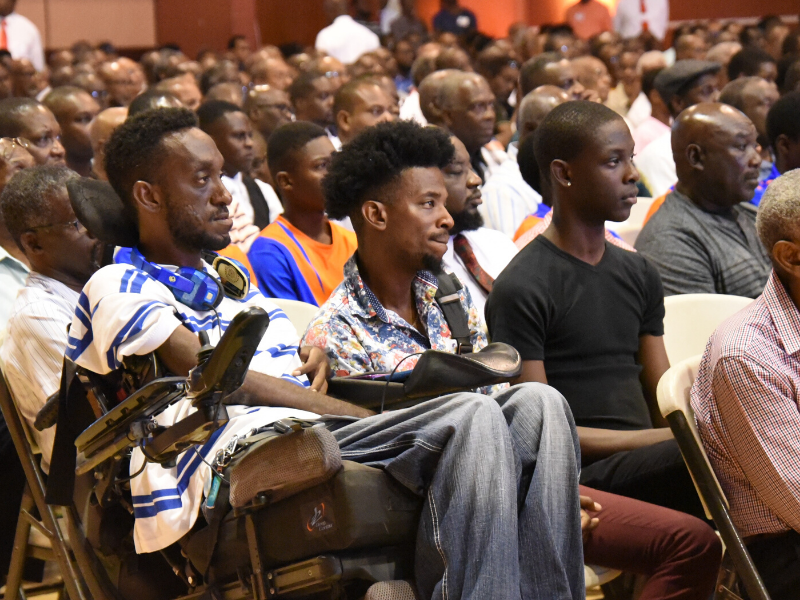 Two thousand men and teenage boys gathered in Barbados to be challenged in their faith and relationship with Jesus.

Two thousand men and teenage boys gathered in Barbados on March 1 at the ManUp: Every Man a Winner event to be challenged in their faith and relationship with Jesus. This event was historic, being the largest number of men ever at a ministry gathering in Barbados. Event participants, held at the Garfield Sobers Sports Complex, arrived expectant for information, inspiration and motivation in how to lead themselves, their spouses and their children. Numerous other men livestreamed the event and watched from home.

The entire program focused on offering men hope. Men had a time to sing, speak into each other’s lives and pray for each other. Fathers brought their sons, and church leaders came with men they’re mentoring and serving. Prominent community leaders attended also. The evening concluded with a special prayer for men and them publicly pledging to be winners in every area of their lives.

For more than 20 years, I have served as visionary and CEO of Family Heartbeat International Network. I had the privilege of leading this event and was encouraged by the group responding positively to how God wants to work in each of their lives. Young and grown men candidly shared about their past and challenging experiences with life issues and how they emerged over time to be great success stories.

One young man spoke of attempting suicide three times and how God miraculously rescued him. He said he suffered severe abuse from significant others as he grew up and had never placed a high value on himself. He tearfully spoke of several marital difficulties and thinking suicide was the only solution. One day he borrowed a gun, put the loaded weapon to his head more than once and pulled the trigger. The gun did not go off. When he pointed it away from his head and squeezed the trigger, it discharged successfully. He angrily took it back to the owner who also successfully fired the gun.

Later, the young man drank a poisonous substance but still lived. The last thing the desperate man tried was cutting his wrist with a razor-sharp knife. But the knife did not slice his flesh. He concluded that God had a unique purpose for his life and turned his life over to Jesus.

“I was surrounded by hundreds of men who were willing to admit their shortcomings, shed their insecurities and rebuild their identity in Christ,” said one attendee. “ManUp, for me, was about broken men meeting a real God to live better lives, to build godly families and communities.”

“After watching, I felt encouraged, affirmed as a man and inspired but also counselled to do better and strive for excellence and desire a deeper intimacy with God,” said a pastor who joined via livestream. “I was further challenged to be unafraid to become who God created me to be and let my light shine for him.”

I shared my faith story of how I grew up in severe poverty. After failing a major examination at age 11, I became very defiant, angry, insecure and violent. At 16, God spoke to me through creation and radically changed my life. Three years later, at age 19, God called me into ministry. I shared with the men how God told me that failing a test does not make an individual a failure. Such a revelation became a defining moment and with diligence and dogged determination, I applied myself and experienced success academically and growth exponentially in social, emotional and spiritual ways.

Follow-up workshops are planned for the year, the goal of which is to formulate a strategy that may help churches, government and non-profit and family-oriented organizations add value to Barbadian men.

Rev. Haynesley Griffith has served Family Heartbeat International Network Inc., for over 20 years and is a licensed marriage and family life consultant. He is an ordained Wesleyan pastor and lives in Barbados.