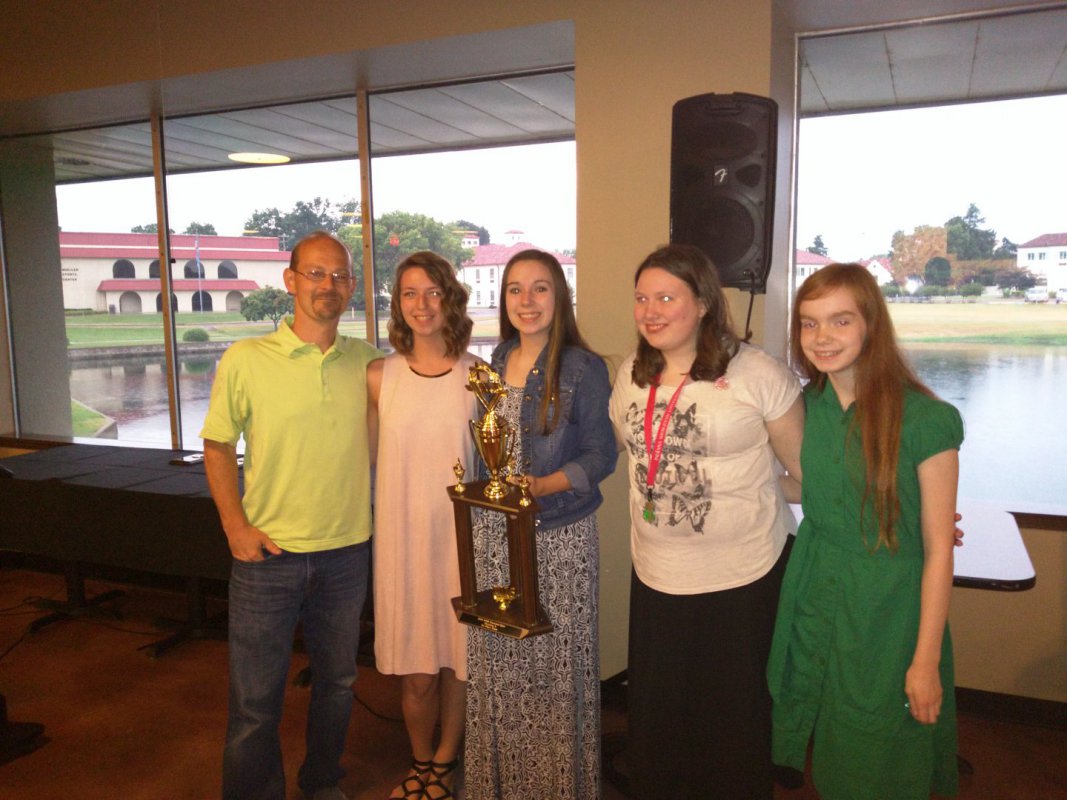 Wesleyan quizzers from across the nation gathered at Oklahoma Wesleyan University for the 2016 National Wesleyan Bible Bowl (WBB) Tournament this summer. Teams from seven Wesleyan churches participated in this year’s tournament from Oklahoma, Virginia, Pennsylvania, Ohio, and Indiana. Over the past year the teens have studied Paul’s letters to the Galatians, Ephesians, Philippians, Colossians, and Philemon in order to prepare for this year’s event.

The competition began with team preliminaries, where each team competes against each other team. Teams were then divided into two divisions based on these results, with the top half of the teams reaching Division A, and the remaining teams in Division B. Teams then competed within their divisions to determine a champion for each level.

In the top Division, one of three teams from Christ Wesleyan Church of Milton, Penn., finished first (pictured), defeating the home team from First Wesleyan of Bartlesville, Okla. These two teams have consistently finished in the top two spots for four of the last five years. Rounding out the rest of the top division were teams from Penn Forest Worship Center of Roanoke, Va., (third place), Cypress Wesleyan Church of Cypress, Ohio, (fourth place), and Weedville Wesleyan Church in Weedville, Penn. (fifth place), all returning teams in the tournament.

Members of the winning team were Megan Crawford, Grace Deitrick, Katherine Reed, and Abby Terwilliger. Each member of the team was awarded a $1,100 scholarship to a Wesleyan college in recognition of their efforts.

In Division B, the two teams from Sweetser Wesleyan in Sweetser, Ind., took the top two spots. Also participating was Union St. Wesleyan Church of Winchester, Ind., as well as the additional teams from the Christ Wesleyan of Milton.

Quizzers were also recognized for their achievements in two separate individual competitions. Scholarships ranged from $3,500 for first place to $250 for tenth place.

The other individual venue was the written competition, which was based on the combined score of 20 five-question quizzes taken the first two days of competition. The top quizzer here was Buk Phillips of Penn Forest, in his final year of Bible quizzing. Joseph Phillips of Bartlesville again tied for second, this time with his sister, Anna. Also receiving scholarships in this area were Grace Deitrick (Milton), Dillon Stewart (Sweetser), Abby Terwilliger (Milton), Hannah Janis (Union St.), Katherine Reed (Milton), Xavier Meridith (Union St.), and Nate Skidmore (Cypress).

Each year WBB also awards two character scholarships to a junior or senior who has been nominated by their coach and also submitted a short essay on what quizzing has meant to them. This year’s recipients were Becca Kleppinger of Weedville and Sam Philllips of Bartlesville.

For the 2016-2017 quizzing year, teams will be studying the Gospel of Luke, participating in local and regional competitions throughout the year as they prepare for the National tournament taking place at Southern Wesleyan University in the summer of 2017.

“WBB is all about three goals–discipleship through the study and memorization of God’s Word, fellowship with like-minded Christ-followers, and competition that brings glory to God,” said Jim Terwilliger, national director of the Wesleyan Bible Bowl. “All three of these were accomplished over the past year through WBB programs in a variety of churches across the denomination. To become a part of this movement, or for more information about Wesleyan Bible Bowl, please contact Jim Terwilliger at jim.terwilliger@mcslions.org.