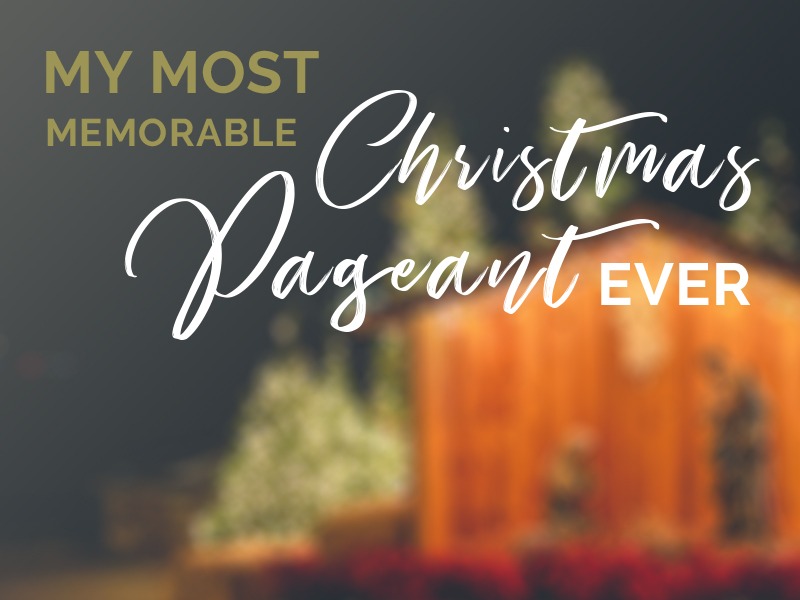 The service had not begun on time and quiet whispers echoed in the quaint sanctuary. Nearly every pew in the sparsely decorated church was full as we anxiously awaited the beginning of the annual children’s Christmas pageant.

It was the Sunday before Christmas, the day that people under three feet tall would reenact the story of Jesus’ birth. The children’s department at the church faithfully drew a crowd each year in this small community. Moms straightened coat hanger halos wrapped in tinsel and fastened too-big angel costumes with safety pins, while dads, positioned with disposable cameras, stood ready to catch the perfect photograph.

The clamoring of little dress shoes against the plywood steps signaled that the children were coming upstairs to enter the sanctuary. We shuffled in our seats to witness the parade of characters slowly walking single-file up the center aisle. The giggles turned into nervous smiles as shepherds in bathrobes took their places. Two wise men with construction paper crowns looked horrified as a third king scrambled to retrieve the present he had dropped on the floor.

Behind a strategically placed curtain stood the narrator, the oldest of the children and the one most qualified to read the story from Luke 2. He cleared his throat and began the narration from the King James Version of the Bible. The characters stood dutifully still as the story was read. Everything was going as planned.

“And Joseph also went up from Galilee, out of the city of Nazareth…” So far, so good.

“…into Judaea, unto the city of David, which is called Bethlehem; (because he was of the house and lineage of David:)…” All is well.

“…to be taxed with Mary his exposed wife, being great with child.”

Stifled laughter rippled across the sanctuary as every adult tried to maintain composure. Even as the chuckles increased, the narrator continued–oblivious to the mistake. Nearly three decades later I still remember that pageant—not only because of the faux pas, but for the little Mary and Joseph who never took their eyes off the baby doll wrapped in blankets, lying in a manger.

Unexpected things will occur this Christmas season, but the one thing we do know–Jesus came. And he still comes to hearts that are open to him.