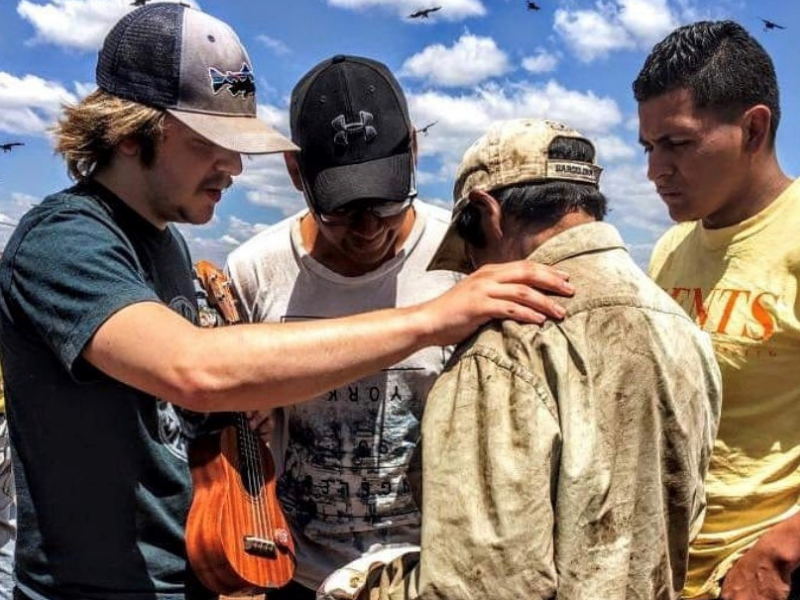 Blood in, blood out

I recently traveled to Honduras on a mission trip with a team of 12 Kingswood University students. Honduras has been in the news lately as a starting point for “caravans” of people trying to escape poverty and violence. While Honduras does have plenty of both, it is also a wonderful and warm culture in which God is very active.

We had various memorable moments in Honduras where God’s presence was real.

The most incredible “God-moment” for me happened in a prison. I have been in this prison twice before but only to play soccer. What I really dreamed of was being able to share the gospel here. This was not a “nice” Canadian prison. It was the kind of prison you see in movies or on TV. Each section of the prison is controlled by a particular gang, as they are extremely active and influential in Honduras.

This visit did not start out promising. We were held up by government red tape and arrived two hours later than we were supposed to. For a while it looked like we might not even get in. However, Romans 8:28 was in full effect, and God worked it out for our good. Because we were late, we were invited to eat lunch with the prisoners. This allowed us to interact casually and gain trust. When a prison official saw us interacting, he was impressed and invited us to play music and give a “motivational speech.” So, we ended up doing a little church service for around 40 young men from a gang that our host church had never worked with before.

Gangs in Central America have a “blood in/blood out rule:” one has to shed someone else’s blood to be initiated into the gang, and the only way one can leave is by his blood being shed. Because Honduras is a Catholic country with a great respect for Jesus, there is one exception to this rule. Some gangs will allow members to leave if they want to become born-again Christians. They recognize that Jesus has his own gang, and they will count his blood shed on the cross as a legitimate way to exit that life. However, the conversion must be real, and the gang is observing to make sure of that. A fake “jailhouse conversion” will not save a previous gang member.

During the visit, a gentleman from our host church, who used to be a gang member, and I shared a message about Jesus. Prisoners responded, especially because of the authenticity and authority of the former gang member. We invited them to place their faith in Jesus, and 14 young men stood up to face fellow inmates, declaring they wanted the new life Jesus offers. It was an awesome thing to witness. The Holy Spirit was thick in the room and you could tell this was a real moment. When we proclaim the gospel boldly, God will act powerfully, and people will respond decisively.

We ended our time playing soccer. Even in that, it felt different than the times I had been there before. God’s presence was on the field. Finally, we said our goodbyes with lots of hugs and handshakes. The sense of God’s presence lingered as we rode back to the mission base in an open truck. Romans 1:16 comes to mind as I recall what God did during our trip to Honduras: “I am not ashamed of the gospel, because it is the power of God for salvation to everyone who believes” (Romans 1:16).

Here is what some Kingswood students said about their experience:

“God used this trip to show me just how much material items don’t bring happiness and that there is so much joy and community in Honduras!” said Austinn Buckley.

“While I was in Honduras, God showed me the unrestrained love that the people had to offer, as well as the freedom they were living in,” said Sydney Windsor. “God taught me about his freedom on a deeper level than I already understood it and showed me that he wants all of us to live in his freedom, without fear, hurt, etc. He also used the trip to heal my heart through his incredible love, which was amazing.”

“God helped me reach a new level of freedom in my worship leading abilities while in Honduras,” said Alexander Abriel. “I can be so caught up in my own thoughts when leading a congregation, (‘Am I doing this for you God? Is this just a show?’) that singing songs in Spanish helped me to realize we are allowed to have fun when praising our God, and though I did not know the full translations of what I was saying, my heart was still aiming to please him.”

“God used this trip in my life to see that the gospel is literally for anyone and everyone!” said Hunter Logue. “I was able to share my testimony with a bunch of prison inmates and later that day after [Professor MacNeil] spoke, 15 gang members gave their lives to Christ!”

All 12 students are in the Praxis program at Kingswood, which focuses on evangelism, compassion ministry and social justice.

Mike MacNeil is program director and associate professor of evangelism and compassion ministry at Kingswood University.

Photo: Hunter Logue prays with man at the dump.