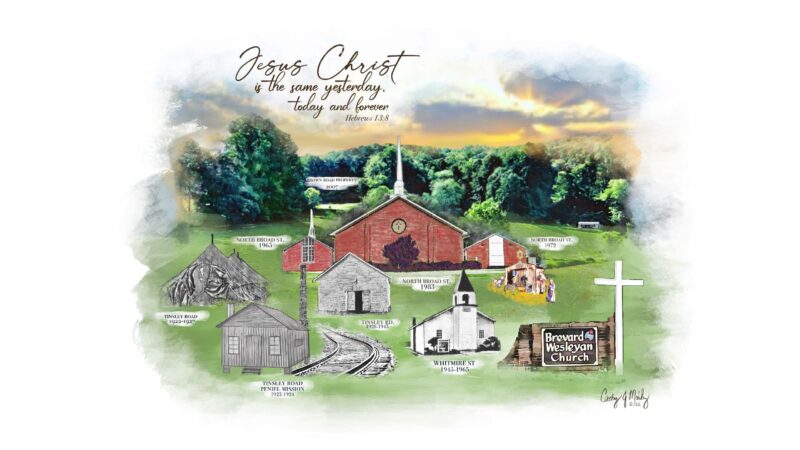 Brevard Wesleyan Church, in Brevard, North Carolina, celebrates 100 years of Proclaiming Christ in the Mountains on October 23, 2022. Those Wonderful 100 Years began when in 1919, a Free Methodist minister from Canada, named G. E. Kellar, settled in Brevard with a burning desire to do something for Christ. One hundred years later, his efforts are still reaping the harvest.

A revival was being held at the Transylvania County Court House, in 1922, by Rev. H.P. Rich, a Wesleyan Methodist minister from Hendersonville, North Carolina. Mr. Kellar, the Canadian, attended the revival and was stirred by the doctrine Rev. Rich was preaching. Connections were made, many questions asked, and a concluding decision finalized. After much prayer, Rev. Rich contacted the President of the North Carolina Conference (as it was called then) about establishing a Wesleyan Methodist Church in Brevard.

The newly established Wesleyan Methodist Church assembled in a variety of places for worship in those early years, from a local back porch, to a little mission house and even a tent, all on Tinsley Road.

Martha Tinsley, the longest living member of Brevard Wesleyan Methodist Church, recalls, “My mother took me to my first church service when I was two weeks old, which was held in a tent.” Rev. Kellar set up that tent to hold revivals and regular church meetings. By 1928, Rev. Kellar began to build the very first church building, mostly using his own funds and his own labor. It was a simple wooden structure complete with a potbellied woodstove for heating. The people were so excited to be owners of their first church building.

As the years progressed, the congregation grew slowly, but eventually outgrew their present location. By 1945, with only 12 members, land was secure on Whitmire Street near the old train depot. A new member, Mr. Clarence Tinsley went throughout Brevard seeking support from local business owners and individuals, for financial help to build their new church building. The building project included their first ever church parsonage next door to the new church building. Business owners and locals were eager to help.

In the days ahead, the once thriving, energized congregation began to fade. With less than a handful of attendees, by 1951 the Wesleyan Methodist Church Conference had decided to close Brevard Wesleyan Church. Among the remaining members was a strong woman of faith, Mrs. Bert Carson. Mrs. Carson was not willing to throw in the towel just yet. With boundless determination, she and her sister bought a bus ticket, traveling to the North Carolina Wesleyan Methodist Conference to address the situation with the Conference President.

Mrs. Carson begged and pleaded with the conference to keep Brevard Wesleyan Methodist Church open, and aggressively requested a pastor. What was not known to those involved, was that God’s conviction was already working on a young family man in a miraculous way. A lineman for a telephone company, working and living near Washington, DC, had been struggling with God’s call on his life to preach the gospel. The young father had finally surrendered to God’s call before THIS opportunity presented itself. And the call came in. Rev. Richard H. Kinsdschi received a request from the North Carolina Conference offering him the pastoral position at Brevard Wesleyan Church. Rev. Kindschi was confident this was God’s call for him. He packed up his growing family and moved to a town and church that was unknown to him but he knew that this was what God wanted him to do.

After arriving in Brevard, Rev. Kinsdschi soon held a revival at the once dying Brevard Wesleyan Methodist Church. Within the months ahead, 60 people were saved, 30 new members joined the church, 25 were baptized and 24 new babies dedicated. The wonderful thing is, the momentum that started during that revival continues until this day!

Once again, the people had outgrown their church on Whitmire Street which was locked in on all sides and the plot of land was quite small. In 1965, several young families stepped out on blind faith, offering to mortgage their homes, if it was needed to support the relocation of the church to North Broad Street where they would build a new church building. Their blind faith was honored. God did not fail those men and women and they did not have to mortgage their homes!

With a land purchase of 19 acres, initiated 18 years ago by Brevard Wesleyan Church, this vision to rebuild, began to take shape recently. Over the past two years, 2020-2022, the Local Board of Administration and the local church staff have spent countless hours in additional prayer meetings, planning meetings, building committee meetings, and in meetings with Building God’s Way & Design Services out of Ogden, Utah. The LBA counted it a privilege to spend tireless hours in consideration of what the Brown Road Project might look like for the entire local church body that would be ministering to our community and beyond from that new space.

As we end our first 100 years with the exciting Brown Road Vision, Brevard Wesleyan Church enters into the next 100 years with great anticipation for what God has in store for us as we follow His lead. Even if the physical plans alter, God is Still in Control.

Thank you, Brevard Wesleyan Church, for the tireless efforts of your 100 years dedicated to Christian service resulting in the changing of many, many lives. The events, baptisms, dedications, the calls to ministry, and the many men and women that did not give up, show that God’s Hand has been on upon Brevard Wesleyan Church! Our Mission is bigger than our mountains that surround our town of Brevard. We are thankful for the many souls won to Christ through that “firm foundation that was laid for our faith, in His excellent Word!” God has entrusted Brevard Wesleyan with 100 years, “Upheld by His Gracious Omnipotent Hand!” May Brevard Wesleyan stay strong, faithful and committed!