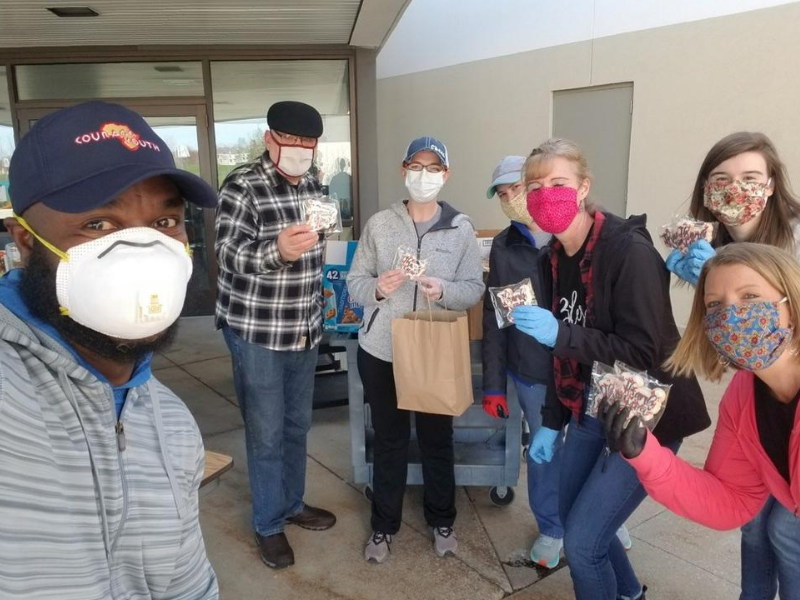 Bridging the Gospel Gap to feed families in Holland

When Central Wesleyan Church wrapped up food distribution, more than 20,000 meals had been provided to community families.

With a near 80-percent free-and-reduced lunch rate at Jefferson Schools in Holland, Michigan, Central Wesleyan Church (CWC) was ready to take action following the close of the school system for COVID-19.

“When we heard that schools would be closing back in March, our first thought instantly went to figuring out how to feed students who rely heavily on the school for lunch,” said CWC Missions Pastor Molly Latchaw.

The church has ministered to Jefferson Elementary School for nearly 25 years through its Hand2Hand food ministry and the Kids Hope USA mentor program, where CWC member Patty Jones, serves as director.

“Kids Hope is a mentoring program that pairs a student who needs a little extra help socially or academically with a caring adult. For one hour a week, about 60 kids would be mentored during their lunch hour,” Jones said. “After school buildings closed and in-person mentoring stopped, our mentors did not stop. They sent letters with stamped addressed envelopes for kids to write back, sent books and coloring pages, and checked in with their families.”

Jones and Latchaw, along with a dedicated team of volunteers, committed time and service to ensuring that the kids of the Holland community were cared for emotionally and physically.

“We gathered as many volunteers as we could and completely emptied our Hand2Hand food closet on the last day of school. We sent home food with every kid who wanted it as well as some of the school staff who were feeling insecure at the same time,” Latchaw said.

The church then set up donation opportunities for non-perishable items, which provided “literally tons” of food for people in the community. With food distribution from the school system occurring twice daily on weekdays, CWC committed itself to providing meals on weekends, specifically for Jefferson Elementary children who lived in nearby apartment complexes.

“We quickly realized the kids were not the only ones struggling,” Latchaw said.

In response, Jones contacted Request Foods, a pre-made meal preparation organization out of Holland. “They donated hundreds of frozen meals, and our church partners in town traded various foods with us,” Latchaw said, noting that the donations allowed the church to open a food distribution from its building.

“Patty has worked on the front lines, coordinating with the schools to identify families in specific-crisis needs that government agencies can’t really help — the people who fall through the cracks,” Latchaw said. “So, on top of food distribution, there has been a lot of individual deliveries to families in acute need — some connected to our church, others not.

“I have been most excited about people serving alongside us who are either unchurched, dechurched or even anti-church. Helping make sure kids have enough to eat is something none of us argue about; we just show up and serve together. And in the midst of that, we have seen hearts soften toward Jesus; some have popped in on services, and some of that hard soil is starting to see seeds take root.”

As unbelievers who served with CWC continue to show signs of opening to Jesus, Jones and Latchaw have marveled at how God has shown himself through this time, meeting even the most minute of needs.

“Two women who were in charge of keeping the food organized and packed could tell stories from every day,” Jones said. “In one instance, they were packing bags and said, ‘If we only had five more jars of pasta sauce, we would have enough complete bags.’ When they went and checked the donation bins, there sat five jars of pasta sauce. God provided in big ways and showed up in simple ways like pasta sauce.

“I am hopeful God is planting seeds in the hearts of those we are serving. My prayer is that since God used and is using our people as his hands and feet in this crisis that, if not through this but maybe another time, they learn to trust the church, see a loving God and ultimately come into a relationship with him,” Jones said.

When CWC wrapped up food distribution, more than 20,000 meals had been provided to community families.

Jones said, “Though we were able to respond in awesome ways, God showed me time and time again that though we are able to be his hands and feet and do the sometimes hard and messy but good work, it’s all for nothing if the glory is not his. Without him and the generosity of his people, this would not have happened. I am so excited to see how he continues to move!”