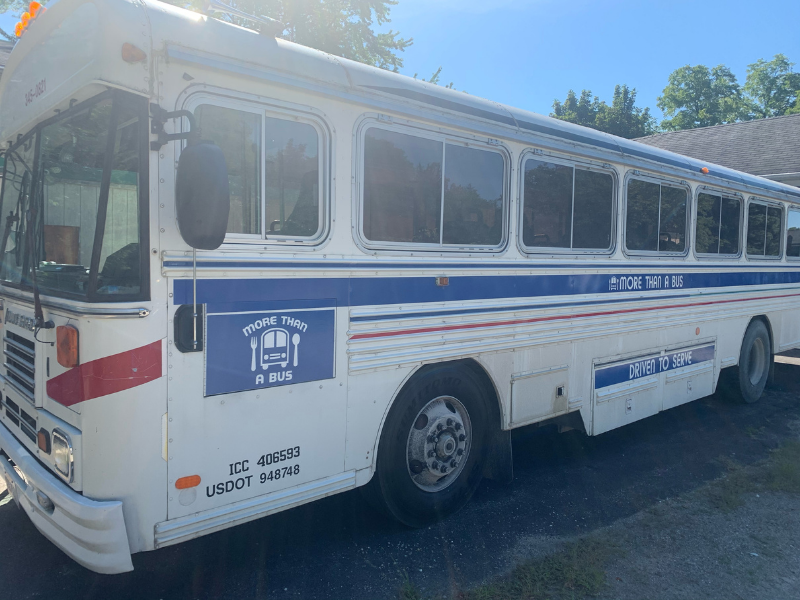 On a mission trip in college, Nate Kingsbury, lead pastor at Stoney Church and founder of More Than a Bus, met Basil, a homeless man in Toronto, Canada. In the short week Kingsbury was with Basil, a hesitant and hungry Basil eventually opened up to Kingsbury, relaying his life story.

Kingsbury wrote on the More Than a Bus website that the interaction with Basil “was more than a sandwich, more than a friendly conversation,” and he realized that ministering to people comes down to the relationship developed with others.

Kingsbury said this moment was pivotal in forging a deep passion within him for the underserved and often forgotten population of society: the homeless.

“It’s sometimes hard to get the church to understand that we just don’t need to give to the poor; we need to actually serve the poor,” Kingsbury said. “I believe that in some ways, we forget the homeless community, and we forget that many of us are only one or two bad decisions or circumstances from being homeless ourselves.”

In response to a growing conviction to serving those impacted by homelessness, Kingsbury launched More Than a Bus in January 2020, which serves as a non-profit organization in Washington, Michigan, and is dedicated to having an “I.M.P.A.C.T.” across the many communities it serves in Macomb County, Michigan.

But More Than a Bus is not the first ministry of its kind.

Kingsbury said that the existence of More Than a Bus ministries and, in fact, the actual bus used by the ministry, came from Metro Relief, a ministry much like More Than a Bus that serves the needs of the homeless in Dallas, Texas, and is run by Kingsbury’s friend, Austin Bonds.

“I got to go down and spend time with Austin and see his ministry in Dallas-Fort Worth that inspired me to do the very ministry that I’m doing here today,” Kingsbury said. “Even though it started when I was 19 with Basil, it actually got re-started in my heart when I visited Austin in Dallas, and I got to see his operation and what he does.”

More Than a Bus’s mission to I.M.P.A.C.T. (immediate, mobilize, partner, authentic relationships, consistency and transform) has served people in more ways than one.

“The purpose of this ministry is to go on the bus and provide people hygiene packs, and when they come on, we pray for them individually,” Kingsbury said.

The ministry sets out to provide food, clothing and personal hygiene supplies, but its dedication is more largely focused on the relationships developed and ministering to people through those relationships.

Jennifer Miller, who serves as executive director of More Than a Bus, said, “When we are serving God through More Than a Bus, we have the ability to not only meet people’s physical needs but also share Christ’s love with them.”

Though More Than a Bus has been in operation officially for less than a year, Kingsbury said that there are volunteers serving with More Than a Bus who had previously been served by More Than a Bus, and, having experienced transformation in their own lives, are able to minister in a powerful way from a place of experience.

“One of the greatest things we have is people who actually serve with us who have been homeless before,” Kingsbury said. “And they’re able to understand completely what these people are going through. So, when they’re serving on the bus, they’re not just serving; they’re putting their whole life into it, because they’ve been there before.”

“As the executive director, I have the privilege of going out to serve on each trip,” said Miller. “In doing that, I not only get to interact with those in need but also watch the volunteers serving. I love this part of it. Every single time we serve, I hear story upon story from the volunteers of how they were blessed in serving that day. I had one volunteer who was struggling and shared how he had prayed to ‘see just Jesus while serving.’ While serving, God orchestrated an event that the volunteer undoubtedly knew could only have been an answer to his prayer. As he said with tears in his eyes, ‘I saw Jesus today.’”

And Kingsbury agrees that the work of God through this ministry should not go unnoticed. He believes that More Than a Bus has forged into so much more than a place to serve but has developed into a kind of church itself.

“Without realizing it, this is a church. Even though it’s a bus that goes to a location, it’s a church that meets, that has a devotion, where people are eating together, they’re praying together, they’re given resources and sharing the Word with one another,” Kingsbury said. “And it might not look like a complete message or worship band or all those things that we identify as being part of a church, but we are. We’re the church of Jesus Christ, and we go where people are to share the message of Christ.”

“More Than a Bus is so much more than a bowl of soup. It is the smiles, the conversations, the prayers that take place while we interact with those in need. They know we do not have to be there but instead want to spend time with them,” Miller said. “When you show Christ’s love, God’s grace and put all judging aside, you can truly connect with those you encounter. We all fall short of perfection, and all sin, so ultimately, we are all the same. Everyone can make a bad decision; the difference is that some bad choices can be life altering.  We are all only a couple bad decisions or circumstances to becoming someone who needs help.”

For more information about More Than a Bus, visit its website.