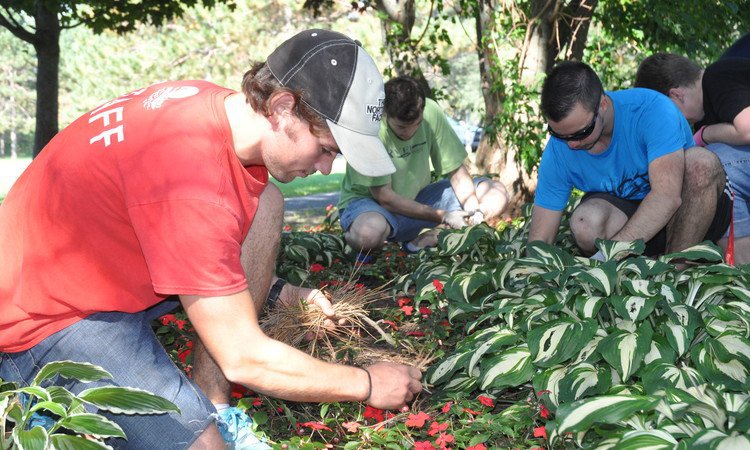 On September 18, Kingswood University began Heritage Month, celebrating its 70th year anniversary as a ministerial training school and its 50th anniversary of opening its doors in in 1965 in Sussex, New Brunswick. In honor of those who sacrificially led in building and growing the school, Kingswood students gave a helping hand to serve the community that has hosted the school for half a century.

Beginning in 1945 as the Holiness Bible Institute in Woodstock, New Brunswick, the school held classes in the church and students roomed in the parsonage. In 1947, the renamed Bethany Bible College moved to Yarmouth, Nova Scotia. Twenty years later, the campus had outgrown its facilities and relocated to Sussex, New Brunswick.

Even though the town of Sussex offered five acres of land on a hilltop overlooking the town, church leaders had to raise $100,000 to build the school. Four men from Grand Manan Island stayed in a 16′ x24′ uninsulated shed over the winter of 1964-65 to build the first two buildings, namely Stairs Hall, a multi-purpose building with offices, classes, and cafeteria, and Ingersoll House, a student dormitory.

“They are not the only ones who sacrificed; others may have given more, but these four symbolize to me the hard work and determined sacrifice that was shown by so many,” said Dr. Stephen Lennox, Kingswood’s newly elected president. “It was the sacrificial service of many, these included, which allowed Kingswood University to begin and to flourish.”

Kingswood also held an open house in the afternoon for alumni and town residents. Dr. Arthur Maxwell, who served the school many years as academic dean (1991-2008) and was interim president (2009-2010), and his wife Sherry, curated Kingswood’s 70-year history with photographs, memorabilia, and a PowerPoint presentation.

On Friday evening, the university hosted an Honor’s Banquet during which alumni from each decade of the school’s ministry were recognized for their service and commitment to the Church. Nominated by their peers, the following alumni received the Alumnus of the Decade awards: Rev. Arnold Stairs (Class of 1948), Rev. Hazen Ricker (Class of 1956), Dr. Laurel D. Buckingham (Class of 1961), Dr. H.C. Wilson (Class of 1972), Rev. Don Ingersoll (Class of 1981), Dr. Eric Hallett (Class of 1990), and Rev. Tanya Nace (Class of 2006). Pastor John Gorveatte (Class of 2014) received the Young Leader’s Award. All are credentialed ministers in The Wesleyan Church.

“We honor our predecessors for their sacrifices,” said Dr. Lennox that evening. “Most of all, we honor God who has sustained us for these past 70 years, and who will continue to provide for Kingswood’s best days, which lie before us.”