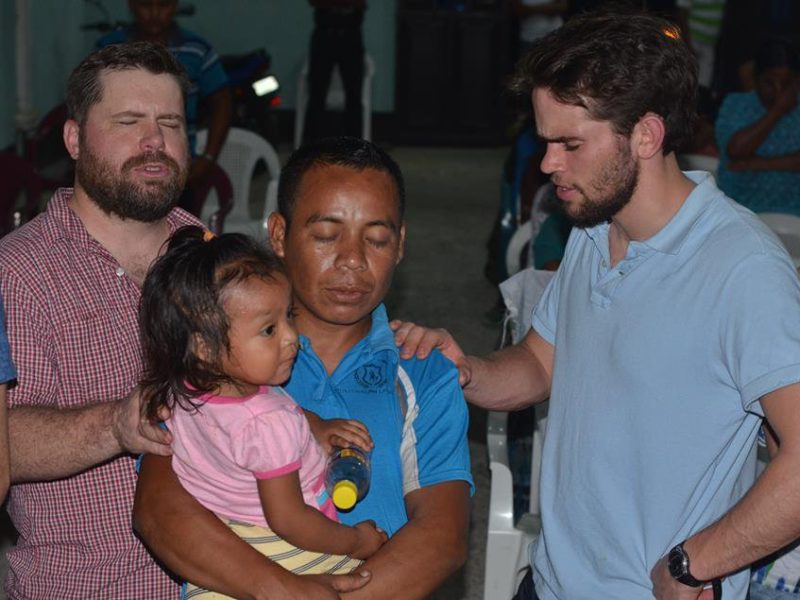 While March Break may denote a time to get away and relax from studies for many, the week off from school gave four teams of Kingswood University students the opportunity to share the gospel and serve others.

One group of second-year students traveled to Guatemala. The team was led by Mike MacNeil, director of the evangelism and Compassion ministry (Praxis) program at Kingswood. The group ministered to children and families in five villages, assisted with feeding programs, helped with construction projects in Rio Dulce and Monte Rico, and conducted church services in four locations.

A powerful moment of the trip came at the end of one of the worship services when MacNeil gave an invitation for the team to pray with anyone who would like prayer. Eight Mayan men and women came forward. They prayed in their Quiche dialect while Kingswood students prayed for them in English.

“All of a sudden we began to notice many of them were crying or even weeping,” said KU student Sydney MacGannon. “Our prayers, which were not understood by each other, were understood by God. In that moment I realized God transcends and pierces through cultures and I recognized how vast and deep the body of Christ is.”

Dr. Bill Peed, director of the global ministry program at KU, traveled with a second group of students to Croatia. The team participated in International Women’s Day celebrations, assisted with a program for teaching English to children, and led an evening of youth fellowship. Students explored the culture and were immersed in the language by going on prayer walks, visiting local landmarks, and interacting with shop owners or ordering food at cafes. One highlight was the opportunity to interact with Kingswood alumni who serve in Europe.

“Croatia is a captivating place, full of people with beautiful, growing relationships,” said KU student Adrienne Sanford. “God has transformed my heart to see more of His character and how precious every single person is to Him. I want to exalt him by broadening my worldview, embracing the language, people, and attitude of other cultures, and mirroring Jesus’ example of love and servanthood through intentional investment in the lives of others.”

“Normally, many youth groups do not worship with live music, so the impact we had was incredible,” said Ben DeRoche with KU Encounter. “God was present, and it was awesome to see students looking into how they can serve in ministry as they signed up for Ecclesia, Kingswood’s short-term summer ministry experience for high school teens.”

“There are many stories to tell of great connections we were able to make, awesome moments of worship, and incredible God moments especially through his revelation in our conversations,” said Grace Young with KU Alive. “But I think one of the greatest moments was being able to see eight high school students accept Christ for the first time at the Hamburg Wesleyan Church youth group in Buffalo, New York.”

“It was really cool to hear from the youth pastor, Justin Callicutt (a 2014 Kingswood graduate), as he shared how he had been anticipating for a long time that these students would come to know Christ,” said Young. “He talked about how he had been praying for many of the students to make that step. It was so awesome to be able to see God move through the obedient prayers of His people.”

Giving up their March Break to have God work in and through them was not at all a sacrifice for these KU students; it was a blessing.