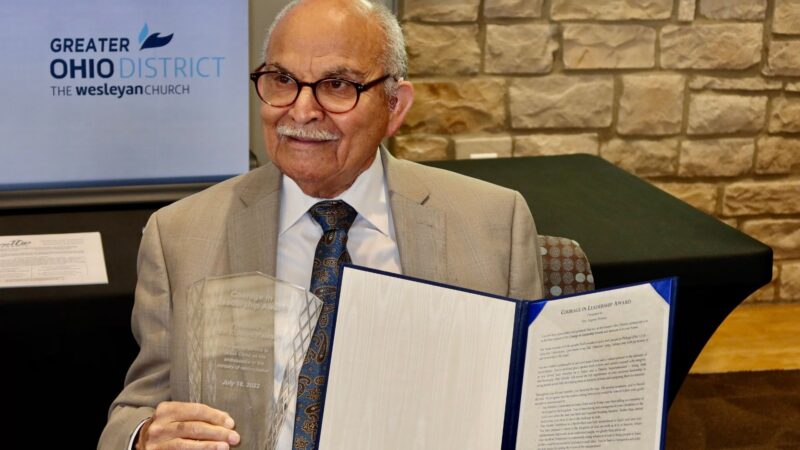 The Greater Ohio District named its “Courage in Leadership Award” the “Eugene Ramsey Award,” in honor of Rev. Eugene Ramsey — a former district superintendent of the South Ohio District whose life and work exemplifies the power of restorative justice.

“I sat in awe as I listened to the courage and faith of Eugene and Phyllis Ramsey through years of injustice,” reflected Dr. Jo Anne Lyon, General Superintendent Emeritus. “Tears filled my eyes as it came to me: today we are seeing the words of the prophet Amos lived out in our midst, ‘… let justice roll on like a river, righteousness like a never-failing stream!’”

While the award was named after Rev. Ramsey, his story points to a larger opportunity for our own congregations to practice justice in our neighborhoods.

In 1956, Rev. Ramsey was elected conference president (district superintendent) of the South Ohio District — which included historically-black churches both within and outside Ohio, including congregations in Indiana, Kentucky, Tennessee and West Virginia. After his tenure as conference president began, Rev. Ramsey noticed that the South Ohio District was in Marion College’s (now Indiana Wesleyan University, IWU) geographical region but was the only district not represented on the college board.

“I knew something wasn’t right about that,” reflected Rev. Ramsey. “So I brought it up at the General Conference. President McConn talked with me and agreed that our district should be represented, and it was quickly rectified.”

Rev. Ramsey’s appointment to the board was historic — both for the denomination and for IWU as he was the first black member of the Marion College Board of Trustees.

For Rev. Ramsey, a willingness to confront injustice with truth is a central part of a call to ministry. “Certainly you’d have to say that ministers set an example for the people in their community,” he said. “This was a part of that — of helping our denomination start and keep interracial churches instead of keeping a divide.”

As years went on, Rev. Ramsey advocated for historically black churches to be part of the districts in which they were located, rather than having their own district. More recently, he has encouraged young pastors who are planting intentionally multi-ethnic churches and is inspired as he sees the denomination’s work in restorative justice.

“I’ve appreciated what our district and some others are doing,” said Rev. Ramsey. “We’re seeing churches start up that are multi-ethnic; where previously we might see white churches or black churches or Spanish-speaking congregations, we’re now seeing churches with various ethnicities start that way from the beginning.”

As The Wesleyan Church continues to follow the Christian call to justice, Rev. Ramsey’s life offers an instructive picture: he’s pastored churches since his junior year at Marion College — when he would catch a ride to the state line between Ohio and Indiana, then hitchhike to the town his church was in — and has since served the church in various positions, including seasons in bivocational, denominational and congregational ministry.

In every position, Rev. Ramsey has occupied, he has offered a vision of wholeness in Christ that’s inclusive of everyone in the community: from the influential to the marginalized.

The Greater Ohio District began this award as an opportunity to call The Wesleyan Church to repentance and recommitment around our historic practice of seeking justice.

“This is an opportunity for us as The Wesleyan Church to celebrate Rev. Ramsey’s history, to honor that, and to somehow connect with that in a way that hopefully lets us recognize there should be some lament and repentance and reparation of the breach that has so long existed in racial divides,” reflected Rev. Richard Meeks, assistant district superintendent of the Greater Ohio District.

“When I became district superintendent of the Greater Ohio District, I had the opportunity to have many conversations with Eugene Ramsey. I knew he was a man of faith and he prayed for me. I always had a great respect for his spirit, and humbleness. And yet, I did not have any idea who he really was,” shared Rev. Les Crossfield, district superintendent of the Greater Ohio District. “When I learned of his courageous leadership and what he endured I had tears in my eyes. I am so thankful that we had an opportunity to give him this award that he rightfully deserves. And it will be our honor to honor him by giving this award to pastors and leaders that lead with courage and love just like Eugene Ramsey did.”

With this history of justice-oriented ministry in mind, The Eugene Ramsey Award will serve as a tangible “prompt” of the opportunity Wesleyans have to live courageously into our history; the award will serve as a tangible reminder of our churches’ opportunity to lead the way in rectifying the systems, structures and relationships in our communities that go against the grain of the justice of God.