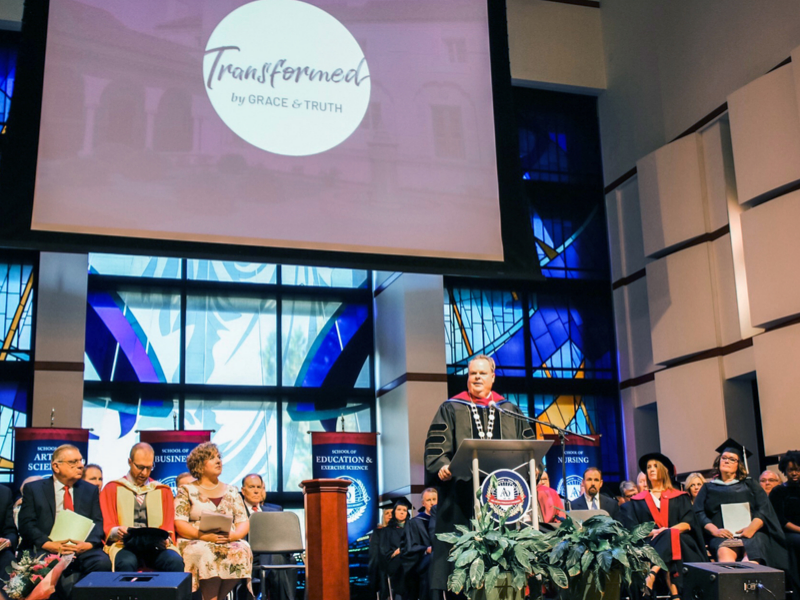 “OKWU’s message must be counter-cultural, not anti-cultural, so that we might win some for the cause of the Good News: that Jesus saves.”

Dr. Jim Dunn has been inaugurated as the sixth president of Oklahoma Wesleyan University (OKWU) since the university’s founding.

Equally full of humor and gravity, the ceremony, held October 11, was a poignant celebration of new beginnings for the university. The theme of the program, “Transformed by Grace and Truth,” served as a kind of rallying cry for the inauguration and will continue to be a thematic roadmap as this new era of university leadership takes effect.

“OKWU’s message must be counter-cultural, not anti-cultural,” Dunn said, “so that we might win some for the cause of the Good News: that Jesus saves.”

The inauguration, which took place in OKWU’s Lyon Chapel and Fine Arts Center, marks the official beginning of a tenure that began this summer, when Dr. Dunn and first lady, Wendy Agner Dunn, arrived on campus to give leadership.

Dunn is no stranger to OKWU, a university that he’s already been deeply involved in throughout his life. Having attended OKWU — then Bartlesville Wesleyan College — as an undergraduate student, Dunn has served The Wesleyan Church in various capacities: local pastor, teacher at Indiana Wesleyan University, general director of Spiritual Formation, executive director of Church Multiplication and Discipleship and, most recently, as the vice president of Church Relations at the Wesleyan Investment Foundation. Throughout the different roles he has filled, Dunn believes he was always being prepared for this task: to lead OKWU into the future.

Dr. Steve Babby, a member of the OKWU Board of Trustees, delivered the inaugural address and outlined some of the challenges facing the university and Christian higher education in general.

“It’s difficult for a university to survive today,” Babby said. “How can OKWU remain relevant, now and in the future?”

Dr. Dalene Fisher, assistant provost and dean of Arts and Sciences at OKWU, opened the inauguration ceremony by dedicating the ringing of the OKWU bell to the memory of Sam Shannon, son of Dr. Mark Shannon, assistant professor of management and leadership, who passed away October 11, 2005. Shannon then took to the stage to emotionally ring what will now be known as Sam’s Bell.

A number of visiting dignitaries, from political and academic worlds, attended the event, including State Senator Julie Daniels and Congressman Kevin Hern. Dale Copeland, mayor of the city of Bartlesville, was also in attendance and anticipates with excitement the years to come at OKWU.

“OKWU has long been a vital part of our community,” said Copeland. “The faculty and student body serve as outstanding local citizens. Their engagement and leadership have always been a benefit over the decades. I look forward to a bright future with Dr. Dunn at the helm of this fine institution. These are exciting times in Bartlesville.”

“We celebrate the promise that new leadership brings to a university that has grown and enjoyed much success over the past 15 years,” said Senator Daniels. “OKWU is a blessing to Bartlesville and plays a large role in making us the unique little city that we are.”

The Wesleyan Church (TWC) was represented by dignitaries from Houghton College, Wesley Seminary at Indiana Wesleyan University, Southern Wesleyan University and Kingswood University. Dr. Wayne Schmidt, General Superintendent of The Wesleyan Church, was also involved in the program, presenting the presidential medallion to Dunn along with Roger Metcalf, chair of OKWU’s Board of Trustees, and Dr. Mark Weeter, university provost.

“You are God’s man for this time,” said Schmidt to Dunn. “I can’t think of a more fitting president for such a time as this in the life of Oklahoma Wesleyan and in the life of The Wesleyan Church.”

“Jim Dunn is a wonderful servant leader who is passionate about discipleship and the way Christ-centered higher education can extend the ministry of the local church,” said Dr. Kevin Newman, president of Southern Nazarene University. “It will be exciting to watch his impact at OKWU.”

Dr. Pat Taylor, interim president of Oklahoma Baptist University, reflected on what the concept of an inauguration can mean to a university.

“Inauguration is a time of celebrating a new beginning,” he said. “It is a time the new president can formally outline goals and objectives for the university for the next several years. Basically, inauguration day is a celebration of the historical values and heritage of the university.”

Dunn’s address acknowledged this history, noting the strong spiritual foundation that OKWU has stood on since its beginning over 100 years ago. He also placed a high emphasis on the OKWU community joining together as prayer partners. Dunn is seeking 1,000 prayer partners to join with him in praying for two things – first, that God would provide exactly what the university needs, and secondly, that God would supernaturally work in and through the mission of OKWU.

Dr. Josh McNall, a professor in the School of Ministry and Christian Thought at OKWU, perhaps summed up this need for prayer partners best in his invocation, by quoting the words of Psalm 127: “Unless the Lord builds the house, those who build it labor in vain.”