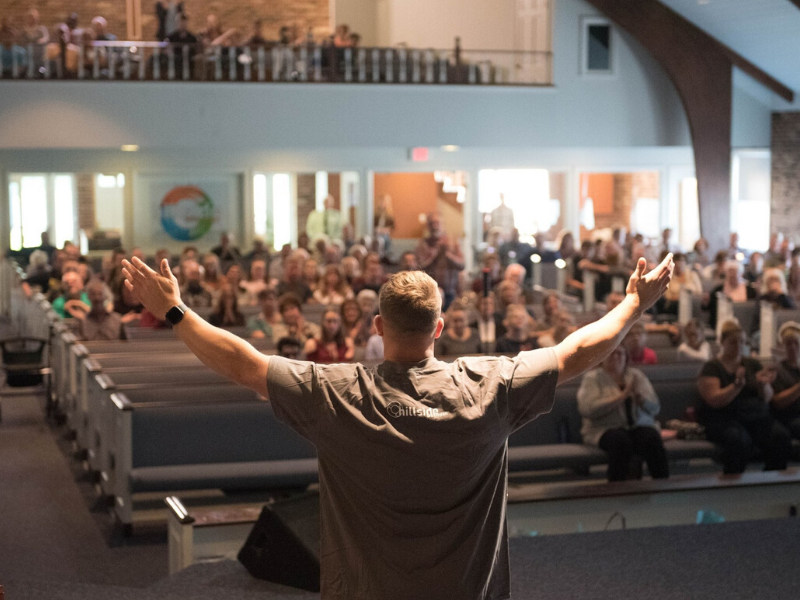 For years, Chris made poor choices — even being sent to prison. Now he's experiencing freedom after placing his faith in Jesus.

A baptism service held at Hillside Wesleyan Church (HWC) in Clyde, Michigan, provided the opportunity for stories of life transformation to be told.

Moretz’ story is redemptive, marred by years of bad choices before he placed his faith in Jesus. Moretz describes his childhood as “pretty good” with some “ups and downs.” As a young adult, he was “blessed with two beautiful children, a good job and a nice home. I loved my garden, cutting my lawn and watching my sprinkler system run. I should have been thanking the Lord for allowing that to be possible. Instead I thought it was all me.”

But while in his 30s, Moretz became a drug addict, drug dealer and sex addict.

“I ruined marriages, broke up families, damaged my community by putting drugs on the street,” said Moretz. “What hurts me the most is I embarrassed my family name and let my children down.”

Moretz was sent to prison. While there, he began a relationship with Jesus. He was released from prison in 2018 and has been attending church since.

“I believe God wanted to get my attention so bad that if he couldn’t get my attention on the mountain top, he would meet me down in the valley,” said Moretz. “I finally surrendered and accepted his request.”

Michelle Mills, Amelia’s mother, was brought up in the church with a “solid foundation” of Jesus in her life, but she did not have a personal relationship with him.

“I graduated from high school, got into the secular workforce and spiraled in sin,” said Michelle. “I made a mess of my life.”

She eventually married and began attending Hillside in 2009, albeit sporadically, with Amelia. Michelle has endured many failures, the loss of family members and fought addiction. Life has not been easy, but she now has new hope and new strength.

Lutrell was raised in a Christian home and in church. She considered herself a Christian, but as a teen, began making choices that did not reflect that lifestyle. As a young woman in her 20s, she was a single mom with two kids. Lutrell met a pastor who was mentoring her daughter’s father. She and the pastor began to discuss the gospel.

She has reconciled with her daughter’s father and the couple married in February 2018. Though life still presents its struggles, Lutrell said, “We try to keep the Lord at the center of our marriage, family and lives.”

Rev. Bill Kinnan, pastor at Hillside, is ecstatic about what God is doing at the church, as is the congregation.

“That Sunday [October 6] was a highlight for our church, experiencing the power of God,” said Kinnan. “Ours is not usually a shouting church, but we were that Sunday.”