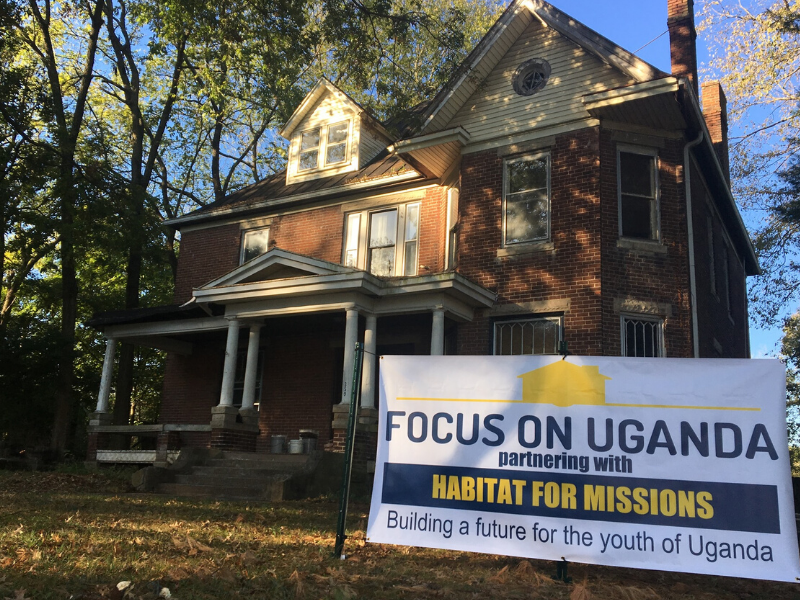 Two Wesleyan ministers are working to raise money for missionaries, church plants and mission projects through the unique method of flipping houses. Rev. Bill Foster, a Global Partners missionary for over 30 years, founded Habitat for Missions (HFM) in 2005 as a teaching tool for global studies majors at Indiana Wesleyan University. The goal was to “help potential missionaries embrace the reality that funding for their future service was their responsibility. Helping to flip a property to generate money for that future service symbolized that fact and, in the process, they would also acquire some building skill training which might come in handy on the mission field.”

Foster and his wife, Daphne, were serving as missionaries in residence at IWU at the time, where they mentored and prepared students for a lifetime of service (ministry or vocational) as well as inspired students to develop hearts for the world. Early on, HFM purchased a house, had students renovate it, sold it and then put the profit in missionary starter accounts for the students. Since 2005, HFM has completed 50 projects in partnership with churches and organizations. Over $700,000 has been raised for missions and church plants.

Foster’s passion for this ministry was formed out of his and Daphne’s experience as young missionaries in 1973. That year, the couple sensed God calling them to join Wesleyan World Missions as missionaries in Australia. But there was no budget for their support. They had to decide if they would still go “down under.”

The couple said, “yes” to Australia, trusting that God would meet their financial needs. God did. Foster said, “From 1973–2004, we planted four local Wesleyan congregations and taught at Kingsley Bible College.”

When asked what he loves most about serving with HFM, Foster said, “I love generating hundreds of thousands of dollars to financially support another generation of missionaries so they can serve where God has called them to serve. Funding is as challenging today as it was in 1973. HFM provides another revenue stream which God is using to support his workers around the world.”

In 2017, Foster saw the need to expand bringing on more staff to assist in the house flipping and fundraising endeavors. Rev. Wayne Richards joined HFM as director of operations. Richards had served as a Wesleyan pastor for 15 years and in director roles at The Wesleyan Church Headquarters for 20 years.

In 2019, HFM has been involved in a record seven projects (in Florida, Indiana, Kentucky and Michigan), including the move of a large house to a new location in South Bend, Indiana. Projects were also completed this year in St. Petersburg and Brooksville, Florida, which contributed over $56,000 in financial support of Global Partners missionaries couples serving in Europe. (Additional states in which HFM has completed projects since 2005: Illinois, Iowa, New York and South Carolina.)

Richards is truly grateful that he’s part of an organization that is having a Kingdom-Force impact in such a unique way.

“I love working with an organization like HFM that gives churches and organizations a chance to do something that they might not have the opportunity to do on their own,” said Richards. “I love how our house projects bring churches together around a common theme and then how that project unleashes new resources into kingdom ministry.”

While the HFM projects are important in producing funds, the ministry is having a wider Kingdom-Force impact than meets the eye.

“HFM is mobilizing hundreds of volunteers annually to donate time and talent for worldwide ministries,” said Foster. “We redeem neighborhoods by restoring distressed properties. We provide quality, affordable housing. All this while generating financial support for Christian mission.

“In the U.S., we’ve seen several volunteers come to faith in Christ while working on an HFM project. Overseas, we’ve supported missionary medical personnel, educators, community workers and pastors on every continent except Antarctica. Right now, we are generating funds to build a technical school in Uganda and support a ministry in India which is rescuing children from industrial and sex slavery.”

Both Foster and Richards look forward to watching what God does in and through the ministry in 2020.

Current projects under renovation should produce a record $300,000 in new resources for 2020. The project beneficiaries include a campus in India for girls rescued from sex trafficking, a vocational school in Uganda and vocational training for at-risk teenagers in Indiana. New house project partnerships in 2020 include Shepherd Community Ministries in Indianapolis, Indiana, and Men in Mission with One Mission Society in Greenwood, Indiana. By the end of 2020, HFM will have generated over $1,000,000 for Christian mission.

Learn more about Habitat for Missions.