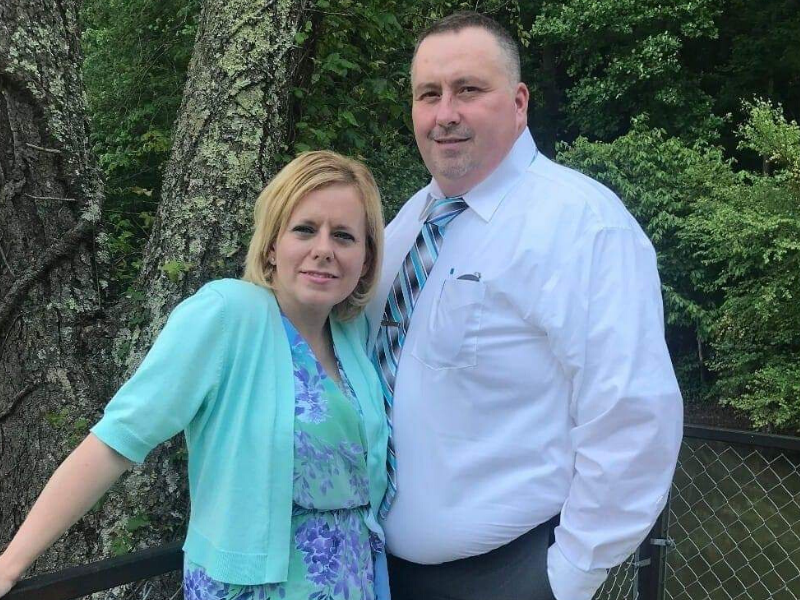 A Wesleyan pastor is being used by God to make lives new in Mullens, West Virginia, as he shares his story of freedom from drug addiction.

As the detective put handcuffs on me and loaded me into his patrol car, he said, “Darrell, you are a piece of ____!” His words hit me hard as I was jailed with more than 20 felony charges: trafficking opiates, forgery, larceny by employee and obtaining property by false pretense.

That dark time in my life included drug abuse, suicide attempts and breaking the law. Before then, I was considered one of the best law enforcement officers in our area of North Carolina, working as a detective predominantly assigned to drug investigations. Over the course of my career, I made some substantial county drug busts and even received an award for deputy of the year.

Then things began to spin out of control. I turned to drugs and alcohol to cope with health and personal issues. One thing led to another. I used my position at the sheriff’s office to get drugs. First, I popped pills. Then I started snorting the drugs. I lied, cheated and stole evidence as my addiction worsened.

I became a full blown “junkie,” shooting up oxycontin and heroin.

At the height of my drug abuse, I overdosed three times and nearly died. I didn’t care. I got caught in my lies and deception and was fired from the sheriff’s office. I got a job at a local gas station, where I was later arrested.

I was taken to the local magistrate’s office, and bond was set at one million dollars. The reality of all I had done began to sink in. I pled guilty and was sentenced to three years and 10 months in the North Carolina Department of Corrections.

My future looked bleak. But that’s when God started to work.

Approximately three months into my sentence, I sat, cold, in my prison cell. A high school memory came to mind. I remembered going to church with a girlfriend and recalled all the testimonies and preaching I heard at Dan River Wesleyan Church in Eden, North Carolina. While I was remembering, the weight of my sin crumbled down on me. That day in my prison cell, I fell to my knees and cried out to God.

The Holy Spirit responded. Salvation had come — in a prison cell, of all places. While I still had to finish my time, God was now with me. He began to do something unexplainable in my heart. I saw the error of my ways. Instead of turning to drugs, I should have turned to God. I started to hunger for God’s Word, and a chaplain brought me a Bible. My request for a radio was approved, and I began listening to every sermon and gospel song I could find.

I knew God was calling me into ministry. I struggled, then embraced the call. I remember praying and saying, “Lord, I’m yours! I know I don’t deserve anything, but let your will be done. Give me back the things in my life that you want me to have, not what I want to have.”

Time in prison passed slowly. My wife filed for divorce, which was finalized while I was still in prison. I became angry. I felt so alone. I thought my life was supposed to get better after placing my faith in Jesus. I questioned God and almost gave up again, but God reminded me that he was in control and that he loved me.

Five months before my release date, I was included in the mail call. “This is probably just some bad news,” I thought. When I got the mail, I was shocked. It was a letter from the girl I had dated in high school — the one who had taken me to church. She heard I was in prison and wanted to visit me. We reconnected and upon my release, started dating and then married. God gave me the gift of Sara, my wonderful and beautiful wife.

I started attending Sara’s church, Dan River Wesleyan, the one I visited as a teen. I began to feel God’s calling more strongly. I started teaching the young adult Sunday school class. I enrolled as a ministerial student within The Wesleyan Church, at the encouragement of Rev. Cameron Dockery. He even shared the pulpit with me. I was happy to preach, but God put the desire in me for more. I became a staff pastor at a local, nondenominational ministry called LOT:2540. God showed me there what I was to do in ministry.

LOT:2540 was and still is a “mission” that serves “the least of these” in its community through its soup kitchen and food pantry, funded by selling salvaged material. LOT:2540 expresses love in action, while telling people about Jesus.

Sara and I sensed God calling us to the West Virginia mountains. We were eventually invited to Mullens Wesleyan Church in Mullens. Shenandoah District was closing the church there and District Superintendent Rev. Greg Reynolds wanted us to attend the church’s final service with him.

Something happened that day. We saw this beautiful church closing, the need in the community,

and we knew: God wanted us to minister in Mullens. Sara and I prayed and felt the calling to go to Mullins. By faith, began the process of laying groundwork for ministry.

We started having church services at the Mullens Opportunity Center in October 2014. Our first church service was small, with only 12 people attending, but Made New Church had officially been reborn. God blessed Sara with a new job, as I focused on building the new ministry.

We knew God wanted us to be a missional church that reached out to the community. One day, as we drove through Mullens, Sara saw a thrift store on a corner lot and wished it were ours because literally everyone in town would drive by it. I remember saying, “Yes, that would be nice, but it’s already taken.” We prayed for the right location.

Two weeks later, that same store had a “for rent” sign in the window. This was where God wanted us. The owner only charged us $300 a month rent, confirming, again, that God was definitely at work.

Made New Thrift Store opened. Our goal was to be a blessing in a community where many families live at or below poverty level. The area unemployment rate is well above the national average. One of four school kids go home hungry. We also started a soup kitchen and food pantry with store sales proceeds.

Soon, we were giving out 10–15 food boxes weekly and feeding anyone who entered. We moved our church to the store front, and when we began to run out of room, we rented the adjacent store front.

About a year passed, and the ministry kept growing, and God kept blessing us. We weren’t necessarily growing in numbers, but people were supporting the ministry with clothes, furniture and other donations, as well as food for our pantry. The numbers of families we helped kept increasing.

We connected with and eventually began running a community youth center called The Way. The facility included a 10,000-square-foot building with a full court gym, concession stand, stage, pool, ping pong and air hockey tables and apartments that we use to house out-of-town missionaries who help with community mission projects. We moved our ministries there.

Now we were not only doing the store, food pantry, soup kitchen and church, we were also ministering to more than 100 kids weekly.

Sara and I knew God was calling us to Mullens, and we were obedient. We arrived without a special skillset other than our willingness to serve God and others.

There is a great need for the hope of Christ in southern West Virginia. The drug epidemic is overwhelming, as is the overdose rate. People seem to be without hope due to the lack of jobs and poverty. But one thing I know for sure is that God loves us and the people in this community.

In the midst of the COVID-19 crisis, we are providing bagged lunches for students and the elderly. A lot of vulnerable youth live in our community, and without going to school, we were concerned they wouldn’t get the food they depend on for lunches. We have also increased the amount of food boxes we are giving out, as our food pantry ministry has increased by about 300 percent since this began. Our people are longing to be back in actual church where we can have true fellowship. I think there are a lot of anxiety and stress being caused by this virus. People are wanting so much for this to be over and things to normalize a little.

Despite current circumstances, we had a wonderful Easter celebration. We streamed services on Facebook and YouTube and had over 530 people join online for the simple service we held at the cross outside of our church. One person contacted me and said he wanted to be saved and baptized. We talked on the phone together, and he placed his faith in Jesus then! We plan to schedule a baptismal service for him soon.

Also, on Easter, we delivered candy eggs to members of our congregation at their homes (with social distancing, of course). Folks enjoyed the small act of kindness that let them know we were thinking of them.

As we continue in this unprecedented and tough season, we are continually reminded that we need to trust God with our ministry. We struggle often with funding, but God has always been faithful and provided what we need to do his work in this community. I know he will continue, because the story he is writing in Mullens is not yet finished.