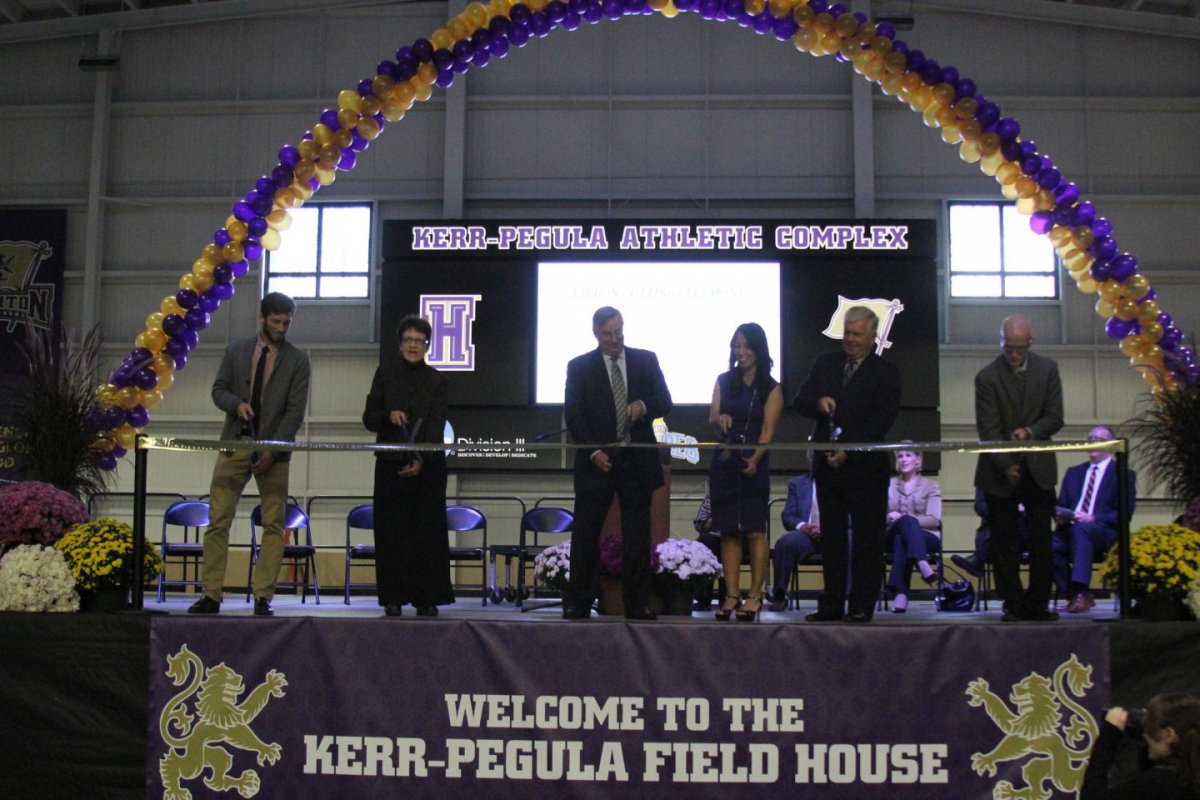 Kerr-Pegula Field House is dedicated at Houghton College, and a state politician called the facility a "game changer." H

It was the one word said by thousands of people who walked into the new $23 million Kerr-Pegula Athletic Complex as the field house was officially opened.

Soon-to-be Buffalo Bills owner and current Buffalo Sabres owner Terry Pegula and his wife, Kim, took part in the ribbon-cutting ceremony Saturday, attended a luncheon, and took a tour of the facility. Kim Pegula, a 1991 Houghton College graduate, is the daughter of Dr. Ralph and Marilyn Kerr.

Dr. Kerr was a local superintendent after teaching in Fairport and now is heavily involved in projects in Houghton and Allegany County. He spoke on behalf of the Kerr-Pegula family.

“I was asked, ‘What are the hopes of your family regarding K-PAC (Kerr-Pegula Athletic Complex)?’ The first hope is expansion. The expansion of the mission and ministry of Houghton College around the world and here in America. The expansion of the student body which we have seen this semester with an increased enrollment,” said Dr. Kerr. “As a result of that expansion, an expansion to serve with leadership around the world, K-PAC will draw (an) increased amount of people to events at Houghton College and the community itself, which we have seen in the revitalization of downtown in Houghton.”

He said the second goal is, “Our hope by giving back is to show other alumni and students, they can utilize their blessing, talents, wealth, knowledge or time, to glorify God and benefit our region.

State Sen. Catharine Young called the facility a “game changer” and, like others, noted no corners were cut as the entire complex is state-of-the-art and detailed with Houghton College logos.

“I want to thank (Houghton College President Dr. Shirley Mullen) for her strong leadership and thank the Pegulas for not only their commitment to Buffalo, but all of Western New York, Allegany County and Houghton College,” said Young. “Walking into this facility today I had to pinch myself, I could not believe I was in Allegany County. This is a game changer.”

Mullen, a 1976 Houghton graduate, opened remarks during the ribbon-cutting ceremony by saying, “We can hardly imagine all the possibilities opened up for our students, the athletic department, and the college as the result of this new facility. It will be the scene of countless team and individual victories.

Houghton College Athletic Director Harold “Skip” Lord said, “There is no question that the Pegulas’ generosity, and that of so many others, will enable us to better fulfill both our College and department missions. We are forever thankful that God has provided in this wonderful way.”

Jenn Suhr, a 2012 Olympic Gold Medalist from Fredonia in women’s pole vault, said she hopes to train at Houghton College to prepare for the 2016 Olympics.

“I am considering using this. It’s only an hour away from home, I would like to use this,” said Suhr after the event. “2016 is the next Olympics, I’m working on it now and I hope I can utilize what they’ve done here to train for the Olympics. Some places I work out at, they are not heated. This place is heated, there is good light, we have to go all over the country to find a place to train like this.”

There was a family fun fair all day, an alumni baseball game, an art show, and two soccer games on Burke Field, which was resurfaced as part of the project. The night ended with a sold-out concert by award winning Christian rock group Tenth Avenue North.