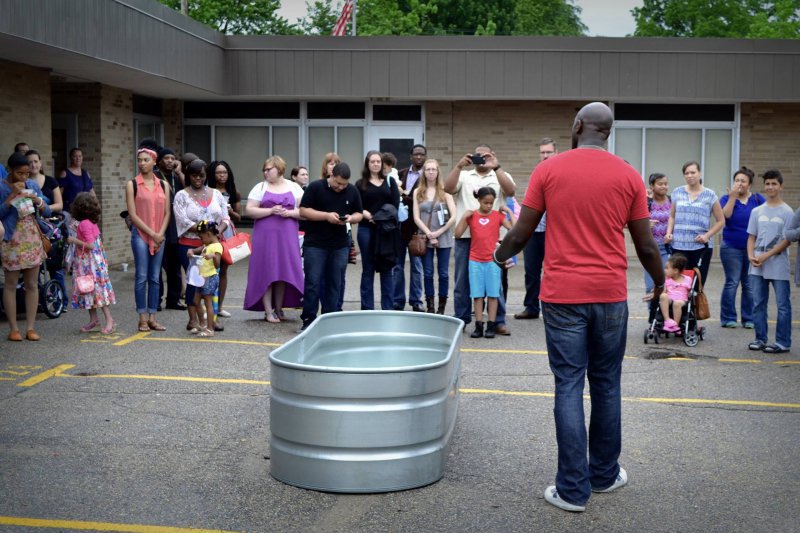 Rev. Chase Stancle and his church have claimed a five-digit number as their predominant mission field.

Unison was born in the fall of 2013, a multi-ethnic church in the 49507 zip code of Grand Rapids. What began as a vision of Rev. Stancle’s quickly spread to others in the community. Kentwood Community Church, also of Grand Rapids, is Unison’s sending or “parent” church.

In the summer of 2014, a total of 25 people gathered together, all dedicated to nurture a hope-filled vision: people of diverse races, ages, and socio-economic statuses coming together to worship God and love others in Grand Rapids.

Rev. Stancle notes that an intersection near Unison Christian Church “has been a dividing line in the community for decades.”

“We want to see this invisible line of separation become an intersection of cultural convergence,” he said. Church leaders and lay persons alike are excited about this multi-cultural church’s impact in and on Grand Rapids.

“The dream of seeing the church serving, worshiping God, and impacting the world together–in unison–drew more and more hearts to this work,” said Rev. Stancle.

That group of excited and committed individuals continued to grow, and on April 5, 2015, they launched Unison in an area elementary school building. They quickly outgrew their meeting space and in the fall of 2015, Unison teamed up with The Edge Urban Fellowship, and began renting space from the fellow Wesleyan and Grand Rapids church.

In the short time Unison has existed, folks have placed their faith in Christ, several have rededicated their lives to Jesus, others have been baptized, babies have been dedicated, small groups have launched, and ministry with other churches is happening to have an impact on this “49507 community.”

Unison moved into a temporary space in Grand Rapids while they restore and renovate a historic theater in the city. This building will serve as their permanent church home, as well as a community venue for ministry and outreach.

“We are purchasing the theatre to restore and renovate into a performing arts venue,” said Rev. Stancle. “There is a steady flow of prostitution and drug and gang activity in this part of our city, but there is also a thriving culture of performance instruction and local artistry that exists in pockets. It is our hope to centralize the creative activity in the heart of neighborhood, giving all this ‘good’ in our city a home.”

Currently, Unison is leasing the building while simultaneously raising funds to purchase it. As plans come together to renovate, the excitement for what God will do within that space continues to grow. The future is promising for Unison Christian Church and the 49507 zip code.