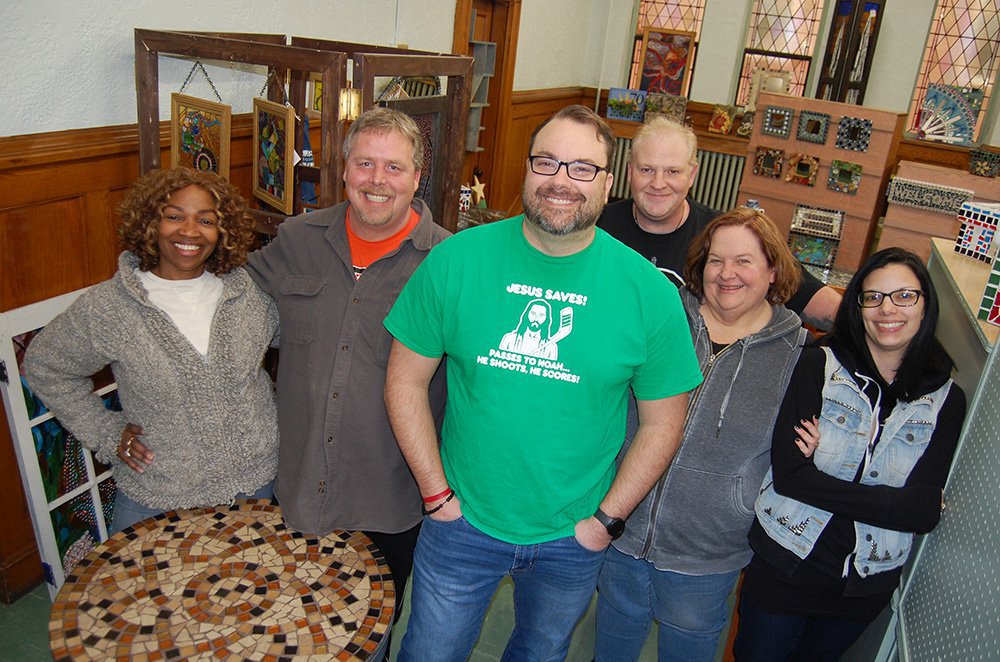 Artisans gather at a workshop in Utica’s Oneida Square in New York, adhesives in hand as they meticulously craft masses of plaster and glass into beautiful pieces of eclectic mosaic art. This is a place of second chances, where creativity flows and ideas run wild–and where lives are changed.

Such is the environment of Oneida Square Public Art & Design (OSPAD), one of the initiatives of the Oneida Square Project (OSP). The OSP is an independent nonprofit program that seeks to improve and beautify downtown Utica through social enterprises while creating a supportive network to address important community needs.

For founder and director Mike Ballman, a 1992 graduate of Houghton College, it’s a prime outreach opportunity, aiding populations with barriers to the mainstream labor market, such as individuals who were formerly incarcerated, have recovered from addiction, lack a high school degree, or have a disability.

Like many cities, Utica has fallen on tough times, and Ballman recognized the need in his own community for hope, particularly through economic incentives. His role as pastor of both Cornerstone Community Church and Plymouth Bethesda Church has made him a key figure in the community and its growth and development–and positioned him as a community leader. He has also been instrumental in the development of Houghton College Utica, where he will serve as an adjunct faculty member this fall.

Such leadership led to the creation of the Art & Design initiative. Cathy Marsh, chief designer, is a mosaic artist who joined Ballman in this quest to not only beautify Utica through mosaic trash cans but also provide employment for local residents. Marsh enjoys the challenges of deciding where each piece goes in relation to the others, teaching the new artisans the work and “opening people up to their own possibilities.” The outreach initiative is, in Marsh’s words, “symbolic of who we are . . . taking broken pieces and making them beautiful.”

Employees and volunteers find motivation in one another’s stories and lives, see the drive to overcome challenges, and use art as a catalyst for recovery. Connie–known for her bright smile that lights up a room–was a single parent, having just lost her father and was left disabled due to a car accident. Doug, the production manager at the project, was unable to work for several years and turned to heavy alcohol and drug usage, nearly breaking him and his family. Other employees share similar accounts of overcoming hardship yet emerging victorious, using those experiences to encourage and support others.

It’s an empowering approach, putting the tools in the hands of the workers themselves and entrusting them with the success of the enterprise.

Ballman finds that his time at Houghton fostered his approach to a life of service, prompting him to emphasize a “care for others, for neighbors, [and for the] the mission of putting others above ourselves.” He hopes that Oneida Square Project’s unique model for church and community outreach puts a call into each person’s life, inspiring deeper connections and initiating positive, lasting change.

Photo: the team at Oneida Square Public Art & Design. Mike Ballman is in the center in green.