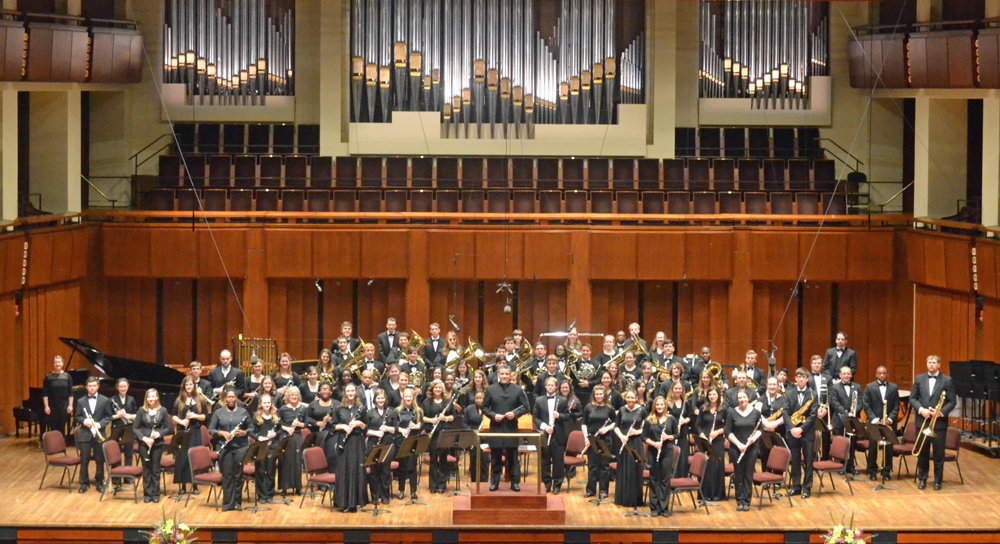 The National Christian Honor Band, sponsored by Houghton College, held its inaugural performance at the National Sousa Band Festival on May 31 at the JFK Center for the Performing Arts in Washington.

The National Christian Honor Band (NCHB), sponsored by Houghton College, held its inaugural performance in front of a full house at the National Sousa Band Festival on May 31 at the John F. Kennedy Center for the Performing Arts in Washington.

The Sousa Band Festival is an exclusive invitational event that featured four ensembles from throughout the United States including the NCHB, the Southeaster Wind Symphony of Southeastern Louisiana University, the Quabbin Regional High School Symphonic Wind Ensemble from Massachusetts, and the Chaparral Middle Wind Ensemble from California.

“The first National Christian Honors Band was a memorable experience for students and audience alike,” said Dr. Armenio Suzano, dean and director of the Houghton College Greatbatch School of Music. “The electricity generated by the passionate performers washed over the audience in ways seldom seen in one-time events such as this one. The fact that Houghton College provided such a unique, professional-level experience to our music students is a badge of honor that I will carry for as long as I am a member of our Houghton community and, in fact, for the rest of my professional life.”

The NCHB is an interdenominational ensemble consisting of over 90 participants from various schools in the Northeast and Mid-Atlantic regions with the Houghton College Symphonic Wind Ensemble making up the core group. The participants for this inaugural performance gathered for a one-day rehearsal in Maryland days prior to the festival and, from there, performed three separate concerts at venues including The Martin Luther King Jr. Memorial; the Army Veteran’s Home in Alexandria, V.A.; and the John F. Kennedy Center for the Performing Arts in Washington.

Suzano; Kevin Dibble, assistant director of choral activities and coordinator of music admissions and recruitment for Houghton College; and Dr. Marshall Forrester, director of bands at Charleston Southern University, conducted a performance of a variety program, which included a march by John Philip Sousa, “Adoramus te, Criste” by Gasparini, and “Rejouissance” by James Curnow, among others.

The final piece in the program, an arrangement of “America, the Beautiful” conducted by Suzano, prompted a standing ovation by the audience, which included Houghton College’s president, Dr. Shirley Mullen; her husband, Dr. Paul Mills; and Houghton alumni.

“The atmosphere was incredible, and The Kennedy Center is one of the finest concert halls in the country,” commented Dibble. “The students were all so gracious and performed excellently. I don’t know when I will ever again have a performance experience like this past weekend. It was an incredible honor to be a part of this inaugural project with the NCHB, and I can’t wait for future projects!”

The National Christian Honors Band marks the first time an instrumental group from Houghton College has ever performed at Kennedy Center.