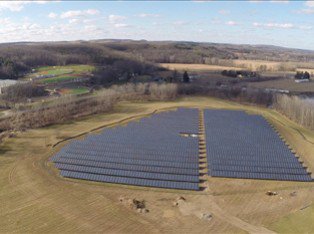 The system will generate an estimated 3.15 million kilowatt hours of electricity in its first year of operation, which is enough energy to meet more than half of the school’s electricity needs. The array will allow the college to realize a 23 percent first-year greenhouse gas reduction and save up to $4.3 million during the 25-year power purchase agreement (PPA) contract period.

The project was designed and built by Borrego Solar Systems Inc., a designer, developer, and installer of grid-tied solar photovoltaic systems, and financed by WGL Energy, through a PPA that covered all upfront costs. General Energy Solutions provided the 8,568 plus solar panels for the project.

The project has been made possible in part by New York’s solar policies, which have supported rapid development through incentives, supportive permitting procedures and other programs to get more solar deployed. This past spring, the State’s NY-Sun initiative awarded $46 million for large-scale solar energy projects through the NY-Sun Competitive PV Program administered by the New York State Energy Research and Development Authority.