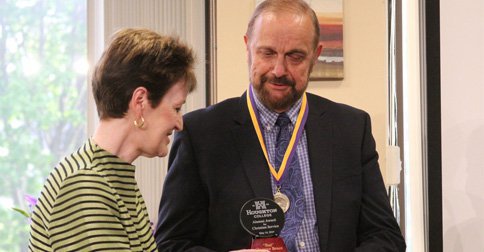 Dr. Bud Bence, a Houghton graduate and award winner, is considered one of the "most influential Wesleyans for our generation."

The Houghton College Christian Service Award honors Houghton alumni who have made a significant impact for the Lord through outstanding service in a variety of areas such as church, the community, their professional career, and the college.

Dr. Jack Connell, Dr. Bence’s nephew and current academic dean at Houghton, graciously shared these words: “Bud Bence is known across The Wesleyan Church as one of our most gifted communicators, one of our most insightful thinkers, one of our most devoted churchmen, and one of our most influential teachers and mentors. He is one of those rare individuals who can, during the week, present a compelling scholarly lecture to a room full of PhDs and, on the weekend, make the gospel come alive at a camp meeting or country church. When you take into account his preaching, teaching, pastoring, writing, leadership, and personal investments in the lives of so many, he is without question on the short list of the most influential Wesleyans of our generation. I am privileged to call him Uncle Bud, but he’s more like a big brother. His guidance and encouragement and modeling are among God’s greatest gifts to me, and I am beyond honored to now be occupying the office at Houghton College that he so capably filled 25 years ago.”

Dr. Bence spent much of his youth being raised in upstate New York where his father served as both a Wesleyan pastor and district superintendent. In 1962, he became a student at Houghton, earning a bachelor’s degree in philosophy in 1966 and then going onto Asbury Theological Seminary where he earned a Master of Divinity in church history in 1969.

Following Asbury, Dr. Bence went on to pastor a Wesleyan church in Rochester, N.Y., for five years before being accepted into the doctoral program at Emory University, where his studies centered on an in-depth analysis of the theology of John Wesley. He graduated in 1981 with a doctorate in historical theology.

For over three decades, Dr. Bence has served Wesleyan institutions of higher education beginning with United Wesleyan College followed by Indiana Wesleyan University. He then served as academic dean at Houghton College for five years before returning to Indiana Wesleyan where he has since retired from full-time teaching of church history.

Even in his retirement, Dr. Bence has continued to serve by teaching courses at Wesley Seminary and being involved in overseas ministry in Africa, Asia, and the Caribbean.

Dr. Bence has previously received the honors of an “Excellence in Teaching Award” and “Professor of the Year Award,” was the first recipient of Indiana Wesleyan’s “World Changing Faculty Award,” and was honored as “Alumni of the Year” by Asbury.

Dr. Bence’s Houghton College roommate and longtime friend, Jonathan Angell, said, “Clarence Luther Bence, a.k.a. Bud. We have been friends for 54 years. Roommates at Houghton where, as a vital cog in the Spirit of ’66 wheel, Bud could be described as brilliant, zany, eloquent, inventive, loyal, persuasive, godly and so much more. You have been an articulate spokesman for our Christian faith. You have been an exemplary husband, father, grandfather, son, and brother. You have been a Christ-like role model for thousands of students. You have been an effective apologist for Christian education, in general, and Houghton College, in particular. On a very personal basis, you have been a dear friend in some of my darkest days, and I know many who would say the same. So, on the occasion of our 50th college reunion, it needs to be stated that Houghton College loves Bud Bence. The Class of ’66 loves Bud Bence. Bud, you have made us proud. You are a man of faith, a child of God, and a friend to all. Congratulations!”

Known to his friends and loved ones as “Bud,” Dr. Bence is married to his wife Carol with whom he has three grown children.