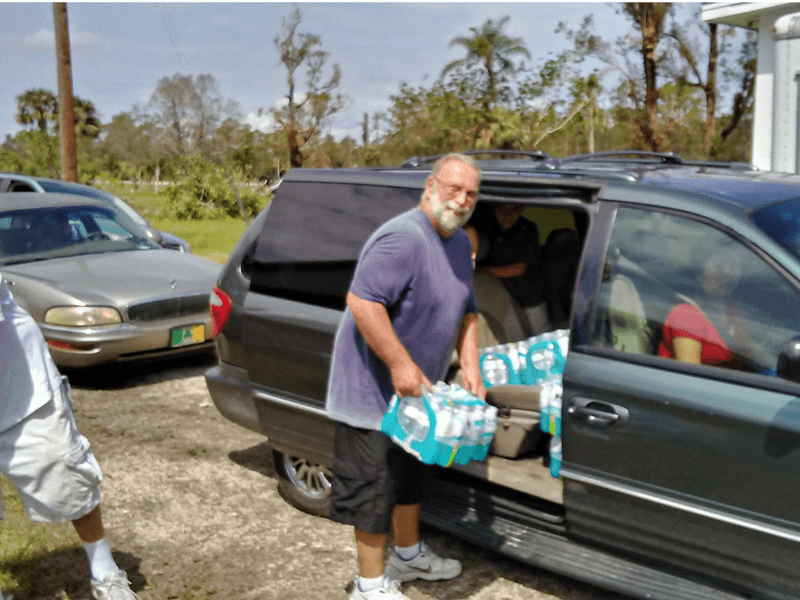 These pages cannot contain the whole in describing Saturday, September 30, 2017! This was food distribution day at Countryside Wesleyan in Alva, Florida. We were ministering to our neighbors impacted by Hurricane Irma.

As we began our sharing of food and supplies, a fellow pastor commented, “This is how the body of Christ should work!” Many Florida Wesleyan church pastors and members had gathered to assist in distribution.

Rev. Rick Stevens, Diplomat Wesleyan Church in Cape Coral; Dr. Tom Armiger, Villas Wesleyan Church in Fort Myers; Dr. Obed Morales, Iglesia Wesleyana La Cosecha in Alva; Rev. Kevin Barnsdale, Countryside Wesleyan Church in Alva; and Pastor Mark Benedict and his wife, Ronda, and people from Peace River Wesleyan Church in Port Charlotte were present. Many other volunteers from the state also came to assist in the relief effort. Together these pastors, their people and volunteers shared Jesus’ love and compassion under the hot Florida sun. They ministered to hundreds of people throughout the day!

The base of operations at Countryside Church became a beehive of service. A group of Wesleyan men from Pinellas Park Wesleyan Church, working alongside Steve Adams and others from Poured-Out, cleared fallen timber and brush and put tarps on nearby, damaged homes.

At the relief-supply distribution center, people ministered through the generous donations from World Hope International, Bagley Swamp Wesleyan Church in Hertford, North Carolina, and area Wesleyan churches. People received water, cleaning supplies, food, diapers, baby food and many other items through the generosity of others. In addition to physical needs, spiritual needs were also met.

Pastor Benedict had embraced the role of assisting visitors in carrying supplies to their vehicles. He also helped to carry their burdens to the Lord as he prayed with them. Dr. Morales and his family prayed in Spanish with Hispanic visitors.

“Many others were praying as the relief effort went on,” said Rev. Barnsdale. “The prayers spanned cultures as voices lifted in both English and Spanish. It was amazing to hear the prayers throughout the day and to view people in groups praying a prayer of thanks to the Lord.”

The results of the day are far reaching. Local neighbors dropped by Countryside in the days leading up to the distribution and volunteered to help. One family of seven helped us sort the donations and prepare the facility. Children from nearby Alva Elementary and Middle School jumped in like young adults and worked tirelessly to assist families seeking relief.

The people who stopped by were so grateful for the prayers and supplies. They were overwhelmed by the love of God’s people, especially when they learned the supplies had come from people scattered around the country!

Later in the day, we learned that another truck was on the way as World Hope had arranged the transport from Christ Wesleyan Church in Milton, Pennsylvania. This meant more supplies for extended distribution to communities.

The truck arrived at approximately 4:15. A young mother had received some supplies from the first distribution and was leaving. She was searching for diapers, which had been one of the first items depleted. She was in her car, backing out when Steve Adams from Poured-Out unloaded the truck’s first pallet. He shouted, “Hurry and let the young mother know there are diapers on this load!” Tears streamed down her face as she told us she had been unemployed for two months and now was dealing with the effects of the hurricane. God was on time, in time, at the time. Thirty seconds later would have had a completely different outcome. The change of her countenance was like a glimpse of heaven because of sacrificial Wesleyans from over a thousand miles away.

“At Countryside, we have been saying we have a new normal and that we are not sure we want to go back to the old normal,” said Rev. Barnsdale. “God is moving in our midst, and this storm has resulted in a demonstration of God’s love we’ve never witnessed before.”

One more thing to note: the neighbor family of seven that jumped in and helped was in service at Countryside the next day. Further, they have continued to help this week. The dad went out to work sites with Poured-Out while the mom continues to help us sort and prepare donations for another distribution day.

Thank you all for helping us know the body of Christ stands strong in the storm! 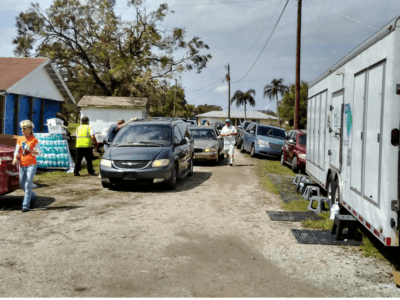