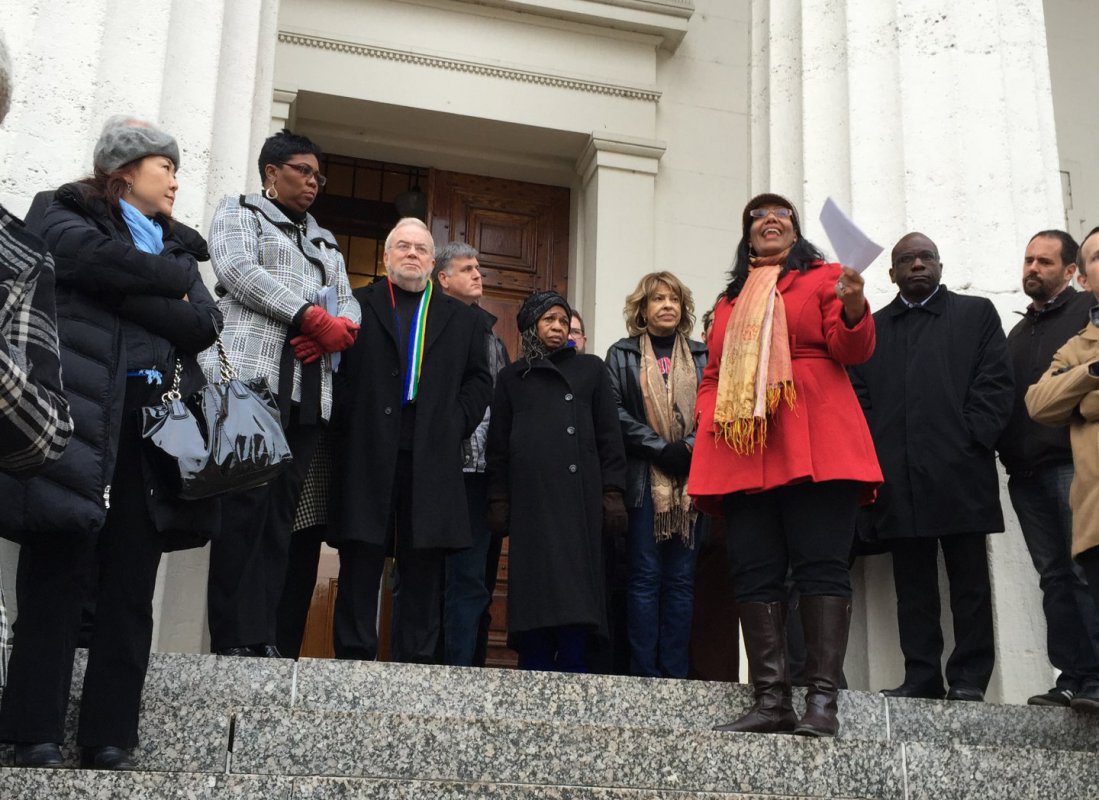 ​Beth Cossin was entrusted with the honor of representing The Wesleyan Church at a Faith Leaders Gathering in Ferguson, Mo. She arrived feeling inadequate but committed to listen, learn, and lament.

Recently, I was entrusted with the honor of representing The Wesleyan Church at a Faith Leaders Gathering in Ferguson, Mo. I arrived feeling inadequate but with a commitment to listen, learn, and lament.

To call the atmosphere tense would be an understatement. Socrates talks about the “tension in the mind” that is needed to creatively explore and analyze social constructs that we exist within. We had this in spades throughout this gathering and readily acknowledged the tension in the space, but as Martin Luther King said, “Like a boil that can never be cured so long as it is covered up but must be opened with all its ugliness to the natural medicines of air and light, injustice must be exposed, with all the tension its exposure creates, to the light of human conscience and the air of national opinion before it can be cured.”

There were many well-known orators, preachers, scholars, and activists in this gathering. There were words aplenty: Imago Dei, the veil of racism, white privilege, implicit bias, mental models of containment, systemic injustice, intentional poverty. Some meant to evoke a visceral reaction in the hearers, others rendered from a broken heart, and still others vented harsh words they knew could only be accepted in a safe space such as this. The atmosphere was charged with feelings of frustration, fear, and collaboration; all mixed together with the hope that the Bride of Christ may rise to the challenge to model hope, healing, and reconciliation.

Lesson 1: I am taking away the importance of being willing to put ourselves in disadvantaged positions where we are the ethnic, racial, economic, and/or gender minority in our own country. While I am accustomed to being in the minority, a woman in a male-dominated profession, it is different to be in the racial minority. We learn differently in that posture, and it positions us for the “tension in the mind” that we need to really get to the heart of some of the issues that plague our country, our communities, our churches, and us.

Lesson 2: We can change policy, laws, procedures, and systems all we want (and we need to do this). But unless hearts and minds are transformed, we will end up with different systems that are still broken systems. This is the gap that the church can most readily step into. Building new bridges of conversation, relationship, and healing. I think of the healing power of the Spirit of God represented in Isaiah 61 and referenced by Jesus in Luke 4 when he said, ” …because he has anointed me, to proclaim good news to the poor. He has sent me to proclaim liberty to the captives and recovering of sight to the blind, to set at liberty those who are oppressed.” As Jesus was sent, so we are sent as his ambassadors to the world that we live in.

Lesson 3: There is more than one way forward in our heightened awareness that race is still an issue in America. There were 40 of us gathered in a room and almost as many perspectives and opinions about what needs to be addressed first. We need to look outward, but we also need to look inside ourselves. This requires humility, discernment, grace, and forgiveness. For change must begin inside of each of us before we can begin the needed journey of reconciliation. We must each continue to do our own self-work and purposefully build a greater sense of community and kinship within and across racial lines.

Romans 12:15 reminds us to “weep with those who weep.” I’m not generally given to tears and while tears are not the sole measure of sorrow, it is a good indicator. My tears flowed then and now as I sit in the ash heap of the reality of the racial divide, not just in America at large, but also within our churches. It is gut wrenching to be physically present with our black brothers and sisters as they cry out to God in their distress.

When the Eric Garner decision of ‘no-bill’ was released on December 3, we were still meeting in one of our sessions. This news quickly circulated and the tears and anguish began to flow. As a white, educated, and advantaged clergy member, I really had no personal context to bring in what this decision felt like. It could have been an “outsider/insider” moment but instead became the most beautiful framing of our time together. We gathered in collective lament crying out to God for understanding, for courage, for reconciliation that would begin with us. We then moved into a circle of relationship where we held hands, sang, and hugged those who moved through the circle because they needed to experience healing. It was in these moments that a sense of “we” was formed. In my moment of greatest discomfort, God wrote this truth on my heart; one that I’ve known, but have often strayed from. Mother Teresa said it like this, “If we have no peace, it is because we have forgotten that we belong to each other.”

As I process the issues facing our country I feel hopeful for The Wesleyan Church– that the arc of our narrative originates in standing against a culture and system that affirmed and supported slavery. Unlike some denominations, we don’t have to recreate who we are; we just need to reaffirm it. We need relationships, theology, and conversation that will challenge and reshape our current understanding of systems, institutions, and rhetoric. We have the opportunity to be at the forefront of substantive action as we engage with reconciliation that must happen amongst all the races that call America home. It is my fervent prayer that we will humbly repent and be strong ambassadors of the message of reconciliation.

For more reading that contextualizes for us some of the issues that have been brought to the surface again, read Dave Drury’s, “Five ways to respond to MLK’s Letter from a Birmingham Jail.”

Beth Cossin serves as coordinator of Wesleyan Justice Network with Church Multiplication and Discipleship for The Wesleyan Church.