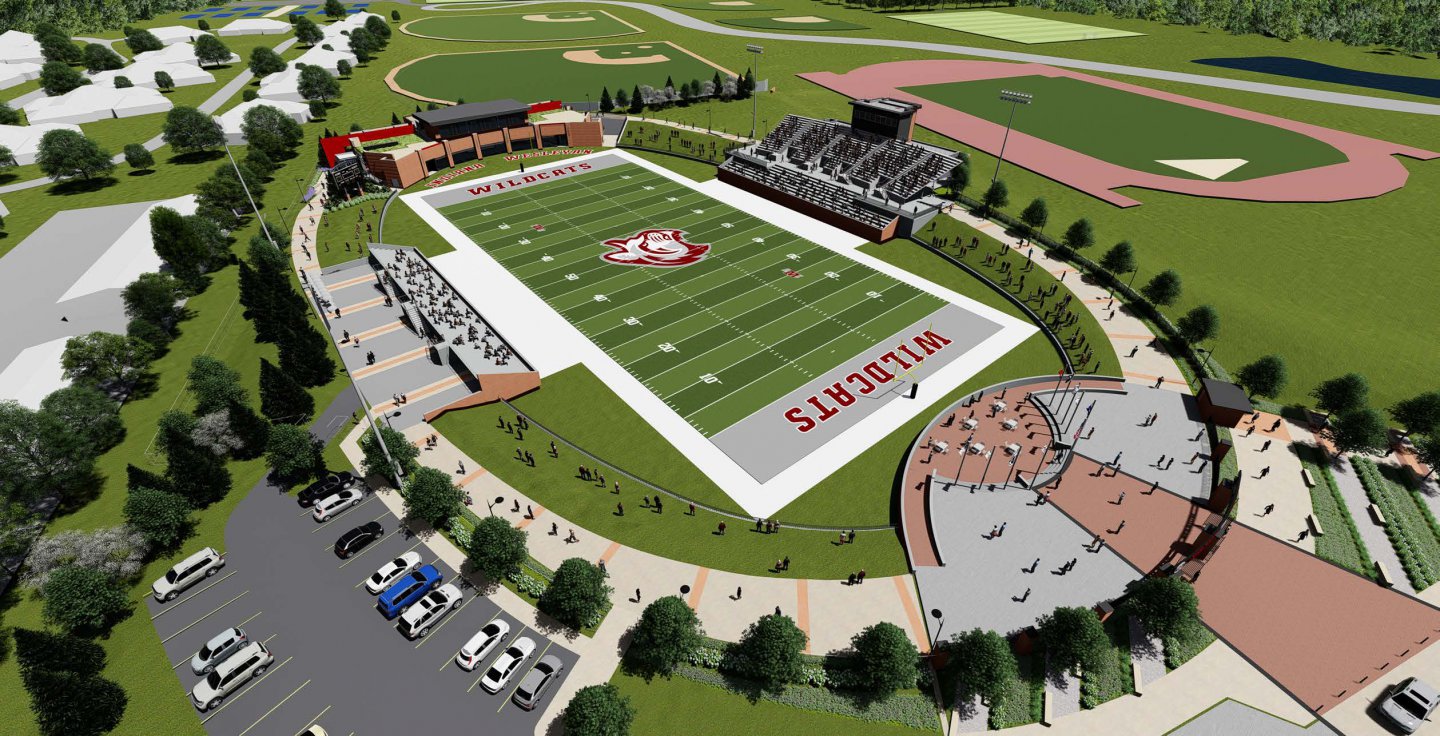 Indiana Wesleyan University has broken ground on its new football stadium, to be completed by the fall of 2018.

Indiana Wesleyan University broke ground for the new Wildcat football stadium on Monday, August 15. The stadium site is located on a five-acre lot at the former Seybold Park on 45th Street, which is adjacent to and just east of the IWU track and field facility.

“We are pleased that the football stadium site and initial design concept have been approved,” said Mark DeMichael, Indiana Wesleyan director of athletics. “It has been a pleasure to collaborate with John Jones, Don Rowley, and our outstanding operations team in the development of the stadium concept. Our goal from the beginning has been for the football facility to reflect the excellence that people have come to expect from IWU. We feel confident that this design accomplishes that goal and that our entire Grant County community will be proud of this new addition to our athletic facilities.”

The new stadium will have a capacity of 2,500 seats and the playing field will be dug down three feet to give the stadium a bowl design. There will be berm seating around the field to boost total capacity to around 4,000. The playing surface will be an artificial turf.

“A new football stadium will be an exciting addition to the Marion campus,” said John Jones, Indiana Wesleyan vice president of operations. “It is a pleasure to work with Mark DeMichael and his team to design and build a facility that will become a signature element on our campus. This stadium will become a valuable asset to the Marion community as it becomes the catalyst to welcome new guests to Marion and local businesses.”

The south end zone will have a 17,000-square-foot support building. This facility will host a 3,400-square-foot locker room for the Wildcats and a 4,300-square-foot weight room and workout area that will be used by all Wildcat intercollegiate athletic teams. There will also be meeting rooms and an athletic training room. Brick will be used on the exterior of the building in order to match designs used throughout campus.

The current berm on the east side of the IWU track will be expanded and will reach the baseball field and the new football support building. This will allow for a lawn area that can be used to watch baseball, football, and track and field events. The expanded berm and lawn section will force the baseball outfield wall to be moved in approximately 15 feet. A new padded wall will be built from left field towards centerfield to support the berm, and a new fence will be installed around the entire outfield.

Gameday parking will not be an issue as Indiana Wesleyan has many lots available in the vicinity. Parking will be available at the IWU Outdoor Athletic Complex, Center School, the former Marsh and Phillippe Performing Arts Center.

Said Jones, “Through countless hours of meetings involved in planning a facility such as this we have arrived at what I think is a design that will honor our mission as a Christ-centered university, Christ-centered athletic program and our commitment to excellence in all we build.”