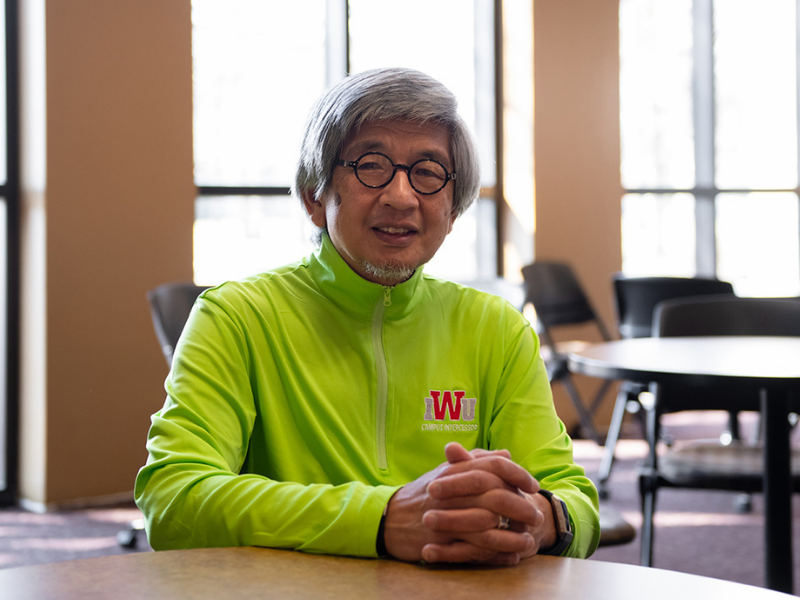 The IWU professor does five to six prayer walks a week and has seen God answer prayers as a result "time and time again."

As early as 4:00 a.m., Dr. Jim “Umfundisi” Lo, professor and campus intercessor, is already on the Indiana Wesleyan University (IWU) campus covering the university, its students and its faculty and staff in prayer. However, rather than simply sitting in his office to pray, he physically walks the campus as he speaks to God in a discipline he calls “prayer walking.” On Wednesday, March 20, Lo completed his 1,000th prayer walk on the IWU campus.

“I do them in obedience to God,” said Lo, who does five to six prayer walks per week. “I felt God asking me to do these walks.”

Approximately six years ago, Lo felt the Lord calling him to walk the university grounds any time he was physically on campus. Additionally, he wanted to keep the new president in his prayers.

“When Dr. [David] Wright became president, his father, who was general director of World Missions for The Wesleyan Church when I was a missionary, asked me to keep his son and family in my prayers,” said Lo. “I made a commitment to Dr. Wright’s father that I would pray for his son as he led IWU daily.”

Over the past several years, Lo’s prayers have lifted up not only Dr. Wright, but also students, faculty and staff. As he walks through buildings, he prays for those who enter them. As he passes leaders’ offices, he asks for divine wisdom to be given to them. When he meanders through the Recreation and Wellness Center, he prays that IWU coaches and athletes will do their best for the glory of God. As he walks through parking lots filled with cars, he prays for safe travels. When he passes McConn Coffee Co., he lifts up the fellowship that takes place there.

“There are times when I am walking and I will ask God to place the name or image of those I need to be praying for,” said Lo. “How often he has done this and to find out later, there was a reason God had me pray for those individuals he placed on my heart to lift up in prayers.”

While the topics and people he prays over vary, according to Lo, one prayer he always prays goes like this: “Lord, when guests come onto our campus, may they sense your presence even before anything is said to them.”

And God has answered that prayer time and time again.

“I have heard, down through the years, guests testifying about how they sense God when they step foot on our campus,” said Lo.

When asked why he chooses to physically walk while he prays, Lo refers to the Old Testament account of the Israelites walking around Jericho seven times before the walls fell flat. “[The story] is a model of extending God’s kingdom through man’s humble availability and faith joined by God’s miraculous ability,” said Lo. “Prayer walking can be a means of releasing God’s power.”

Seeing God’s power at work has led Lo to be passionate about training students in the discipline of prayer walking. In fact, he leads prayer walks — typically on Friday afternoons — for students who are interested in joining him. Interestingly enough, many alum who trained under Lo now practice prayer walks in their own corners of the world.

As for the future, Lo plans to continue his prayer walks and lifting up IWU, its people and its purpose to the Lord — all before sunrise.

“My purpose for prayer walking IWU is claiming her for God’s glory,” said Lo. “Praying for God to continue to do his mighty work here, asking God to send his revival, for his continual protection, for God to continually touch hearts, for our students and alumni to be bright lights for Christ, wherever they are … for his miracles to take place.”