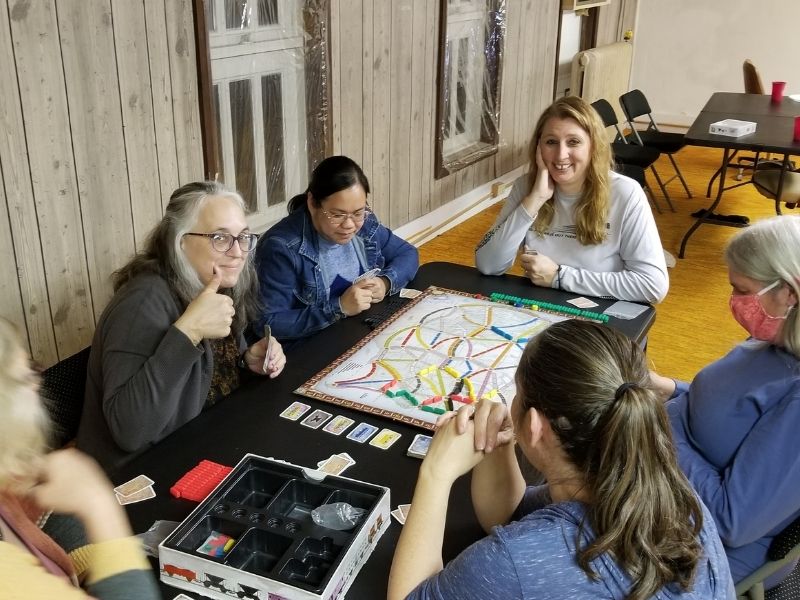 A small town is brought together by a duo's love of board games and video games.

It’s one thing to encourage people to “seek first the kingdom of God.” And when those people actually start investing copious amounts of their own resources and their very livelihood into that mission, things quickly “get real.”

When we accepted a call to pastor the Wesleyan Gospel Chapel (now Wellspring Chapel) in 2000, and moved to the small, rural town of Gordon in western Nebraska (just a few miles from the Pine Ridge Indian Reservation in South Dakota), I’m quite sure I wasn’t prepared to be as much of a fish out of water as I ended up being. My wife, Laura, and I met at Kingswood University in New Brunswick. She was from Nebraska. I was an eastern Canadian. Nebraska is about as far as you can get from the ocean while still being on the North American continent. Add that to the fact I grew up in a church with more people than the population of Gordon, and you might get a sense of some of the challenges we were about to face.

I didn’t seem to have much in common with the average person in our small town: ranching, hunting, farming, fishing, drinking. But I did have some things in common with a certain subset of individuals —mostly teens and college students — who enjoyed music, drama, sci-fi, board games and other “geeky” pastimes.

One of the teens who joined our youth group, Joe, had been invited by friends. He started attending our church, placed his faith in Jesus and eventually accepted a call to ministry. During these years, it wasn’t uncommon for Joe and his friends to be playing board games at my house until the wee hours of the morning.

When Joe finished his pastoral ministries degree at Oklahoma Wesleyan University, he and his new wife, Kari, decided to move back to Gordon with their few possessions (and substantial college debt) since they didn’t feel like they had any full-time ministry prospects available. He told me, “I really feel like God is calling us to come back to my home church and help in whatever way we can.”

I told him, “We can’t pay you much, if anything; but I’m sure we can find you something to do if you’re willing!”

A few years of odd jobs ensued for Joe. We encouraged him to keep sending out his resume. During that time, he was officially ordained in The Wesleyan Church.

Our little church struggled to pay him even the most meager of honorariums. I was working a second job at the local high school as a choir accompanist in order to help make ends meet for my family of six.

When the opportunity fell into Joe’s lap to become a dealer for a new, local mobile phone company and Internet service provider, Viaero, he wrestled with the idea for a few weeks until God made it clear to him that this was to be his “tentmaking” opportunity (see Acts 18:3). For many years, Joe’s “geek squad” tech background served him well as he sold phones. Ironically, he ended up doing a lot of ministry, pastoral care and counseling from his corner storefront on Main Street. He also started hosting a Wednesday game night in his little shop, building intentional relationships with other geeks, gamers and hard-luck “outsiders” in our sleepy little community.

Fast forward a few years. We noticed a small trend of millennials and their children moving into our little town. Admittedly, this surprised us as years and years of people constantly moving away had helped us get very discouraged and a bit jaded.

One of those millennials, Brian, along with his wife and three kids, moved to Gordon from Colorado not too long ago. Their former church sent them to our area in a kind of missional capacity to work primarily in Native American ministry. Brian and his family bought a house in Gordon and discovered our church. They got involved, and Brian became good friends with Joe. Brian works with a marketing company out of the United Kingdom and is fully able to support himself and his family.

One day, as Joe and Brian dreamed together about how to impact our community, they hatched a crazy idea of opening a game store — a place where kids, teens and families could hang out and play retro video games, board games, pool, air hockey, ping pong, foosball.

When the local carpet store suddenly went out of business, the perfect space for such an endeavor became available. Because Joe and Brian were both able to support themselves through their respective businesses, they were able to leverage their resources to obtain the space and turn it into their dream. They did it in such a way that the game store only had to break even to remain viable. It was a big step, and one that neither of them would have taken on their own.

In December of 2019, Joe’s Games opened on Main Street and quickly became “the place” to be. People in our church family helped Joe move his Viaero phone store to the new location and decorated the rest of the game space accordingly, whimsically painting the walls with popular icons like Pacman, Zelda, Link, Donkey Kong, Mario, etc. Joe and Brian filled the place with retro arcade games, comfortable couches, a pool table, board games, a train table for the kids, air hockey, basketball nets and much more.

Joe’s Games has become a sort of “third space” for our church, as well as a social “shot in the arm” for a rural community that has seen decades of decline.

We have fellowship gatherings there. We have study groups there. We’ve done youth group lock-ins there. Local families have birthday parties there. Joe and Brian run game tournaments on Wednesdays and Fridays. I host a kids’ chess club in the upstairs space every Monday.

Joe, Brian and I meet for prayer there every Tuesday morning. My kids love to go down to “Joe’s” and hang out in that space after school. People join us for church activities there, though they would very likely not set foot through the doors of our church building. Brian also recently realized that Joe’s Games has also begun to serve as a hub and safe space for ministry with Native American children, teens and families in our town.

Some days, I walk down to the shop and soak it all in. I love the space. I love the atmosphere. I stand in front of the big game shelf and grin like a child who has just discovered treasure.

Joe looked at me the other day and said, “You know, this is really all your fault. All those late nights playing board games at your house.”

My family, our church and our little town are blessed to have this resource that brings hope and life to a community that has struggled economically, socially and spiritually for a long time. Somehow, God has used a displaced Canadian, a geeky, tech-savvy outsider and an idealistic, sold-out-for-Jesus millennial entrepreneur to build something none of us could have built on our own.

Despite the challenges of COVID-19, the creativity of rural people like Joe and Brian have helped our small town, as well as our church, not just survive but thrive. There’s an energy and a vibrancy in our church that, by all accounts, shouldn’t even be there. But it is. And we’re excited to see how God continues to work in our little town in new, fresh and out-of-the-box ways.

I may not live near the ocean, but every time I drive down Main Street, I think I see a lighthouse. It’s called Joe’s Games.