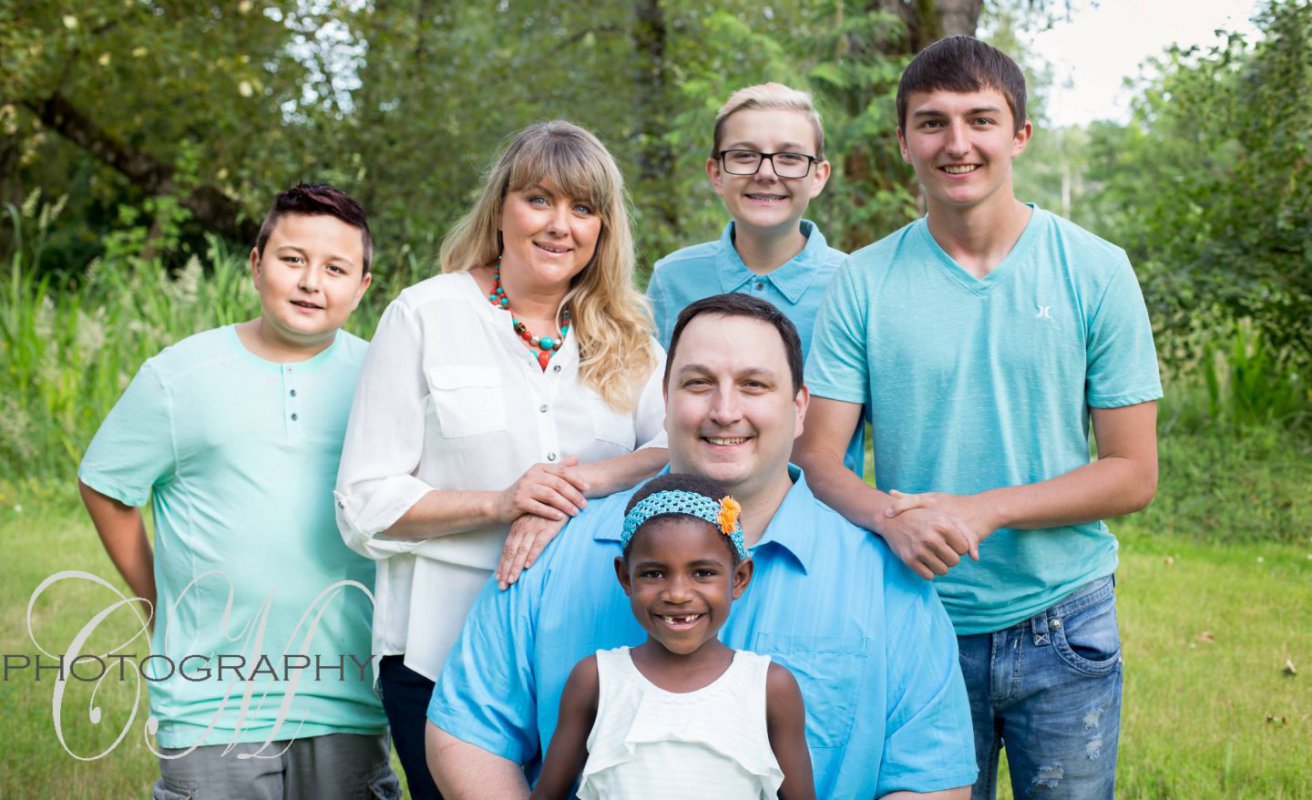 After nearly four years, Kora was welcomed into her "forever family." Her story is one of faith, hope, and perseverance.

The Wesleyan Church encourages every local church to recognize Orphan Sunday on a Sunday in November, and promote adoption and foster care. We are part of the Christian Alliance for Orphans. Check out all the resources on the site, and make plans to include Orphan/Adoption Sunday this year. See also, “The Wesleyan Church observing Orphan Sunday.” [Ed.]

When five-year-old Kora emerged from around the corner of the Portland airport on April 4, 2016, a group of more than 60 adults and children, most wearing “Welcome home, Kora!” t-shirts, began cheering.

After nearly four years, she was finally home.

Born Kora Berthe, she called the Democratic Republic of Congo (DRC) home. Like many Congolese children, Kora spent her days in an orphanage. When she was just shy of age two in 2013, she was matched with an adoptive family in Oregon–Jesse and Lisa Legner and their three boys, Quinn (16), Gavin (14), and Connor (10).

The Legners never planned to adopt internationally. Adoption had always been part of their conversation as a family, but they just assumed they’d adopt domestically. But when foster children were removed from their home to be raised by the kids’ grandparents, they began to fervently pray about international adoption. Soon after, the topic of international adoption began to surface repeatedly.

First, a fellow Wesleyan and high school friend of Lisa’s contacted her and told her about an adoption agency she’d been helping with. That same week Jesse received an e-mail from a college friend, requesting prayer for his upcoming transition to Africa to work in an orphanage. Then a former pastor’s wife asked Lisa if they’d ever considered adopting from Africa. The list of Africa and adoption encounters continued on.

“All of these things happened with one week,” said Lisa. “We said, ‘God, we are listening.'”

The Legners received confirmation from God that moving toward an international adoption was what he wanted. So they began the process in the summer of 2012. Based on their research of adoptions through the DRC, they would likely bring Kora home in 5-6 months.

Those months turned into nearly four years–992 days, to be exact–from the time their journey began to when Kora arrived home. In the midst of their adoption process, the DRC reestablished new adoption rules. Since 2012, more than 1,200 kids in the DRC have been waiting to be placed with their “forever families.” Currently, at least 40 are still waiting to come home.

The Legners and other families have spent the past four years advocating: taking trips to Washington D.C. to meet with government officials, writing letters to those in Washington, and making the public aware of the challenges they’ve faced. And while Jesse and Lisa know these actions of so many families have made a difference, they know prayer has been the true catalyst in the situation. People have been praying for Kora since the beginning, but when the adoption process began to stall, Lisa knew prayer was needed even more so.

“I think things changed because we set a lot of people in motion through prayer,” said Lisa. “I sent a letter to many Wesleyan churches asking people to pray for the release of our children. We had been stuck for so long, and I knew prayer could work when the U.S. government couldn’t do anything else.”

As the family waited to bring Kora home, she also endured serious health concerns and was near death. One time she was overcome paralysis of the right side and another time was diagnosed with malaria. In both instances, the Legners called on others to pray for Kora. They are convinced prayer saved her life.

Andrea Summers, director of women’s ministry for The Wesleyan Church, and Jo Anne Lyon, General Superintendent Emeritus, were also part of the process in helping Lisa be a voice for change.

The Legners’ church has gone above and beyond it its prayer and support too. Mountain View Wesleyan Church (MVWC) in Aumsville, Oregon, has been both “amazing and supportive.”

Church leaders and parishioners have helped the Legners raise funds and been consistent in prayer, all the while keeping Kora’s story present in people’s hearts and minds. Most of the crowd who greeted Kora at the airport on her arrival home were from Mountain View Wesleyan.

“Mountain View Wesleyan is a true example of what the local church is supposed to be,” said Lisa. “One reason we love MVWC so much is the family aspect of it.”

Rev. Mike Cline, senior pastor at MVWC, believes the Legners’ example of faithfulness and perseverance inspired many within the church.

“I think the Legners’ experience has been a faith catalyst for our entire church,” said Rev. Cline. “So many, myself included, have been inspired by their steadfastness of prayer and their pursuit of this adoption despite all the obstacles in their way.”

Rev. Cline notes that the support offered by MVWC attendees wasn’t “a highly coordinated thing.” Personal relationships with the Legners were key. Everyone rallied together in support for the Legners, especially in those moments when faith was hard to muster up because of current circumstances.

“Everyone had moments of doubt and frustration, and everyone relied on those around them who had stronger faith in those moments,” said Rev. Cline. “When the Legners’ faith was weak, we would carry them, and vice versa. Our whole church participated in that ‘faith dance.'”

MVWC is still living out its three core values of “love, live, and give,” as the Legners adjust to their new life with Kora.

She has now called Oregon home for about three months. While the adjustment has been tough at times, as is the case with most adoptions, Kora is exceeding expectations in her new home. She is learning English after only speaking her native Ligala upon arrival. She is also attending children’s church without Lisa needing to stay with her. Just recently she attended vacation Bible school at MVWC for the first time.

Lisa said Kora’s older brothers are adjusting well too. Their practice in caring for their little sister has come from volunteering alongside their mom, who serves as MVWC nursery director.

“They’ve learned patience as they’ve served, and now they’re living out that patience with Kora,” said Lisa. They’ve longed for a sister for so long and are grateful she is home.”

View the video of Kora’s arrival to the Portland airport.

The Wesleyan Church encourages every local church to recognize Orphan Sunday on a Sunday in November, and promote adoption and foster care. We are part of the Christian Alliance for Orphans. Check out all the resources on the site, and make plans to include Orphan/Adoption Sunday this year. See also, “The Wesleyan Church observing Orphan Sunday.” [Ed.] 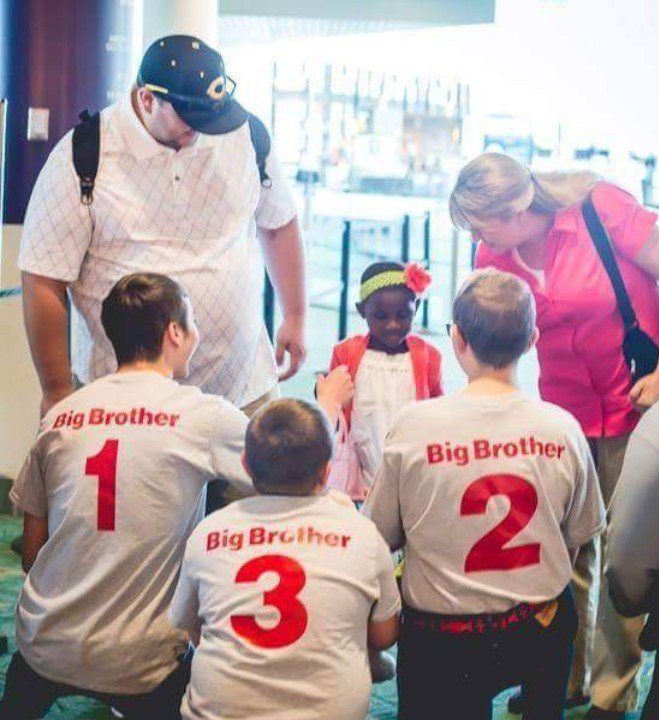 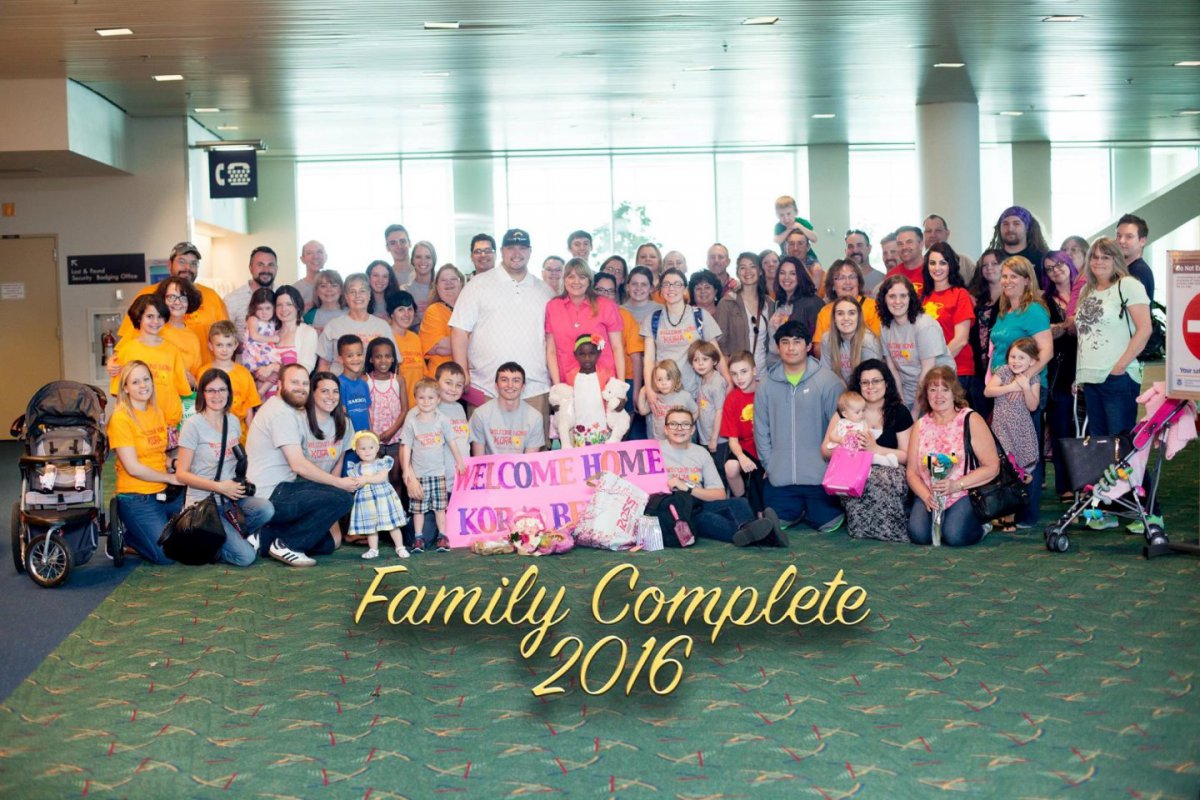 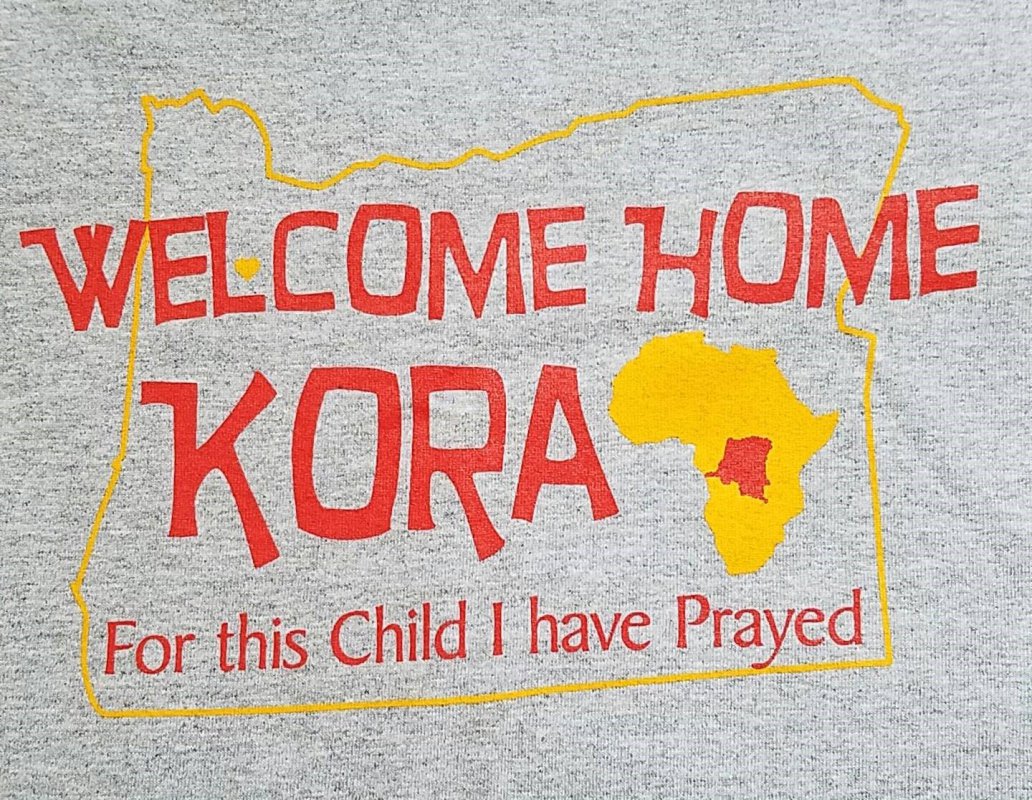 Proceeds from shirt sales went towards the family's adoption expenses. 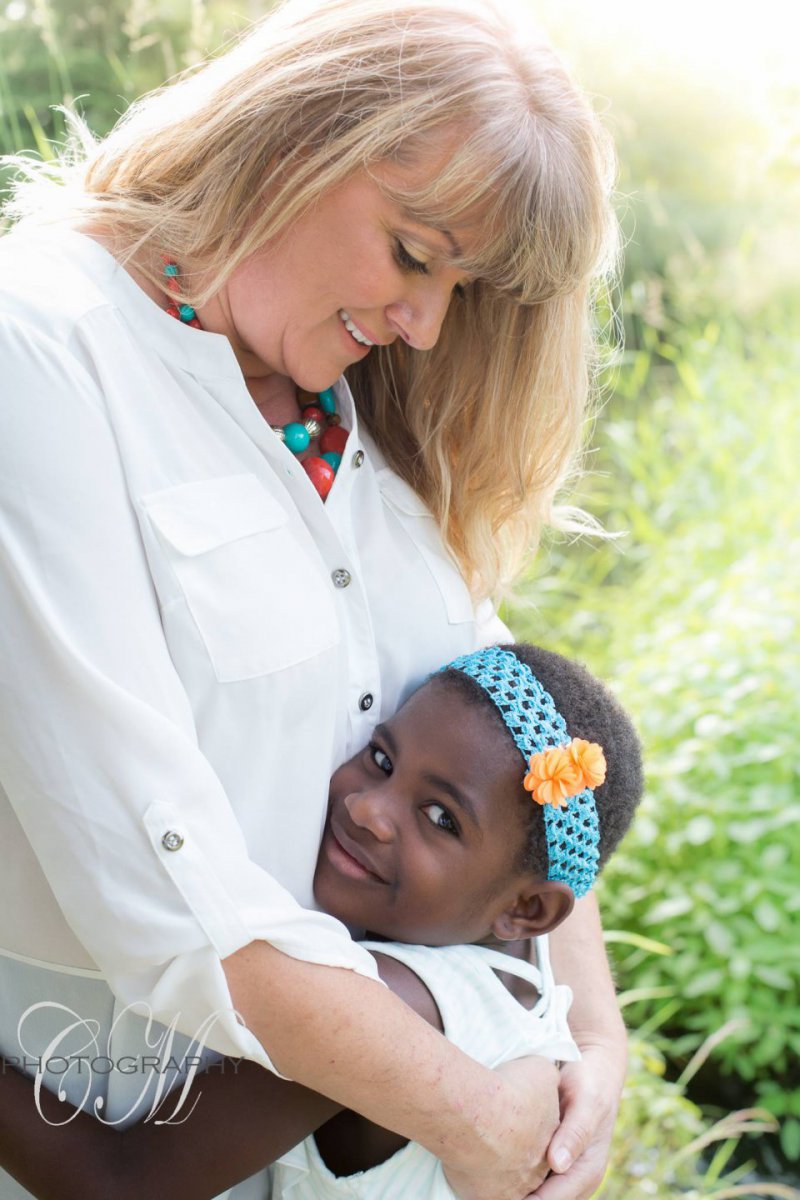 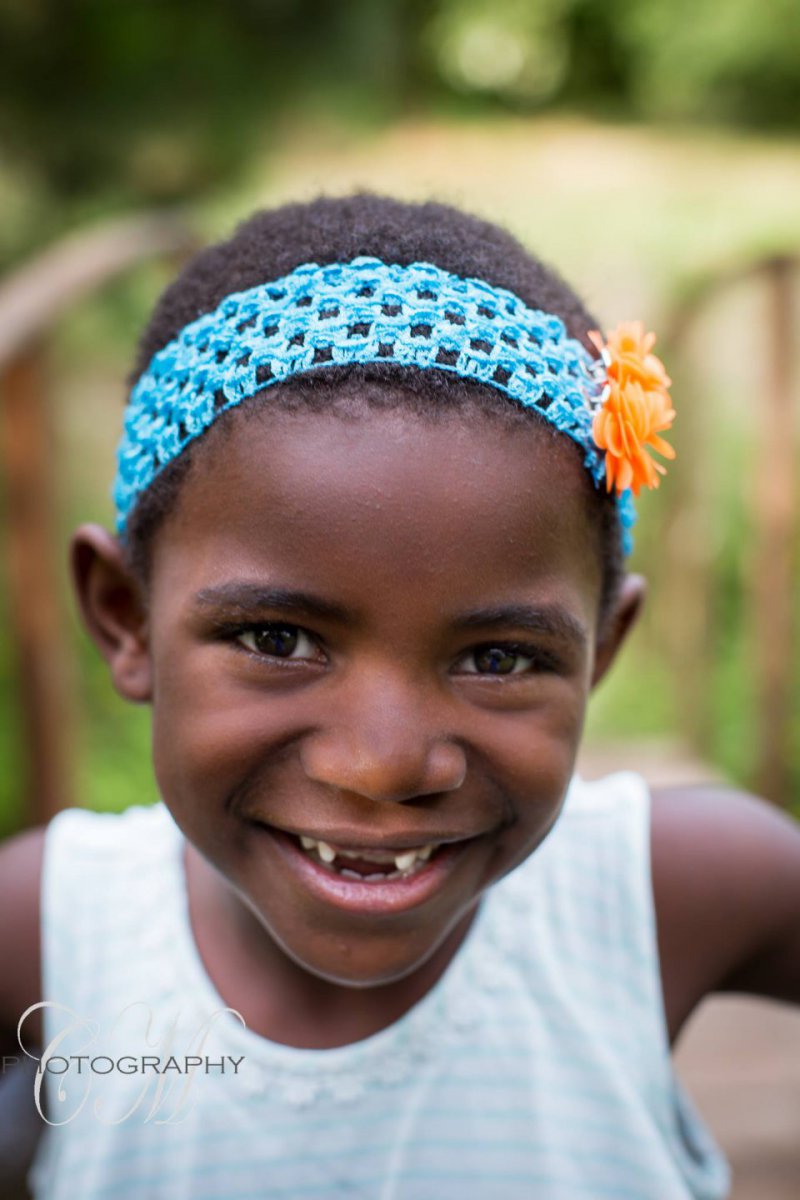 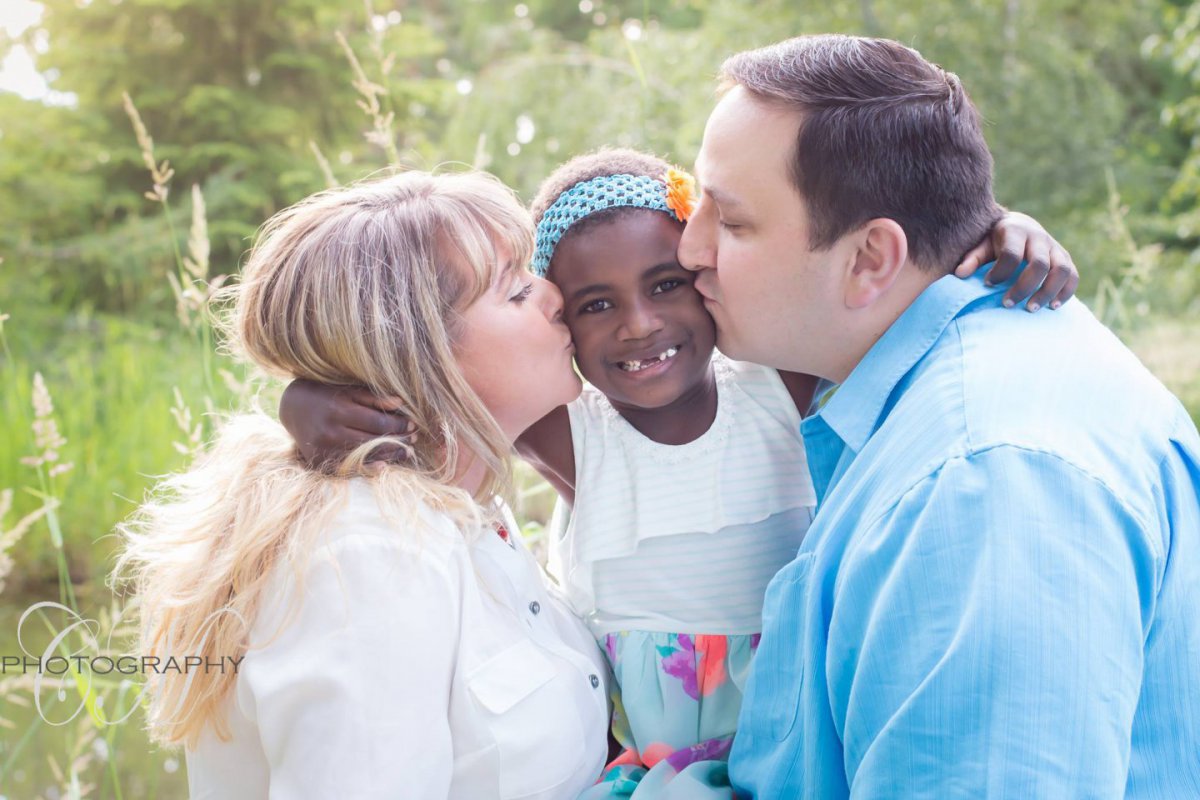