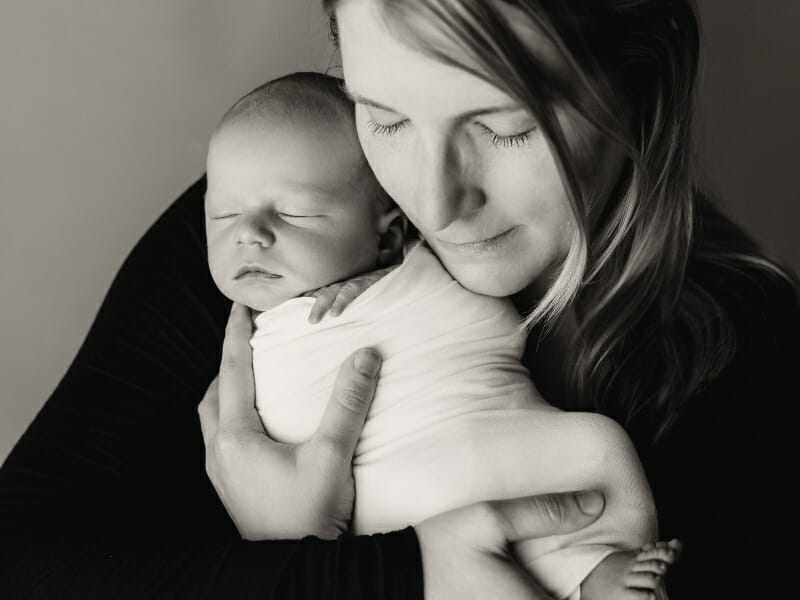 Lessons learned in the storm

While Renee and Pat Brown waited 10 years for the Lord to answer their prayers, God was working.

At 9:23 p.m. on May 17, when most of us were likely settled in with our favorite Netflix series, a couple in Wisconsin was experiencing what they believe to be a miracle—the birth of a healthy 7-pound, 9-ounce baby boy. In addition to the emergency Cesarean (C-section) delivery, the struggle to bring Baby Jack Aldo Brown into this world was an epic one that started about 10 years earlier.

That is how long Renee and Pat Brown, members of Hayward Wesleyan Church, Hayward, Wisconsin, had been praying for Renee to become pregnant. Even though she was diagnosed early of having not one but two diseases that make it difficult to conceive, Renee was determined to have a child. After fertility treatments failed and after suffering a devastating miscarriage, Renee started down a path of bitterness and anger mixed with anxiety, loneliness and depression.

And for much of that time, Renee struggled in silence—partly because of an undeserved shame she put on herself, and partly because of her past military experience that had taught her to mask her emotions and to just “suck it up and get through it.”

Through it all, God was with her. This baby journey taught Renee some life lessons she admits she would not have learned without the long season of infertility. Lessons such as taking the impossible and handing it over to God, or learning not to lean on worldly comforts, such as food or alcohol, but to truly learn how to ask God for the strength to face each day. She relied heavily, she says, on Philippians 4:13, “I can do all things through him (Christ) who gives me strength” and on Romans 5:3 that teaches us “suffering produces perseverance.”

Knowing that, however, didn’t mean there were no dark days filled with self-doubt, wondering what she had done wrong. Wondering if she was being punished for past sins and feeling envious when others around her were enjoying motherhood. In her darkest moments, Satan would whisper his most successful lies, “You don’t deserve this. You don’t deserve to be a mother. You are nothing. You have failed. Don’t go to church because you don’t belong there.”

But through it all God’s whisper was the one that penetrated Renee’s heart and rose above the lies. His voice told her, “You are loved.”

Even so, the trials kept coming. After the years of disappointment and heartache, to then lose unexpectedly and tragically what many people consider to be a member of the family, the beloved family dog, sent Renee into a bitterness tailspin. That’s when she learned a second valuable lesson: to embrace her own suffering and not pretend it wasn’t real, to share it with others and not worry about making friends feel awkward.

The greatest thing a friend can do, she says, is listen. “You can sit in silence with someone. Don’t try to reason why,” says Renee. Though people’s intentions are good; advice such as “you can always adopt a baby” or “you’ll find another dog” is unwelcomed. “At a time when I was so angry at God, a friend came over and was just sitting on the couch for like two hours, and we didn’t say a word. It was comforting to just have her there.”

Sometimes the best thing we can do is just be there. Just listen.

If we don’t try to smooth everything over, offer unsolicited advice and try to speed the grieving process, we allow people to release the hurt and pain so they can get to a place where they can hear God say, “Now, I have something better for you.” For Renee, God brought joy and peace into that void through responsibilities such as babysitting for friends, caring for ailing parents and giving her the time and space to grow deeper in her relationship with her spouse.

And while this is Renee’s story, her husband, of course, had his own struggle and path through this. “He’s very resilient and strong, and he wanted to be a father as much as I wanted to be a mother,” she said. Pat took on the role of the re-assurer every time Renee wondered if she was enough and sunk deep into her soul-searching moments. “He always wanted to be strong for me. … He was more positive.”

It is true that we cannot understand someone until we’ve walked a mile in their shoes. Those of us who leap to our feet in church on Mother’s Day and smile as the congregation celebrates motherhood don’t know that some women are silently and secretly dying inside. They are carrying around the wounds of infertility and miscarriages. Birthdays can even be a source of pain, Renee explained, as the would-be mother realized another year had passed her by. And when friends exclude women from functions for fear it would be hurtful, such as a baby shower, that can hurt too.

Renee experienced all these emotions. At some point she even asked God to simply take away her insatiable desire to have a baby. She worked through what she believes is the sin of pride of holding it all together. But then there was the focus on her identity and what she wasn’t. If she couldn’t be a mother, then what was she?

In time, or better yet—in God’s time—Renee was able to fill that void by knowing she was his daughter, and it was God’s love alone that saved her and his love “continues to save me every day. With him, we can persevere.”