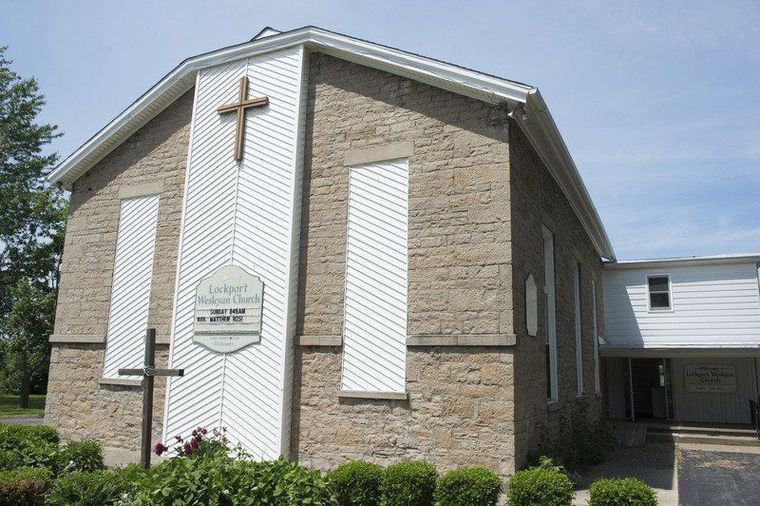 On Sunday, the congregation of one of the oldest churches in Niagara County marked the 180th anniversary of the first sermon delivered there, by circuit preacher Glezen Filmore, on June 13, 1835.

On Sunday, the congregation of one of the oldest churches in Niagara County marked the 180th anniversary of the first sermon delivered there, by circuit preacher Glezen Filmore, on June 13, 1835.

Pastor Matthew Rose led the 8:45 a.m. service at Lockport Wesleyan Church. At a 10 a.m. reception in the foyer, he shared some of the collected history of the tiny church and the families who have been a part of its community.

According to Lockport town historian Larry Haseley, the church is believed to be the oldest church in the area that has continued in its original denomination and its original building.

Its roots are traceable to the arrival of Titus Hall and Sylvester Flagler, who journeyed to Niagara County from Washington County on the newly built Erie Canal in 1826.

Hall, a farmer and a blacksmith, arrived first, with his wife and five children. They swapped their boat for a wagon at Orangeport and headed up Chestnut Ridge to McNalls Corners. The Halls moved closer to Lockport in 1829, settling where the Wesleyan church now stands, at Chestnut Ridge and Keck roads. Flagler, his wife and their 13 children moved to the area a few years later.

The children went to school at District No. 3 school house (currently the town historian’s office) and the families attended a Methodist church in Lockport on Sundays.

In 1833, the seeds of division over the issue of slavery appeared to be budding. According to local historian John Hall, a descendent of Titus Hall, the Halls, the Flaglers and a few of their friends were abolitionists and they all ended up leaving the Lockport Methodist church over the issue.

In “Come, Come to the Little Stone Church on the Ridge,” John Hall wrote about the rise of a new church for the abolitionists. Titus Hall, Sylvester Flagler, Theodore Stone, Moses Rummery and Elijah Gibbs were chosen as the first trustees and building plans began. Titus Hall donated a corner of his land and the church was constructed with local materials, at a cost of $1,350. The building was dedicated on June 13, 1835, by the Rev. Glezen Filmore, who used Isaiah 6:1-9 as his text.

In 1841, the society was legally incorporated as “The First Methodist Society of Chestnut Ridge” under the general act for the incorporation of religious societies. Trustees were Henry Norton, Jacob Gaunt, Sylvester Flagler, Samuel Wakeman and John Sybrandt. Two years later, division occurred within Methodism over episcopacy and slavery. The “Wesleyan Methodist Connection” was organized and the Chestnut Ridge church soon adopted the discipline of that connection.

One noted member of the early congregation, John LaBarr, served in the New York State Assembly and was elected to the Republican National Convention in 1860, where he voted for Abraham Lincoln and traveled to Illinois to congratulate him.

In 1866, the church building was enlarged, remodeled and repaired at a cost of $1,900, then rededicated by the Rev. Adam Crooks of Syracuse. Its affiliation was formally Wesleyan Methodist Church and Benjamin Laughlin became the first pastor of 17 members. Membership rose and fell over the years, but pride in the tiny church remained. In 1920, the congregation was advised to unite with Hess Road Wesleyan Church, but they declined. In 1938, the parsonage was destroyed by fire.

The first unit of the church’s educational building was dedicated in 1957 and the church won a Sunday school award from the Western New York District. By 1961 the church was free of debt, and a new parsonage was completed in 1963. The revival continued and a second floor was added to the educational facility in 1967. A year later, the Wesleyan Methodist Church denomination merged with the Pilgrim Holiness denomination to form The Wesleyan Church.

On May 18, 1986, Lockport Wesleyan Church celebrated a mortgage burning with reflections on church history given by (the late) Ray Aker. Dr. Daniel Heinz attended.

With the help of local history buffs, Rose has compiled a list of pastors who served the church throughout its 180-year history. Early churches were often serviced by circuit preachers and did not have in-house pastors, he said. He is serving Lockport Wesleyan as an extension of his full-time work at Hess Road Wesleyan Church in Appleton.

“Though small in number (average attendance is less than 20), the church is a wonderful church to pastor,” Rose said. “The members are eager students of God’s word and always interested in finding ways to connect to the community. It is the hope of the Lockport Wesleyan Church that we would make a positive impact in the surrounding area and not just survive, but thrive for decades to come.”

Sunday is Founders Day at Lockport Wesleyan and the community is invited to the worship service and reception. The worship style is a blend of contemporary and traditional.