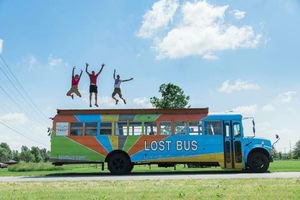 IWU senior Alex Brown traveled the country all summer in The Lost Bus as part of a trio of young men who perform community service projects where they find a need.

A multicolored school bus has rolled into Coleman to lend a few hands, courtesy of the Lost Boys.

Alex Brown, an Indiana Wesleyan University senior from Coleman, is part of the third trio to travel the country all summer in The Lost Bus–for Lending Our Services Traveling–performing community service projects wherever they find a need. Tuesday that need was helping with construction at the Coleman Wesleyan Church’s youth center.

“After that, we actually don’t have anything specific lined up,” said the former Coleman High track and cross country standout. Their plans for today and Thursday were still gelling Tuesday but that sort of freewheeling approach has served them for 7,000 miles.

The trio learned to drive the bus in downtown Indianapolis, hit South Carolina for the wedding of one of the bus’ creators, got poison ivy while clearing brush in Arkansas, performed tons of flood cleanup in Texas, fed the homeless in New Mexico, helped others from Colorado to South Dakota, and spoke to 200 teens in Iowa on their way back to projects in Brown’s partners’ Indiana hometowns of St. John and Angola.

“A lot of it is very spontaneous,” said Brown, 21, a double major in sports management and sports ministry. They sketched out a very general route, such as “Texas,” and called ahead to find specific places that wanted their help. Their tasks have included landscaping and painting, as well as assisting groups with tornado and flood relief work. “We like to consider ourselves jacks of all trades, master of none,” he joked, but their posts have made it clear they don’t shy away from hard or filthy work.

“As far as what we do, a lot of it is from networking,” he said, asking around towns they enter what needs to be done. “You can even go through a Walmart parking lot and people will come up.”

The Lost Bus took its first trip in 2011. Another member of the 2015 crew had heard about it from a presentation at his high school and kept it in mind. At IWU he recruited two fellow distance runners and they applied, interviewed and were accepted. Recruitment for a fourth team already has begun.

Right now that’s with an eye toward 2016 but that’s just the beginning. Their Facebook page says “open always,” and they mean it. Brown said, “The goal of The Lost Bus is for it not to be just a summer thing.”

The 1996 International Carpenter school bus sports a deck on top, a trailer behind and tanks underneath for propane, fresh water and wastewater. Battery banks power a refrigerator, lighting and plugged-in gadgets; solar power is on a wish list. The seats that once held 65 passengers have been replaced by three beds, a kitchen and storage space.

“The bus’s colorful appearance sends off different vibes to different people. We’ve been mistaken for all sorts of things.”

“We’ll be in Coleman all the time,” he noted of their stopover before returning to school. “If people want to see the bus, they can contact me.”

The bus itself, and the ministry, is not affiliated with any church. IWU helps them with publicity but the travel is 100 percent funded by donations–”Gas is expensive,” Brown said, laughing–and their initial funding was supplemented as they went.

“As we have traveled, there have been several people along the way, I guess they are inspired,” he noted. People who once were strangers have provided hot meals and hot showers, filled their gas tank, even performed free engine repairs. “We have been incredibly blessed.”

For more on The Lost Bus, visit www.lostbus.com or search “Lost Bus” on Facebook.