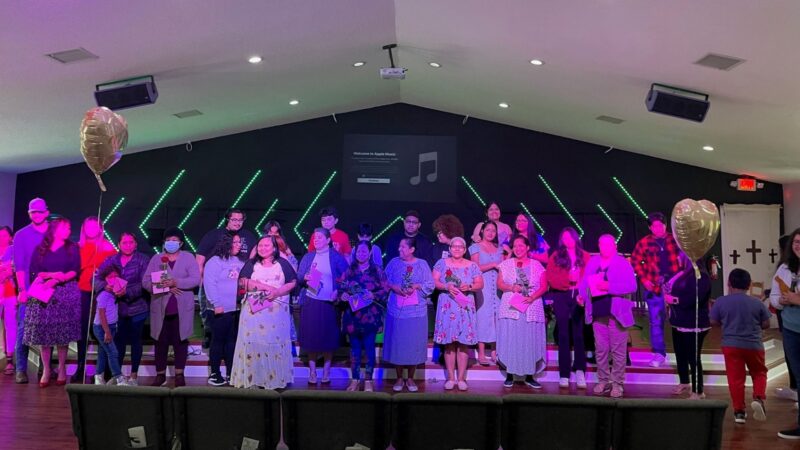 Casa Familiar in Kernersville, North Carolina, reopened nearly a year and a half ago under a new name with new leadership, and it would seem, with a new movement of God.

Taking over the first Hispanic Wesleyan church in the state, which had been struggling and shrinking to under 30 regular attenders, caused Rev. Norberto Gonzalez to pause when the offer was presented to him by District Superintendent (DS) Jonathan Lewis. Pastor Norberto and his wife, Nancy, were on a self-imposed break from ministry following a failed church plant in Asheboro, North Carolina, of which they were a part, as well as mourning the loss of Nancy’s father.

Nevertheless, Pastor Norberto agreed to visit Casa Familiar and returned with a sense of peace about taking on the lead pastor role. He presented the idea to Nancy, who reminded him that they were on a ministry break. Pastor Norberto says somewhat jokingly, “I told her, ‘Well, we may be on a break, but we’re moving to Kernersville!’ I felt like God was calling me there, and I said if God is going to do something, then God is going to do something!”

Casa Familiar sees encouraging signs of growth with 50 regular attenders and a Sunday attendance high of 70.

Perhaps more exciting to the Gonzalez’s are the recent salvations and baptisms of not only those in the local community but also as far away as Puerto Rico.

Assistant Pastor Martha Vasquez received a call from her elderly uncle in Puerto Rico stating he wasn’t sure how long he had in this world and needed to be baptized. With the blessings of Pastor Norberto, Pastor Martha and her husband flew to Puerto Rico to conduct the baptism. She ended up not only baptizing her uncle but her sister, who made the decision at that moment to give her heart to Christ, as well as one other person.

Pastor Norberto is also thankful for another adult congregant who gave her life to Christ. Just before moving to Mexico, she told Pastor Norberto that she felt the Holy Spirit touch her and remove all her depression and anxiety. Her husband also testified a week later that he believed the Holy Spirit touched his wife and something stirred in him at the same time. He then asked Pastor Norberto how to be set free. “I told him first we need to pray, then you need to learn more about the Bible and that God has something for you.”

Pastor Nancy is excited about what is happening in the children’s department. Three children recently asked about heaven and salvation and asked to accept Jesus into their hearts.

“I don’t know what God is planning, but God is moving at Casa Familiar!” said Pastor Norberto.

“Norberto and Nancy are both ordained and have provided excellent leadership in re-formatting the vision and purpose of the church within the community,” said DS Lewis. He believes The Wesleyan Church is providing important support for Hispanic and other minority churches.

“The first generation of people long for worship and spiritual development in the language of their hearts, so there will always be a valuable place in the body of Christ for churches who worship in a single language,” said DS Lewis. “However, as these churches grow and mature, and the people within their communities assimilate into the local culture, the second and third generations take on a more American cultural understanding. Our churches have an opportunity to reach those second and third generations.”

Reaching that next generation is exactly what Casa Familiar has next on its list to tackle. Being a church made up of Hondurans, Guatemalans, Salvadorans, Puerto Ricans and Mexicans, Pastor Norberto already brings those cultures together as the body of Christ.

“We have a big building, the sanctuary is upstairs, we have five rooms downstairs. We have everything we need,” he said. His plan is to use the church’s ample facilities to serve the youth by starting some sort of after-school program in the next year.

Those youth will no doubt benefit greatly by having a “familiar” place to call their own.