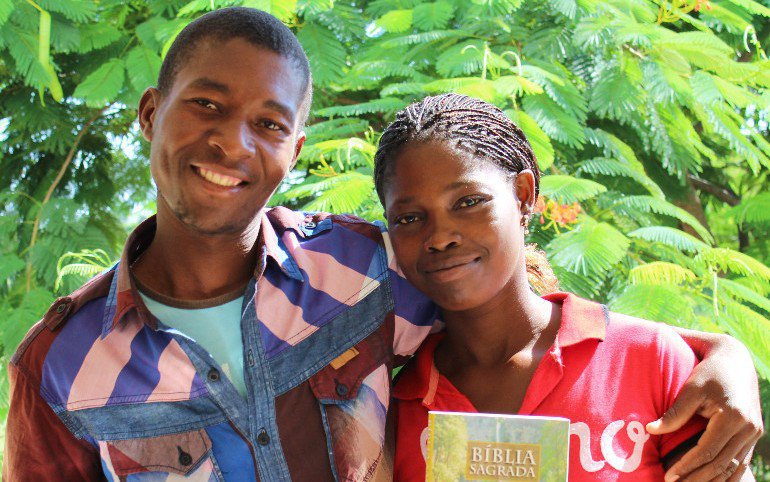 Jairosse and Esperanca are in their third year at Xai-Xai Bible College in Mozambique, graduating in October. In a class Global Partners Missionary Jim Pickett taught last year, Jairosse wrote his testimony:

“I grew up Muslim. I saw some things that disturbed me about the Muslim faith, but then I also saw people who called themselves Christians doing immoral things and I didn’t want any part of that.

As a young adult, I started drinking a lot. In 2011, I had traveled to a friend’s house and when I saw an Anglican priest I said bad things about him and made fun of him, but I sensed God’s presence around him.

I went home and the next day I noticed there was a Wesleyan church near my house. Sunday morning I saw one of my friends going there. I was drunk, but I walked in. I told the church I was just there to visit, but if I liked it, I would stay. The pastor prayed for me and gave me a Bible. I later accepted Christ. My life changed and I began helping at the church. I prayed for a wife, but I said, ‘God I have nothing to offer her.’ He spoke to my heart, ‘You have Christ to offer her.'”

Esperanca says in her testimony that her family also did not know Christ. As a teen she was invited to church by another teen and she accepted Christ. After school, she began to pray for a Christian husband and three months later she met Jairosse and later married him. She has asked for prayer for her family, that they might come to know Christ.

Praise God for the faithfulness of Jairosse and Esperanca. Pray for them as they finish Bible college, that God would guide them to a church to pastor, and that their families would come to know Jesus.