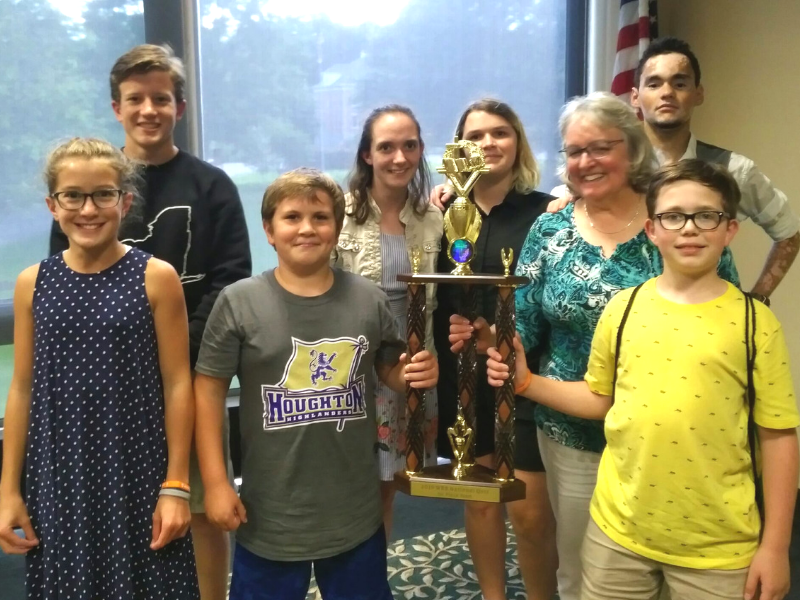 The National Wesleyan Bible Bowl Tournament was held at Houghton College this year, and Cypress Wesleyan Church won the WBB championship for a third-straight year.

“Believe” was the theme of the 2019 National Wesleyan Bible Bowl (WBB) Tournament. At the opening rally, I shared that believing, more than accepting something to be true or memorizing a bunch of verses, is a way of life, allowing the Scripture we study to impact our daily choices. It is also why the Gospel of John was written. As John 20:31 explains, “But these are written that you may believe that Jesus is the Messiah, the Son of God, and that by believing you may have life in his name.”

For the past year, WBB teams from across the nation have been studying the book of John, memorizing verses, learning stories and diving into its theology. Leaders hope that this study will be more than just preparation for a tournament but a life-changing study that will impact them for the rest of their lives.

This year, teens from Wesleyan churches in Ohio, Pennsylvania, Indiana and Oklahoma gathered on the campus of Houghton College in Houghton, New York. Competitions included individual and team events, working through two days of preliminary competitions, followed by a day of finals based on seeding from the prelims.

Similar to last year, the Milton team went undefeated throughout the tournament until the final quiz, when the third-seeded team from Cypress was able to defeat them in a high-scoring final match. The team from Sweetser Wesleyan (Sweetser, Indiana) finished third for the event.

Members of the Cypress team included Christian Butt, Lacie Gano, Tony Gano, Joe Mattiaccy, Andrea Munroe, Joseph Phillips and Sarah Phillips. Each quizzer will receive a $1,100 scholarship to the Wesleyan college or university of their choice.

In the “toss-up” category, Simon Brainerd from Sweetser took top honors in his first year of quizzing. Second went to Joseph Phillips (Cypress), with a tie for third between Grace Deitrick (Milton) and Elijah Brainerd, Simon’s older brother.

In the “written” competition, Katherine Reed of Milton took top honors, correctly answering 96 percent of the questions. She was followed by Andrea Munroe (Cypress) and Simon Brainerd. Additionally, Katherine and Andrea, both seniors headed to Indiana Wesleyan University this fall, received the WBB Character Award, having been nominated by their coaches in recognition of embodying the purpose of Bible quizzing through their lives.

Another key part of Bible quizzing, beyond discipleship and competition, is fellowship. Each year, our WBB tournament also includes an intentional event to help our teens get to know each other. In recognition of our Houghton location, this year we enjoyed the Highlander Games, organized by former quizzer and present coach, Nate Crawford.

“The games allowed students to get to know each other on a deeper level, work together and have a reprieve from the stress of quizzing in a fun and unique way,” said Crawford. “We tried to be intentional about empowering quizzers to connect with other quizzers, coaches and parents from across the nation to help build lasting relationships.”

Though the national tournament has just ended, teams are already looking to next year when they move back to the epistles, studying Hebrews and 1 & 2 Peter.

Through it all, Wesleyan Bible Bowl is committed to discipleship, fellowship and healthy competition: engaging the spirits, hearts and minds of students in a way that will enable lifelong growth through the study of the Word of God.

To learn more about Wesleyan Bible Bowl, contact me: jim.terwilliger@mcslions.org.

Jim Terwilliger is the national director of Wesleyan Bible Bowl.