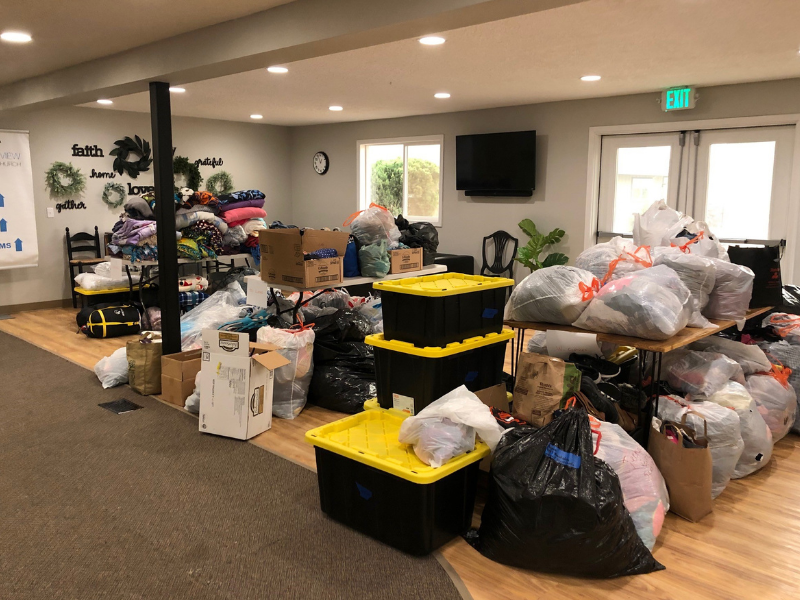 Congregants at Mountain View Wesleyan Church have found a way to serve those most devastated by one of the state's wildfires.

This year, churches in every community have been forced to reimagine how to be a faithful presence in their ZIP codes.

“COVID-19 has pressed our churches to focus on how we do discipleship 168 hours per week, when our congregation is away from our building,” said Rev. Mike Cline.

For Cline, the pastor of Mountain View Church (MVC) in Aumsville, Oregon, the pandemic is only the beginning of this year’s challenges. Within the state of Oregon, over 35 wildfires have ravaged thousands of miles of land. Hundreds of thousands have been displaced, forced to flee their homes, uncertain if any of their property will withstand the devastation. The Beachie Creek fire — among Oregon’s most severe blazes — brought devastation within 15 miles of MVC. Only three weeks after regathering for in-person services, MVC’s congregants were forced to carry the gospel into a community faced with both a pandemic and a natural disaster.

“We wanted to help, and were thinking about how we could get involved,” said Cline. “Then, on Monday September 7, we had hurricane-force winds that spread the fire wildly. On Tuesday, the mayor called to ask if our church would be a central location to collect supplies.”

Within one day, Cline’s church building had been converted into an intake center, with volunteers collecting crucial goods to distribute to those evacuating their homes. About 20 percent of the collection volunteers were from MVC’s congregation, while the rest were volunteers unaffiliated with the church.

Within hours, the Red Cross and the United Way were utilizing MVC for volunteers and supplies in their efforts to aid locations most hurt by the fire. A few hours after, evacuees started arriving at the church. Suddenly, MVC was both an intake center and a distribution hub for supplies. Cline and his team quickly converted the small church building again, with one half dedicated to intake, and the other half caring for distribution. Around 100 volunteers came together to help, as an effort of “neighbor helping neighbor,” Cline said. “We all see the devastation, and we’re just doing our best to help out.”

Soon after MVC was converted to a supply site, John Lyon, CEO of World Hope International (WHI), called Cline to see if the church would receive and distribute items through WHI’s disaster-relief partnership with Amazon. Cline accepted the assignment and sent a long a list of supplies to Lyon — mattresses, phone chargers, baby formula, diapers, kitchen items and other items vital for those rebuilding after the fire. After the list was compiled, WHI forwarded it to Amazon. Within two days, Cline received a shipping manifest indicating Amazon was donating $36,000 of the supplies requested.

With these supplies on their way to Oregon, MVC’s volunteers will focus their efforts on the long work of rebuilding. Although the church is no longer a collection center, the congregation is pressing into newly-forged partnerships with relief organizations in their community, especially those like Santiam Service Integration Team, which specializes in long-term assistance in local communities.

Though life in their congregation looks different than it did a year ago, Cline said he sees new opportunities for people to see the gospel as good news for real, practical needs.

“Often we think of the church as just relegated to serving spiritual needs,” said Cline. “Our way of serving these days is helping people see that the church can meet real-world problems and that everything is spiritual.”

Even as supplies are distributed and meals are shared, the conversations happening around the Aumsville community have helped people who rejected church reexamine their posture toward communities of faith.

“There are people we’re working with who are openly agnostic, or who have been hurt by the church, who are taking another look at how God works in a community to solve real-world problems,” Cline said.

As a final word of encouragement to those leading in the pandemic, Cline thinks it’s important to “reimagine our ways of relating to our community, so the Gospel is truly good news to the people hurting in our cities.” In recent days, Cline has received messages from at least three different people in the community who have been serving alongside MVC in its efforts. Those folks are interested in coming to the church for services once everything settles down.

And he offers this word from 1 Corinthians 16: “I think of Paul reminding the church in Corinth he’s excited to come see them, and he tells them he wants to stay awhile, because there’s great opportunity, and there’s also great opposition. When God gives you an opportunity, there will be obstacles — from our spiritual enemy, of course, but in general. These are moments that press out whatever is already in you and make you take a good look.”

Cline requests prayer for those affected by the fires on the West Coast. For more information on relief efforts, visit World Hope International or Santiam Service Integration Team.