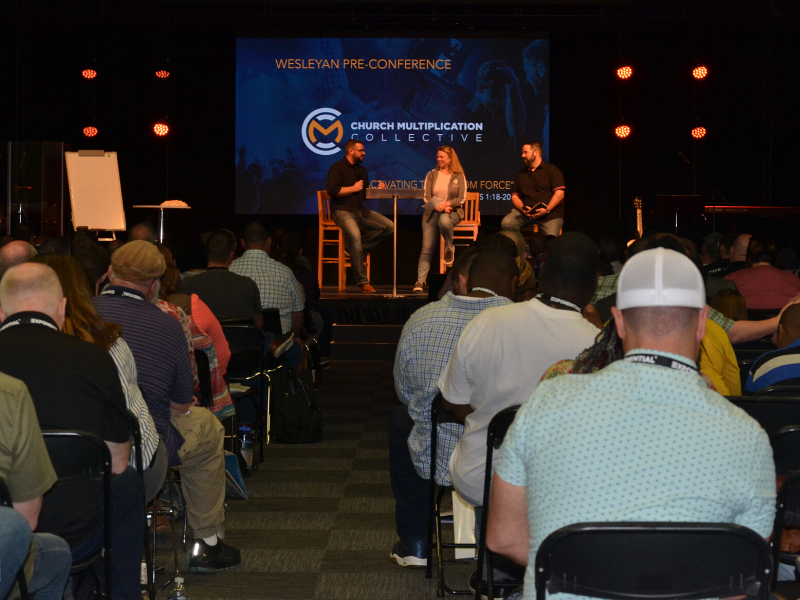 The Wesleyan Church had over 500 lay and clergy multipliers in participation who worked together to freshly imagine ways to care for their communities.

Every church is called to faithfully embody the gospel in their communities. But that faithfulness requires ever-changing methods, as clergy and laity cultivate fresh expressions of church that serve their neighborhoods, workplaces and cities.

During Exponential 2020, held March 2-5 in Orlando, Florida, The Wesleyan Church had over 500 lay and clergy multipliers in participation who worked together to freshly imagine ways to care for their communities. Among those present were Rev. Mick Veach, pastor of Kentwood Community Church (KCC) in Kentwood, Michigan, and Rev. Santes Beatty, campus pastor of Mosaic Midtown Church in Detroit, Michigan.

Veach founded Mosaic in 2015. During his tenure as senior pastor, Mosaic cultivated a multiethnic leadership team that intentionally worked to listen to their neighbors, understand core needs and respond in the name of Jesus.

“Having served internationally, I’ve experienced what it’s like coming in from the outside,” Veach reflects. “Learning culture was important, and so that’s what happened in Detroit — studying culture and responding to the community and understanding different cultures and feeling the tensions you don’t understand until you’re doing it.”

Until early 2020, Veach had not considered moving away from Mosaic to Kentwood.

“My coming to Kentwood was a supernatural experience,” Veach recalls. “Chris [Conrad] and I talked about it briefly, but I didn’t think it was the right time, and so I didn’t give it another thought. But after a while, I was awakened in the middle of the night twice by the word, ‘Kentwood.’ I talked with my wife about it, and she told me to throw a fleece out and text Chris Conrad.”

So Veach sent the text, assuming KCC had already chosen their next senior pastor. Conrad replied that they had not yet chosen their pastor and connected Veach with KCC’s search team. During the process, the search team found that Veach’s approach to ministry seemed a uniquely good fit for the life of their church.

Meanwhile, Conrad and Veach started to pray about who might best lead Mosaic in Detroit. During this process, Beatty, then the director of Multiethnic Ministries at The Wesleyan Church, felt called to step into leadership at Mosaic.

“Really, this role is about creating culture, building a team and overseeing the Exponential multiethnic multiplication cohort,” Beatty said. “There will be additional resources made available centered on the Great Commission, the Great Commandment and the great collaboration that will help pastors have not just diversity but discipleship conversations in small, bite-sized portions.”

Beatty’s work within The Wesleyan Church continues to foster rich conversations around discipleship, justice and the importance of holding space for those of all ethnicities, socioeconomic backgrounds and life experiences to learn about Christ by journeying alongside one another.

Since Beatty’s transition to Mosaic and Veach’s transition to KCC, the two churches have partnered together, with each church functioning as an extension of the other. According to Veach, the two churches plan on cultivating “a network of churches that we will plant or who have similar vision,” for how God might call them to serve their neighborhoods. Already, God has raised up 72 people to be part of the vision of global, local, church and marketplace ministry. In addition to building a cohort for training and mobilizing those lay ministers, the two churches have seen a prayer movement of over 350 who gather to pray for deliverance, healing and new life in Christ around the world. “This prayer time resembles the power seen in the book of Acts,” Veach said.

Together, with around 20 people from Mosaic and KCC, Beatty and Veach spent time at Exponential dreaming, sharing and praying about what God would call them to do in taking steps toward making more disciples. The 2020 theme was “Together,” inviting churches to partner together for the good of their communities. The Wesleyan cohort that attended Exponential came away believing more deeply in the importance of seeing church “not just be a come and see, but a go and be,” Beatty said.

“We want 100 percent of those in our communities living out their calling — some of those will be serving in the local church, and many of them will be out in their jobs doing different things.”

This vision of church, Beatty said, will call for the church to be nimble and responsive in nourishing people’s callings. For those skeptical of their ability to plant a church, Beatty said, “People in our church and movement are creating smaller communities where people can get to know Jesus and get to know each other and live on-mission together. [Our church is helping create] that process of discipleship and unleashing them to do what they sense God has called them to do — not to box them in but to create different resources so they can do that well.”

“This partnership between Mosaic and KCC is indicative of The Wesleyan Church’s ongoing commitment to helping cultivate a supportive ecosystem so new faith communities can be initiated,” said Dr. Ed Love, director of the Church Multiplication Collective within The Wesleyan Church. “It is exciting to know that Mosaic and KCC are collaborating with the purpose of sending out even more workers for the Lord’s harvest.”

For more information on how The Wesleyan Church is cultivating discipling presences in every ZIP code, visit wesleyan.org/multiplication.