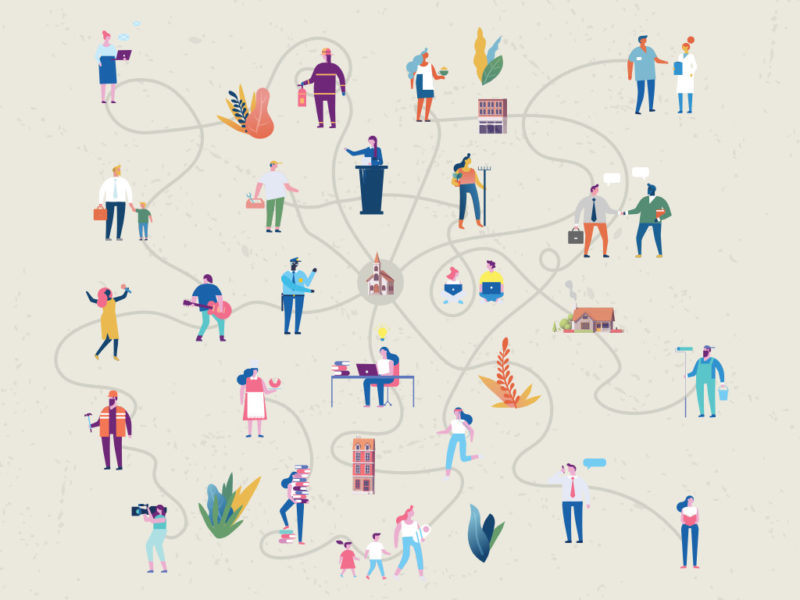 Born from the example set forward by Jesus in Luke 10 of sending 72 ahead of him to every town and place he went, Project 72 was a short-term research and development project focused on developing pioneer leaders as they fill the gap between culture

As North America and beyond transitions to a post-Christian society, and as a global pandemic has shattered church attendance across the world in the last year, church planting and growth have dwindled. As a result, new methods of multiplication, discipleship and missions are being enacted to “rediscover the mandate of the Great Commission to go and make disciples.”

Such was the goal of Project 72, an initiative spearheaded by Ed Love, director of multiplication with Church Multiplication and Discipleship of The Wesleyan Church and Jon Wiest, executive director of Groundswell, a global ministry that specializes in mobilizing disciple makers and pioneer leaders.

Born from the example set forward by Jesus in Luke 10 of sending 72 ahead of him to every town and place he went, Project 72 was a short-term research and development project focused on developing pioneer leaders as they fill the gap between culture and church.

“Every revival, awakening and multiplication movement of the past had pioneer leaders,” Love said. “A pioneer is one who is the first to open or prepare a way, settlement or region — giving others the opportunity to occupy and develop. I believe God is orchestrating a growing wave of pioneer leaders and missionary-minded disciples who are willing to launch hundreds and thousands of new pioneer projects that carry the gospel message into creative spaces filled with people far from God.”

In the last year, Project 72 recruited 72 pioneer leaders, ranging from clergy, laity, outreach leaders, micro-church pastors and others, from 30 churches and connected those pioneers together for connection, training and development.

“Pioneers are a critical group of people that stand in the gap between disciple makers and church planters,” Wiest said. “They are ‘missionary disciples called to engage and serve a group of people uncomfortable or unfamiliar with the established church.’ I believe they are the linchpin for unlocking a new paradigm of ministry focused less on professional clergy and more on the priesthood of all believers.

“The body of Christ is not simply sheep to be shepherded but an army to be mobilized. If disciple makers are the foot soldiers of that army, pioneer leaders are the special ops and Project 72 was launched as an initiative to learn from pioneers and begin a new conversation around mobilizing this special group of people,” said Wiest.

One such pioneer leader is Laura Williams, founder of Jericho Outreach Ministry, a non-profit organization designed to share the love of Jesus to women in the adult entertainment industry.

Williams, who lives in Des Moines, Iowa, first felt called to connect with these women in 2013 and began frequently visiting strip clubs to develop relationships with them.

“[When I first started going], I could see faces of dancers that were coming in and out and customers coming in and out, and that made it more personal,” Williams said. “It’s one thing when you think about the industry, but it’s another when you can put a personal face to it … There’s a reason behind every behavior. When you’re watching an 80-year-old man hunched over with a cane walking into a strip club, what’s the story there? When you see a woman who looks very young and is coming out and wiping her eyes like she’s crying, what’s the story there? Get to know the person so you can know the reason.”

Through Project 72, Williams was able to share her ministry experience with other pioneer leaders across the United States and learn from others in her cohort.

Williams said, “Project 72 was a grassroots strategy of creating disciples to make disciples – discipling disciples to disciple others. It helped us encourage each other to find our gift, find our ministry, find our message and talk with each other within our own group and several different groups about ways that we can disciple and ways that we are working to reach people that would never come inside a church probably.”

Since launching Jericho Outreach Ministry, Williams and a team of volunteers have helped women get out of strip clubs, rescued some from sex trafficking and personally baptized two women who have given their lives to Christ. Williams noted that “we help them find value in themselves and they make the decision to leave. From there, we work to help them find living-wage jobs and/or begin school or training.” (Rescuing them includes helping them escape traffickers, finding temporary housing and getting into recovery programs.)

“These women are great,” Williams said. “They call us the ‘church ladies.’ It’s been amazing to watch God work.” Some of the former dancers and trafficking victims are now attending a weekly Bible study too.

Love and Wiest believe that people like Williams are the key to entering places otherwise unoccupied by the church.

“It is my conviction that congregations everywhere are filled with an untapped Kingdom Force waiting to be released into God’s mission on earth,” Love said. “These pioneer leaders simply need permission, encouragement and trailblazing coaches to guide them into the new frontier. We also believe some of these pioneer leaders could be future church planters.”

Like Williams, many other laypeople have started or are involved in ministries that reach marginalized communities. Project 72 was an initial effort to equip these people and network with other pioneer leaders to further Unleash a Kingdom Force.

“So many times, churches pray over missionaries who are getting ready to go overseas, and we send them on their way with prayer and financial support. But what about the guy who is a plumber and is reaching people within his work? Do we think about him the same way? Probably not, but we should,” Williams said.

“And so, I think just helping people realize, within their own community, different avenues or different ideas of how to reach people, you don’t have to be called as a missionary, we’re all coming out to the world. But loving your neighbor is the person living right next door to you. How can you do that? Loving your neighbor is the person you work with. How can you do that? It’s really about building relationships. So, exploring ideas within your own community of how to build relationships I think is what being a pioneer is really about.”

As The Wesleyan Church continues to work in multiplication, sharing the transformative love of Christ across communities, the lessons learned from Project 72 will undergird future efforts to mobilize more pioneers.

For more information on pioneering, read “Pioneers – raising up missionary disciples for the new frontier,” a book written by Wiest and Love or visit www.groundswellmovement.net.