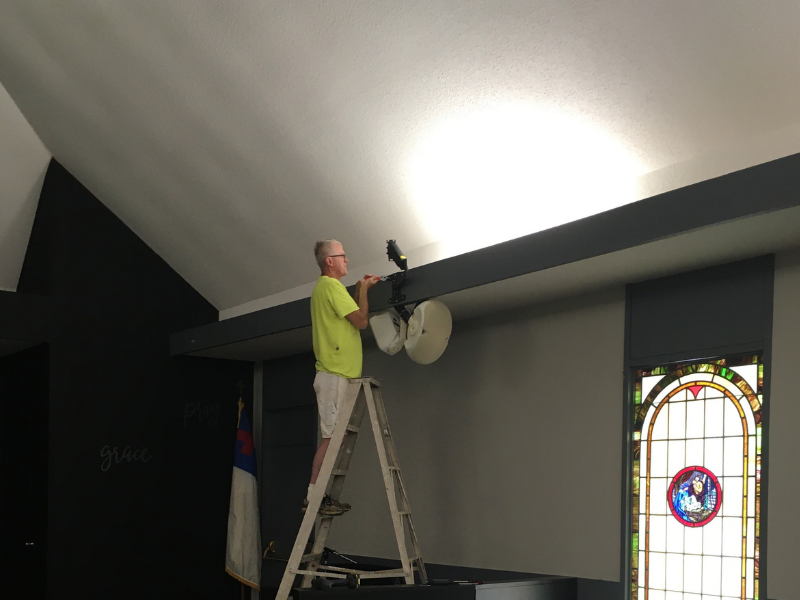 Couple embarks on a church transformation with God’s perfect timing.

If you watch DIY shows such as “Fixer Upper,” “Maine Cabin Masters” or “Home Town,” you know that designers often see what viewers cannot until the “big reveal” during the last 10 minutes of the show.

Sometimes God allows pieces of the puzzle to fall into place before revealing the whole picture, just like he did in the lives of Reverends George and Mary Brassard, co-pastors who are reimagining and transforming Community Wesleyan Church (CWC) in Iva, South Carolina.

The Brassards were married in 2001. At the time, Mary was unfamiliar with The Wesleyan Church, and said, “I wasn’t really sure what I was getting into.” In 2005, George was called to become a pastor. A year later, Mary attended a conference with Wesleyan spouses and felt the Lord tugging her heart.

Thus started a nine-year period of taking correspondence courses and FLAME classes on her way to becoming an ordained minister.

“I had several opportunities to pastor other churches during those nine years, but we knew it was not God’s timing.”

Mary has worked as a bank teller for 22 years, living and working outside of Iva. But in 2018, her job was transferred to the only bank in Iva, allowing her to meet more people locally.

“This allowed me to get to know the people in our little town. Although I have lived in the vicinity of Iva for 15 years, I commuted over 20 miles to work in Anderson. I simply didn’t know the people of the community I lived in.” She said she also had the privilege of praying for many people while doing her bank job.

The Brassards decided to purchase property in Iva for their retirement. They moved in March 2019, praying that God would give them an opportunity to pastor somewhere. Three months later, the pastor at CWC announced he would be retiring in September. The South Carolina District asked the Brassards to lead CWC not knowing they had made a home four miles from the church.

The tale of Community is a familiar one — a small town church with a bright future that built a new sanctuary and fellowship hall and gym just before reaching its peak in the early 90s. The church was happy to continue as it had for decades without changings its traditional service or surroundings. A slow and steady — some may even say unnoticeable — decline occurred over the next two decades.

The dedicated followers of CWC still attended Sunday night and Wednesday night services and offered men’s and women’s groups and Sunday school. But after a local textile mill closed in the early 2000s, this small rural community dwindled to about 1,200 residents as the younger generation moved elsewhere.

When George and Mary took over as co-pastors last year, the church consisted of 12 senior citizens who faithfully endured the decline. The church needed basic structural renovations, not to mention some upgrades and updates. One of the first things the Brassards did was establish a children’s ministry. They then obtained the complete support of the congregation to change the worship service style to reflect “today’s cultural norms,” according to Mary.

“In addition to modernizing the sanctuary, the congregation was willing to get rid of the pews and hymnals and to see the church revitalize and continue to become healthy for years to come. For this, they are to be commended greatly for their sacrifices.”

Because of COVID-19, CWC installed Wi-Fi and new TV monitors and are livestreaming their services on Facebook. They also established a church website and can receive online donations. CWC is now reaching 90 viewers on average each week.

For Thanksgiving, CWC provided meals and outreach to a family living in an abandoned house without water or power. And it helps with other local organizations, such as Meals on Wheels. It also plans on passing out flyers and offering hot cocoa and cookies again this Christmas during the Iva Christmas parade. These types of outreaches led to a single mother with two pre-teens adopting CWC as her church family.

CWC’s story is one of individuals’ faithfulness and obedience to God, as well as God’s grace to CWC. Iva is being blessed by the encouraging and growing presence of “its” Community church.

Jennifer Jones is the district administrator for the South Carolina District.

Pictured: Rev. George Brassard works to update the lighting in the church.