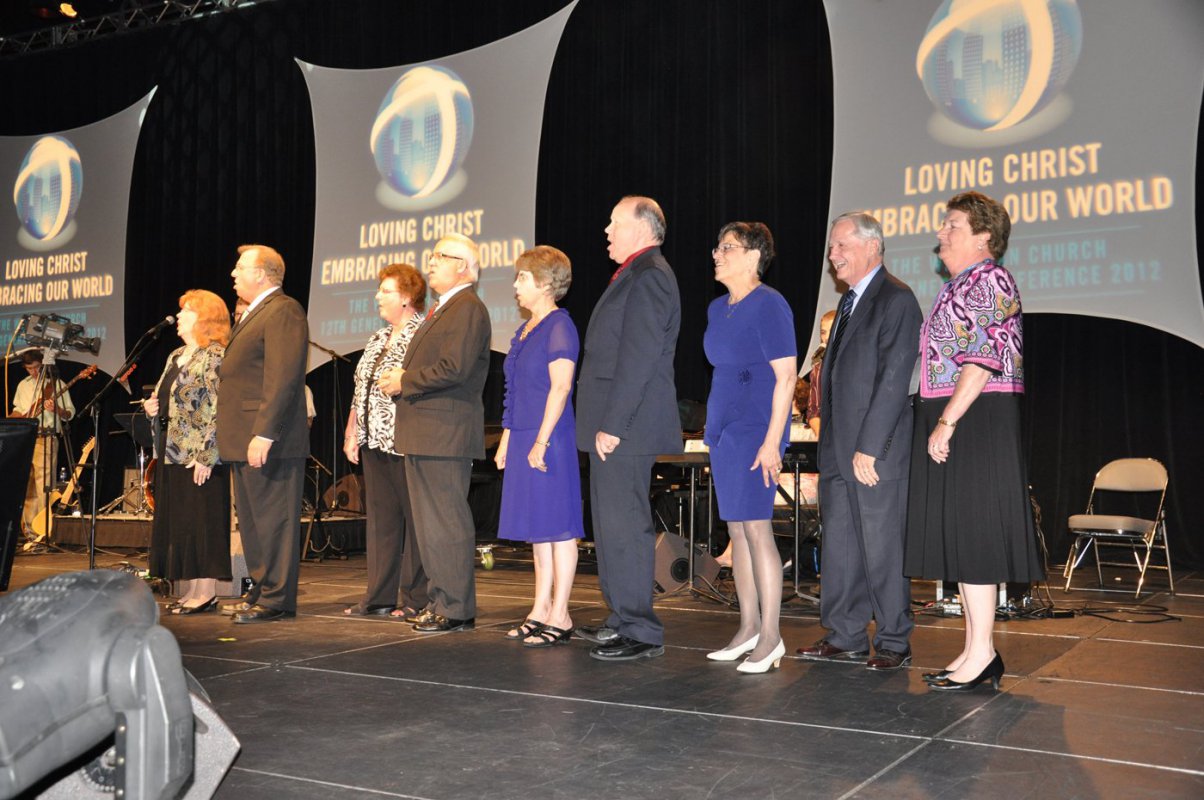 Newly elected General Superintendent, Dr. Jo Anne Lyon, honored five general officers of The Wesleyan Church who will retire or transition to new roles at the rise of General Conference 2012.

Newly elected General Superintendent, Dr. Jo Anne Lyon, invited five general officers of The Wesleyan Church who will retire or transition to new roles at the rise of General Conference 2012.

In characteristic fashion, Dr. Lyon recalled incidents in each of their lives which gave an indication of why they rose to leadership in the Church.

To Mrs. Blackburn, she said the word “transition” characterized her. Recalling how the retiring General Director of Wesleyan Women experienced faced many transitions, including the death of her husband Rev. Bob Murphy—and her establishing a home and providing for her children after his death; her marriage to Dr. Jim Blackburn; and her move to leadership with the department of Wesleyan Women.

Dr. Ronald D. Kelly, the General Superintendent said, reminded her of the word “faithful.” Recalling his faithfulness in the varied duties as General Secretary, she remarked at the faithful way he faced the challenges of his pastoral, district, and General Church leadership—including planning General Church events.

General Director of the department of Education and the Ministry, Dr. Kerry D. Kind, was described as a “servant-leader.” Dr. Lyon recalled how Kind had developed a Bible college in Sierra Leone, Africa as a missionary there, and then exchanged roles with the Sierra Leoneon leader that he had mentored.  Kind will have the opportunity to continue serving and leading as editor of Wesleyan Life and director of communications at headquarters.

Dr. Lyon said her colleague on the Board of General Superintendents, Dr. Jerry G. Pence, is characterized by the word “transformation.” Noting that the word was often quoted in the motivational and developmental writings of Pence and that he assisted the Church in transforming its church planting efforts, and finally as he has taken the assignment of transformational ministries as senior pastor of Brooksville Wesleyan Church in Brooksville, Florida.

Telling of Global Partners’ General Director Dr. H. C. Wilson’s use of the words “bold with grace,” and seeing it displayed in various global leadership settings, General Superintendent Lyon said his leadership epitomized the words. She concluded the ceremony by leading the Conference in applause for the general officers that were making their career transitions.