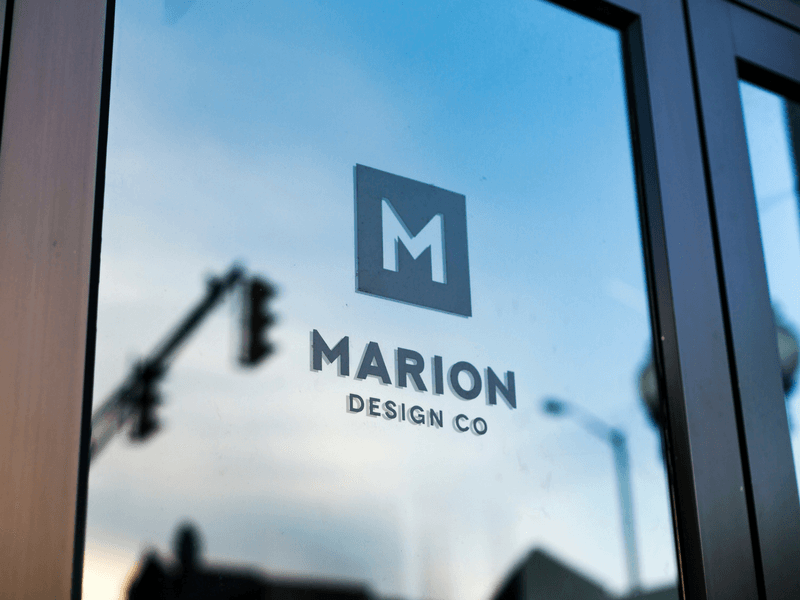 Those who are a part of Marion Design Co. are helping to revive, empower and propel Marion, Indiana, to a brighter future.

“And work for the peace and prosperity of the city where I sent you into exile. Pray to the Lord for it, for its welfare will determine your welfare” Jeremiah 29:7 (NLT).

A fascinating story has been unfolding over the last few years – a story full of hope.

In 2015, one IWU design student who enrolled in a typography class with Peterson also took a journalism class to fulfill an English credit. A journalism class assignment connected the student to the Marion mayor who shared a desire to re-brand the city but had virtually no resources. The student relayed the city’s need to Peterson, who knew IWU could help.

Word spread around IWU about the “re-brand Marion” project. Seventeen IWU students refused to go home during the summer of 2016. They felt called to stay and help. They wanted to use their talents to make a difference in their community.

Puffer said, “We [Art + Design faculty] had a meeting in my living room. We explained that we could not pay them. We told them that we understood the importance of making money during the summer months. We prayed as a group about what the Lord would have us do; not one student backed out.”

Peterson began searching for studio space where their team could work. Their number one desire was to be located in the heart of Marion. Through remarkable circumstances, less than a week after his first inquiry, Peterson was holding a freshly cut key to a vacant downtown bank building the team could use for free throughout the summer.

The space had the exact number of tables and chairs needed for the team. Grant County (the bank building’s owner) covered utilities and maintenance. The IWU faculty, in addition to the students, worked for free.

“This [building] became a hub for an incredible, immersive learning experience for 17 students and four faculty,” said Peterson. “We became a ‘thing’ that needed a name. Someone mentioned the name ‘Marion Design Co.’ and that was that.

“Marion Design Co. was a project grown by faith,” Peterson said. “God was at work because things that are not humanly possible were happening every day. We finished each day that summer saying, ‘What a day!’ We were living it together. Our faith was stretched. Our students’ faith was stretched. We were learning alongside one another.”

The team describes some difficult days in the bank. The branding research was not easy. People attending design thinking sessions shared heavy burdens and concerns for Marion; stories of racism, poverty and unemployment that spanned generations. When days were especially challenging, the team retreated into the huge bank vault to read Scripture and pray. There were also days and times, however, when the team would be encouraged as it received positive information and discovered many community strengths.

The bank became a sacred space, a neutral ground. In time, as the students and faculty listened and talked to community members, Marion Design Co. became city representatives.

The result was something none of them could have imagined—work for a lifetime. The Marion Design Co. has become a collective of marketing agents for Marion seeking to change the visual vernacular of this city. These agents are helping to revive, empower and propel Marion to a brighter future.

Marion Design Co. team members are serving on boards and committees and working on multiple, large-scale projects. They are re-branding storefronts, re-branding businesses and schools, producing radio spots, volunteering time, creating spaces for conversations and infusing hope into every place they go. They are slowly, but surely, changing perceptions.

“It is truly remarkable. I just had a student tell me that he wanted to apply for a summer internship position with Marion Design Co. for this coming summer,” explains Anspach. “Just two years ago, all of this was just an idea.”

Anspach describes his joy in being a part of marrying design with passionate, creative college students and putting them to work in a community where they are genuinely making a difference. As he explains, “To me, this is what it means to embody the gospel.”