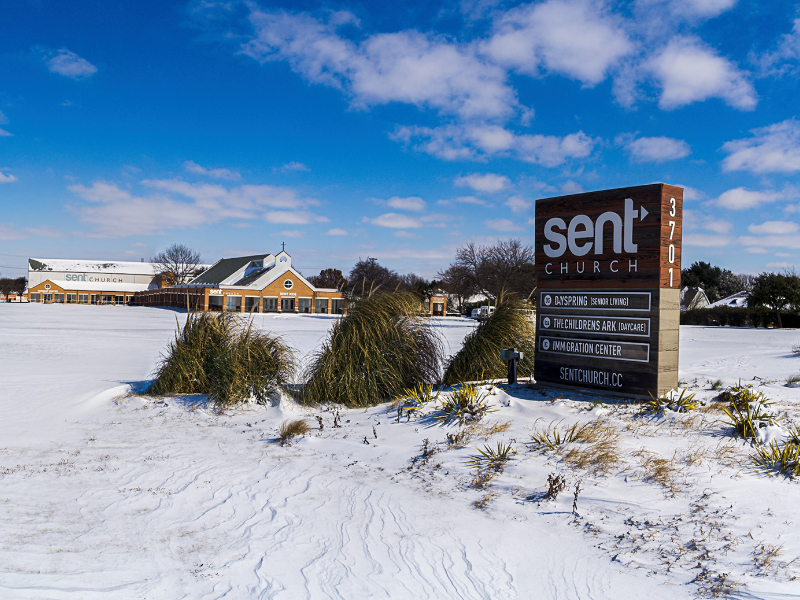 Record temperatures and snowfalls in Texas have caused dire circumstances in a state unaccustomed to extreme winter weather.

Millions of Texans are dealing with no power/heat in arctic temperatures, along with broken pipes, flooding and lack of water. Several people have lost their lives. This is the biggest “winter event” in Plano in 70 years.

Sent Church, in Plano, Texas, has stepped up to meet needs of those suffering in the Dallas area. One of the largest congregations of the Mountain Plains District has opened its facility to those who need some warmth and food, even providing “charging” capabilities for cell phones and devices. Thursday, February 18, is the third day that Sent Church has been open to the community.

“We had one family that visited the Warming Center three times over a 24-hour period,” said Rev, Kyle Ray, Sent Church senior pastor. “Their group grew each time. First, it was a set of parents with their daughter and two nieces. When they came back the second time, they brought the grandparents along. When they came back the third time, they brought an additional sibling with them. Since their power was out, they just needed a place to warm up, get some hot coffee and snacks and charge their devices. They were so grateful to have a place to come and get some relief from the cold in their home.”

Sent Church has received donations from area businesses to assist residents. Starbucks, Walmart and Bella Italia, a local restaurant, have donated food and toiletries. Members of the Sent congregation have collected coats and blankets and have delivered them to Metro Relief, an organization that works with Dallas’ homeless population. (Metro Relief was born of out Sent Church’s daughter church, Horizons Church, which was planted in 2006.)

Ray told another story of a family who has been to the church for some resources and warmth.

“We had a young family come with a 4-year-old and a 7-year-old,” said Ray. “The kids loved watching movies that we had going on the TV during their stay. During a conversation with the dad, he shared with me that he wanted to bless the church with a financial gift. He said, ‘We are not in poverty. We both work. We just don’t have power right now, so it was great to have a place to come in order to get some relief.’ He and his wife ended up making a donation to our church’s benevolence fund out of appreciation for our service to the community.”

One woman from the community noted that Sent Church was different than some in the area.

“A woman came into the Warming Center and said, ‘My boyfriend is out in the car. I just wanted to come in and see if this was real. We visited several other churches that were closed. There were cars in the parking lot, but the doors were locked.’” (Their apartment didn’t have power.)

Seven years ago, in 2014, Sent Church changed its name (the church’s former name was Collin Creek Community Church) to reflect its mission to the community and to the world. The church’s name is based from several scripture verses, including John 20:21: “Peace be with you! As the Father has sent me, I am sending you.” Congregants are encouraged to “Live Sent” every day in their spheres of influence.

“The phrase ‘Live Sent’ is a commissioning of our people to the world,” said Lauren Nash, communication director at Sent. “It’s our privilege to be a missionary for Jesus, whether we have to cross an ocean or an alley to tell/show someone of his love and forgiveness.”