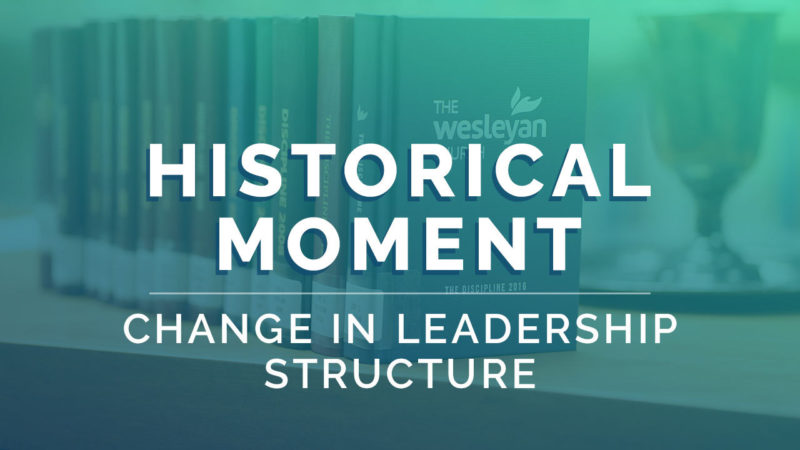 The move to a single General Superintendent

Looking back at a key structural change as we approach the 14th General Conference.

When Wesleyans gather at the 14th General Conference, they will do so with a leadership model of one General Superintendent, five general officers and a 24-member General Board. That model looked differently 64 years ago.

The first General Conference of The Wesleyan Church (TWC) occurred in 1968 when the Pilgrim Holiness Church and the Wesleyan Methodist Church merged. The decision was made to elect four General Superintendents (GSs), “Generals,” giving each previous denomination two representatives to lead the newly created TWC denomination. The system of having four GSs continued for 24 years until TWC elected to be led by three GSs in 1992 upon the retirement of GS O. D. Emery.

In 2008, the longest serving GS in TWC history, Dr. Earle L. Wilson, decided to retire after 24 years in office. His successor became the first woman to ever hold this title, Dr. Jo Anne Lyon, founder of World Hope International. She and the other two GSs, Dr. Jerry Pence and Dr. Tom Armiger, served together. During the 2008–2012 quadrennium, TWC studied its leadership structure.

For 18 months, Wesleyan pastors and lay leaders were consulted, and forums were held across Canada and the U.S. A subsequent white paper was produced offering four leadership models. The model in place today was the one chosen — the model of having one General Superintendent.

Dr. Lyon explained, “The model of one GS and an executive cabinet was to give clear denominational vision, flatten the organization and strengthen district and local church leadership.”

At the 2012 General Conference, Dr. Lyon became the sole GS to lead The Wesleyan Church. “With the election of Jo Anne Lyon to that post, the church gave ample evidence that its historic support for women in leadership in the church applied not only on a local or district level but on the denominational level as well,” said Dr. Bob Black, TWC historian and retired Southern Wesleyan University professor.

Dr. Lyon would serve in this role for the next four years until retiring in 2016 and claiming another first — being named the first “Ambassador” of TWC. Sitting General Superintendent Dr. Wayne Schmidt was elected in 2016.

Ten years after moving to the one General Superintendent model, some Wesleyans believe the restructuring had a broader impact.

TWC Historian and retired Church History Professor Dr. Bud Bence said, “The restructuring that started with reducing the number of GSs, and has persisted with creating mega-districts, is significant.” Dr. Bence believes it is too early to tell whether these were the right decisions. “The creation of mega-districts will have far more of an impact than changing the number of GSs,” he said, because he believes the denomination might become more regional in its expressions. “We must remain unified in our mission, while allowing for a variety of perspectives on what it means to be ‘Wesleyan.’”

This opinion was echoed by former GS Armiger who said going with a solo GS was coupled with department streamlining that eventually has led to the restructuring and merger of some districts. “Whether or not restructuring has proved to be advantageous for The Wesleyan Church, it is for the General Conference to debate and decide. It is imperative, however, for General Conference to ensure that denominational underpinnings are solid, identity is maintained and allegiance is affirmed.”