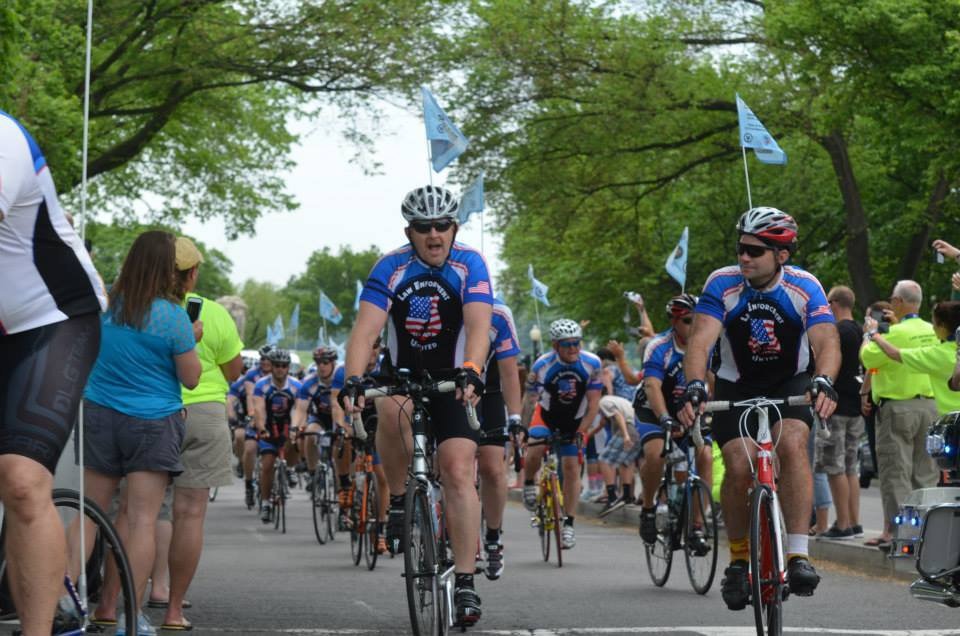 He has pedaled 4,000 ministry miles on his bicycle in eight years. Rev. Dr. Sam Frye, a church planting pastor in Williamsburg, Virginia, has a unique ministry outside the walls of the church.

Rev. Dr. Sam Frye, certified police officer and founding pastor of First Simple Church Williamsburg in Virginia, has learned how a new church plant can naturally introduce those in the community to Jesus.

“It’s the willingness, investment, and desire to get outside the walls and meet people where they are,” Pastor Sam said. “We can’t expect to open church doors and simply expect people to come. It takes getting out of your comfort zone and taking Jesus’ example and applying it to today’s world.”

Pastor Sam understands this concept well. For the past eight years, he has ridden his bicycle with a group of over 300 from Chesapeake, V.A., to Washington, D.C., during the annual National Police Week event, “Road to Hope.” Presented by Law Enforcement United (LEU), participants bike 250+ miles in three days, stopping at various memorial sites where officers were killed in the line of duty. During their stops, they minister to the families of police departments and fallen officers.

Pastor Sam has taken the meaning of LEU’s “Road to Hope” to a different level by being a pastor, chaplain, confidant, and lending ear. He not only prays at the stops and communicates the gospel, but he also listens to officers enduring the ride’s physical demands and those still struggling with a line of duty death within a department, especially those of young officers.

Why, then, does he ride every year instead of going as a support team member? Pastor Sam’s answer is simple. “If you meet people where they are, you earn their trust quicker. Experiencing and sharing the physical hurt and sometimes the inherent exhaustion from the three-day, hilly ride demonstrates the same love Christ displayed,” he said. “It’s the same reason I went through the police academy. If people know you’re willing to sacrifice for them and that you understand the issues of “the job,” it breaks down the inherent barriers.”

Pastor Sam has ridden a near total of 4,000 miles, including a ride from Charleston, S.C., to Washington, D.C. During each ride, he has talked to many officers and departments about Jesus, with three officers accepting Christ and getting baptized along the route. He has conducted pre-marital counseling, weddings, and, sadly, funerals for several. In the last four years alone, LEU has lost four of their own in line of duty deaths.

The journey exemplifies how the interaction and connections formed help spread the love of Christ outside the church walls.Pastor Sam’s 2014 journey especially did. Every year, participants ride with a bracelet and flag for a killed officer. At the journey’s end, they have the opportunity to meet the surviving family at the National Law Enforcement Officers Memorial. This year, Pastor Sam carried the memorial bracelet for an Arkansas officer who died of a heart attack while pursuing an escaped prisoner on foot. He was disappointed when he was not able to meet the family of this fallen officer. But God works in mysterious ways.Soon after returning home from D.C., a reporter from Arkansas called him after he saw Pastor Sam’s post to the family on the Officer Down Memorial Page (ODMP) website. He asked if Pastor Sam would discuss why he rides for fallen officers every year, to which he agreed.

After the interview, the reporter gave him the phone number of the Arkansas department’s chief where the fallen officer had served. Pastor Sam talked to the chief, who graciously gave him the widow’s phone number. He called and left a message. Amazingly, she returned his call to inform him that they planned to lay a wreath at the police memorial for her husband (9W, line 27). She wanted to share the event with him and express just how much it meant that her husband would never be forgotten. At the event, Pastor Sam shared his ministry background with her, which quickly became a meaningful conversation between them. According to Pastor Sam, the conversation was special because she talked about her relationship with Jesus. It was this faith that got her through the tough times and gave the assurance that she would see her husband again someday in heaven.

“Isn’t it just like the Lord?” said Pastor Sam. “When we go to bless someone, we are the ones who wind up getting blessed!” He notes that all rallies and events where people need to hear about Jesus, like Relay for Life, Wounded Warriors, and even sporting events, produce ways to take a church plant to the community.

How long will he support this annual police outreach and ministry? While he is the oldest rider on the tour at 58 years, Pastor Sam will continue as long as the Lord gives him the legs and health to ride numerous miles and tackle many hills. “Christ never complained about all the walking he did. At least I have a bicycle,” he said, grinning.

To learn more about LEU and Road to Hope, visit here.