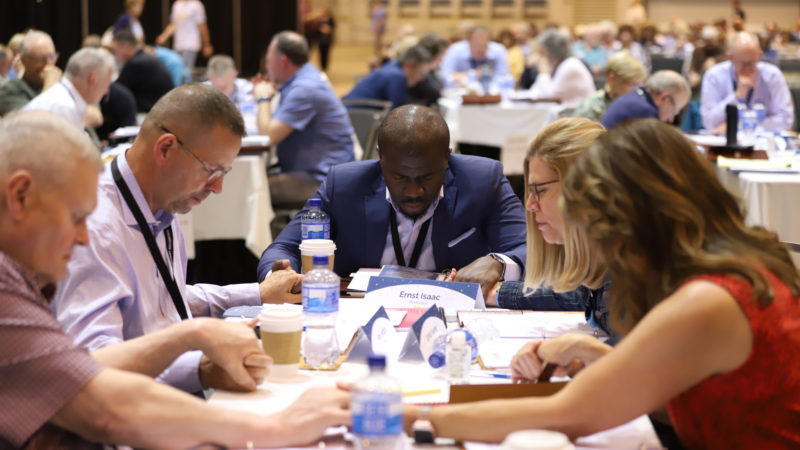 The second day of General Conference began as the first … with prayer. How else would Wesleyans begin kingdom work? Wesleyans are a people of prayer.Following the opening prayer, Wesleyan Investment Foundation’s (WIF) Chief Executive Officer Craig Dunn took the floor. Dunn expressed his thanks and appreciation for The Wesleyan Church and their partnership with WIF over the years. He then announced the beginning of WIF’s leadership transition where upon his retirement in three years, Norwood Davis would assume full duties as WIF’s CEO. At the conclusion of this announcement, General Superintendent Wayne Schmidt laid hands on Dunn and Davis, praying for them and the transition to come.

General Superintendent Wayne Schmidt opened the third business session on Tuesday morning by thanking the 349 registered delegates for the gracious way they handled differing opinions in the previous business sessions over matters cared so deeply and passionately about by so many.

Tuesday then proceeded with the business at hand. Memorials began the morning and soon were set to pause until the afternoon session, allowing regional caucusing to round out the morning business. Four regional caucuses convened, with delegates discussing and voting on individuals to bring forward to the General Conference as their region’s nominations for General Board members.

After a break for lunch, the afternoon business session began with reception of regional General Board nominations. Votes were cast and elections of 24 General Board members were made. Memorial discussion then resumed.

Late Tuesday afternoon, Dr. Schmidt called the conference to read “The Statement of the General Board of the North American General Conference of The Wesleyan Church” from page 24 of the conference program, pausing to give affirmative responses to the various points contained therein. As these words were spoken, the manifest presence of the Holy Spirit filled the conference. Click here to read more.

Shortly after a time of the Spirit’s move in this affirmation, Stephen Mowat (ministerial delegate, The Great Lakes Region) stepped to the microphone, calling the General Conference to pray over the breaking news of today’s shooting in a Texas’ elementary school where 14 children and one teacher were killed. Dr. Schmidt agreed, asking Rev. Mowat to lead the conference in intercessory prayer.

As the day and the 14th General Conference began to wind down, attendees gathered once again for worship. Tuesday evening’s service was centered around listening and responding to God’s calling to be a Kingdom Force Unleashed. Click here to read more.

On Tuesday, May 24, the 14th General Conference elected 24 women and men, lay and clergy  area representatives to serve The Wesleyan Church as General Board members for the next quadrennium. A list of representatives and their respective area of service may be found here.

Memorial 857: Approval Process for Withdrawing from the Denomination: Referred to study committee.

Memorial 864: Fidelity to Doctrinal Heritage of The Wesleyan Church: Tabled.