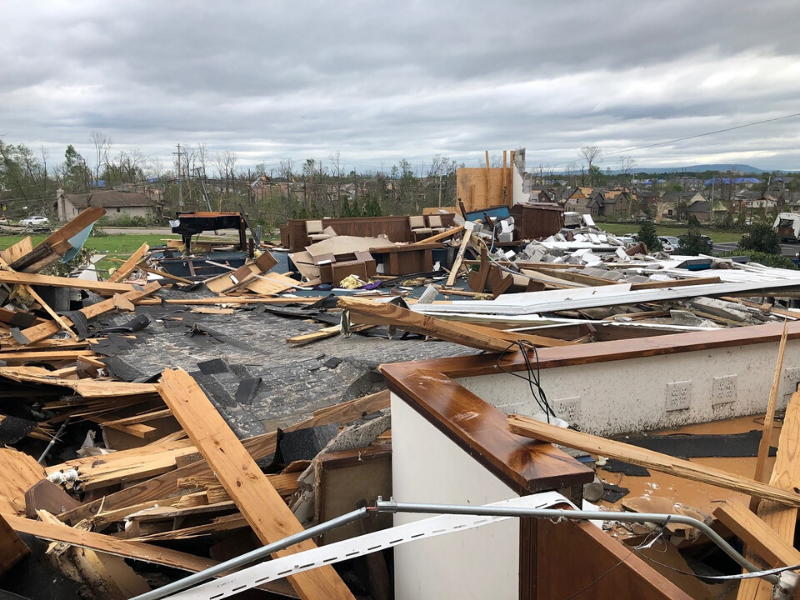 Two Wesleyan churches in the Kentucky-Tennessee district experienced devastating loss the week of Easter as storms tore through the region.

“The Salem Ridge Wesleyan Church family have poured hours of labor and thousands of dollars into fixing up their 100-year-old building that was destroyed last week,” Rev. Aaron Sherman, district superintendent of the Kentucky-Tennessee District, said. “They’re not discouraged, however; they’re energized by the fresh opportunities they are finding to minister to their neighbors and the new connections that are being formed in the community as a result of their material loss.”

Salem Ridge Wesleyan Pastor Jonathan Rogers believes this storm and the subsequent destruction of the church building are in fact an answer to a long-awaited prayer.

Rogers and many other members of the Salem Ridge congregation had committed countless hours and significant finances toward renovating and updating the church, recently installing the church’s first bathroom, septic system, concrete sidewalk and parking area, and were on their way to saving for and installing an updated heating system.

But Rogers’ end goal was to rebuild a church building even before the storm had hit.

“God gave me the vision to build a new church, and people would come. So, I ended up designing a new church, even though, here I was with a rinky-dink church building with no money, but the vision was put on the backburner because we weren’t ready for it,” he said. “But this past weekend, the Lord showed me that when I started pastoring here, I couldn’t have handled a new church building. I wasn’t ready — none of us were. So, God had to take us in steps: putting in a new septic system, modern bathroom, sidewalk.

“God has led us step by step to build our faith and to show us what he can do. And now it seems he feels like we’re at the point that we’re ready for the new church.”

Once COVID-19 mandates subside, Salem Ridge Wesleyan will convene in the parsonage, which will require minor renovations but withstood much of the storm. Rogers is using this opportunity to minister as he can, while following guidelines in place for COVID-19. However, Rogers added that he is the one being ministered to in this time, as families neighboring the church building, who do not attend Salem Ridge, have been sacrificing time, energy and even money to help salvage and clean the church.

On Easter Sunday, April 12, four days following the devastation to Brooksville and surrounding areas in Kentucky, Indiana and Ohio, another storm rolled through Chattanooga, Tennessee, demolishing Faith Community Wesleyan Church (FCWC) and much of the local community.

Suffering 145 mph winds and nine-mile-wide tornadoes, FCWC experienced total loss of the building and the fellowship building on campus. Dr. M. C. Tolbert, pastor of FCWC, described the scene as a “war zone,” noting the destruction not only of the church but the total loss of hundreds of homes and businesses in the community as well.

“I have been in touch with congregants through phone, email and text messages. I have been inundated with calls, emails and texts from friends and family,” Tolbert said. “Congregants seem to be calmed through our outreach to them. Their hearts are broken, but their faith in Jesus holds strong. Because of COVID-19, I was already reaching out to them each week with a short letter of encouragement and a sermon via email. They have been in contact with one another also.”

Tolbert indicated that as of Tuesday, April 14, he and his wife, Anna, had been unable to assist physically at the site, partially due to COVID-19 restrictions but primarily due to the level of destruction and to leave room for emergency personnel to access the sites.

“At this time, we have not been able to reach out in any physical way to assist with anything. We are in much prayer for all our neighbors. Only one church member lives in the vicinity of the destruction. She was spared any damage,” Tolbert said. “We have been encouraged by contact from our District Superintendent Aaron Sherman and fellow clergy.”

“Even in the midst of surveying the absolute destruction of their own Church and Family Life Center, Pastor M. C. and Anna Tolbert and the Faith Community Church Family are gathering supplies and needed items for the dozens of nursing home patients that were displaced when the tornadoes damaged their facility, located next to FCWC,” Sherman said. “They are finding ways to look beyond their own loss and needs and minister to the hurting and vulnerable around them.”

Sherman said that the Kentucky-Tennessee District “has been experiencing the winds of revival this past year as God has stirred [their] current churches,” and the district is “excited by the momentum and knows that God is leading [them] to bigger and brighter things ahead.

“The blow of losing two church facilities in five days has been difficult, but once again these churches are choosing to move forward instead of backing down. Our district has been blessed lately with a strong spirit of unity and renewed purpose — reaching our communities for Christ, however, whatever and wherever!” Sherman said. “These hard times have only strengthened our resolve and are galvanizing our team to move forward with greater focus and determination. Our district motto is ‘Onward and Upward’ and nothing we are facing is deterring us from moving that direction — following God’s lead to the best days still ahead!”

A Wesleyan church in South Carolina is also cleaning up after recent storms.