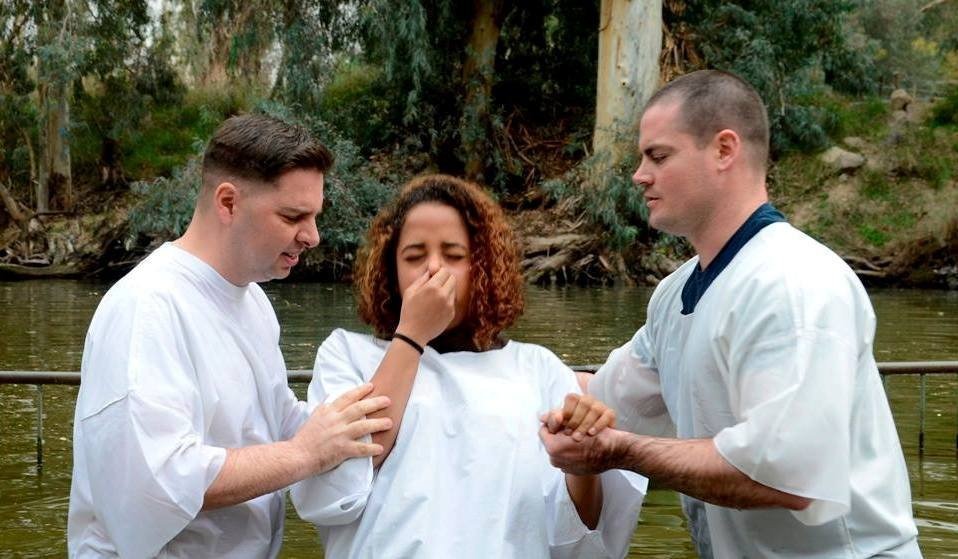 Sailors attached to the amphibious transport dock ship USS Mesa Verde (LPD 19) and marines assigned to 22nd Marine Expeditionary Unit (22nd MEU) were baptized in the Jordan River and explored the Holy sites of Israel during a scheduled port visit.

Mesa Verde organized tours for the cities of Nazareth and Jerusalem, the Sea of Galilee, the Dead Sea, and the Jordan River.

Mesa Verde’s command Chaplain, Lt. Bryan Purvis, along with Chaplain Lt. Michael Monroig, assigned to the 22nd MEU, performed 22 baptisms of both sailors and marines. Lt. Purvis is one of 34 Wesleyan chaplains who serve in the United States Army, Navy, Air Force, Civil Air Patrol, and Veterans’ Administration, among other roles. (Two Wesleyan chaplains serve in the Canadian Armed Forces.)

“It was such a humbling experience,” said Purvis (at right in above photo). “To think, this is where John the Baptist baptized Jesus, and I had the honor and privilege of baptizing so many sailors and marines.”

Sailors boarded buses at sunrise and set off for the hour-long drive to the Jordan River. “It was renewing and refreshing; it helped me realize that I have a lot to be thankful for,” said Culinary Specialist 3rd Class Caroleeta Smith. “I have come a long way but I still have a long way to go and it made me just very thankful.”

For many of the sailors and marines it was the first time they had been baptized. For others it was a rededication.

“This experience just left me in awe,” said Culinary Specialist 2nd Class Jalisa Dembo. “To be baptized where my Lord and Savior walked, talked and delivered his people was an absolutely awesome experience. It was my first time being baptized and one that I will dearly treasure for the rest of my life.”

Purvis said there were many rewarding aspects to the tour. “You had the historical aspect, the spiritual significance, but also the relationships that were built between the U.S. and Israel,” Purvis said. “If I had to pick one, as a chaplain, it would be the baptisms—the emotion from the sailors and marines as they understood the significance of what just occurred is something I will never forget.”

Through the remainder of the tour sailors and marines talked about how the baptism and the tour to Nazareth had impacted their lives.

Gary Carr, associate military endorser with Education and Clergy Development for The Wesleyan Church, shares why Wesleyan chaplains are so important in ministering to those who serve in the armed forces: “The ministry of our military chaplains represents the leading edge of a Wesleyan engagement with the community. They operate in a high-risk workplace everyday, carrying peace to the field of danger or disorder, bringing focus on God’s activity in the industrial world as well as the digital world. They define contemporary disciple-making: a vibrant faith with their message, exceptional competence in areas of military and social science, infectious optimism, as well as boundless compassion for today’s soldier, sailor, airman, or marine. What kind of ministry could be more authentic, more missional? Every Wesleyan pastor has many of these characteristics. I am deeply proud of the fact that our chaplains are known for, even valued for, their exceptional training, skills, and devotion to practice a global pastoral ministry that truly is Wesleyan, but extends to those far beyond the church.”