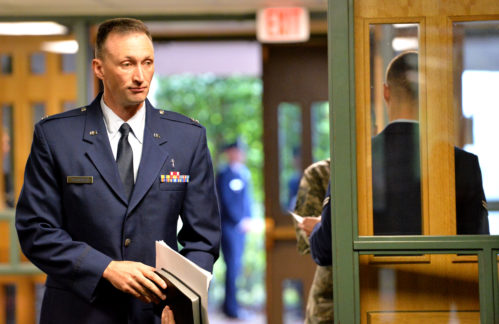 “The award is named after Chaplain Maurice Witherspoon, who served during World War I and II and was on the board of the National Bible Association; he definitely had a love for God’s Word,” Hunsinger said. The award recognizes chaplains of the Armed Forces who demonstrate a unique commitment to Bible reading or encouraging Bible reading in a special way.

To be eligible for the award, a chaplain has not only demonstrated exceptional ministry but also has served in a deployed status during the past year. The Chief of Chaplains for each branch of service selects one recipient from nominees throughout the entire corps of chaplains. The Air Force Chief of Chaplains selected Mark Hunsinger.

During his recent deployment to Southwest Asia, Chaplain Hunsinger visited service members working on the flight line and at various security posts. He conducted numerous worship services, teaching, and spiritual activities to foster a ministry program that was nothing less than outstanding.

“My chaplain’s assistant and I went at least once a week for midnight entry control point visits,” Hunsinger said. “For the flight line, I attended their pre-mission briefings to pray them out the door. A number of the flying crews told me they had never seen a chaplain at a pre-mission brief. Some crews would actually come find me if I was late because they wanted a prayer before their mission.”

The Witherspoon Award was presented to Hunsinger in the form of a framed page of Psalms from a 1611 King James Bible. We express our deep appreciation and congratulations to Chaplain Hunsinger on this national recognition. And we continue to lift up in prayer our many exemplary military chaplains, sent out by The Wesleyan Church, who proclaim the gospel in dangerous places and carry a vital, pastoral ministry to service members around the world.

Gary Carr is director of Education and Clergy Development and chaplain endorser for The Wesleyan Church.